I've mentioned before in this blog the sound effect I call Wilhelm's Car Horn. I'm watching This Is Us right now (the episode after the Super Bowl one--I got a little behind on tv with classes starting and then olympics stuff to watch) and they just had a Wilhelm's Car Horn. Randall is learning to drive, almost runs a STOP sign and a delivery truck swerves out of the way while honking. Try that some time. Swerve your car abruptly while honking. Even if you could manage to do both at the same time, you wouldn't. Not in the moment.

This sound effect was already on my mind because I was thinking about writing about the movie I saw this morning--Game Night--and their use of Wilhelm's Car Horn was just one of the little details that annoyed me. That movie isn't bad. The plot moves along nicely, and there are a few good laughs. But...

And, here is where an interesting thought struck me. I wrote last week about Black Panther, and I said the movie "is good. It isn't great." After saying lots of nice things about the movie and about the real world implications of it. I mean, I liked the movie. And, it's maybe the best Marvel film yet (Winter Soldier hits some cinematic buttons that I really like so that one holds a nice place for me, and Guardians of the Galaxy is just so fun, that Black Panther is in the top three at least for me). But, then I see a piece at The Root that includes a line about white critics who "thought the movie was good but not great, and ranked it somewhere in the middle of the 18 Marvel Cinematic Universe films that have been released since 2008."

Color me another white critic. Even though I do not claim to review films here in this blog, of course. I respond to them, react to them, pick them apart and put them back together.

I also try to acknowledge the difference between my opinion of a film, an objective sense of it, and (sometimes) the importance of it. Some movies, regardless of their quality, make an impact on the world. When an impactful film also happens to be really good, that's a bonus. Wonder Woman, Black Panther , Get Out, Call Me By Your Name, to name a few from the past year.

Now, how did this "interesting thought" that probably feels quite unrelated strike me? When I first heard about Game Night, I wasn't excited for a silly comedy that visually looked a bit too much like Horrible Bosses or Office Christmas Party--and that, maybe just because Jason Bateman is in all three. I was excited because the idea of a bunch of friends getting together for a game night and then everything goes crazy sounded awesome. My friends and I have game nights--haven't had one in a while, though, I must point out in case any of them are reading this entry--and get together for other nerdy things. I talked about this stuff two days ago when I should have been talking about Mr. Mom. But, I do that; I drift away from movies all the time in this blog, write about other things that are on my mind with the film of the day being more of an excuse to write than anything else.

Recently, I have also sped up this childhood deconstruction exercise that has taken over Phase Four of this blog. I hit 1983 and I'm trying to limit myself to just two viewings of each film instead of three (or more). It's hard to run with that limitation and allow for distractions, though.

Today is more of an interruption than a distraction.

I also saw Annihilation yesterday, and that is worth writing about, too. But, I won't get to it. For this blog's terms, I really would have had to get to it yesterday, or I'd have to go see it again. Short take: good film with some great science fiction bits and some amazing horror moments.

(Interruption: I've got Kevin Probably Saves the World on right now, and Nate just suddenly didn't have his keys when he had to sneak out of the house and just this week, I mentioned to someone in a thread on Twitter about a pet peeve of mine with movies and tv--namely, that characters always have their keys and wallets on them unless the plot specifically doesn't want them to. People leave in a hurry, and it is rare that you see them grabbing their keys or their wallets or putting on shoes, because everyone wears shoes all the time unless the plot includes a scene that is about the shoes.

Game Night, given the premise, didn't have this(these) problem(s) much. Except for the main couple. I mean, when I would host game nights at my place in grad school, I would not normally have my shoes on, or my keys or wallet in my pockets, because, you know, I was at home...

Although, oddly timed, slightly ironic timing: I happen to be sitting on the floor in the living room right now, with my shoes on. But, to be fair, it has been rather cold in LA this week, and when I got home from the movie, I left my shoes and socks on, left my extra layers on--I even have a scarf on. This moment is an exception, though, not the norm. I generally take the shoes off when I get home. Socks don't last long once shoes are off, because I don't like wearing them... Even if I do own a whole bunch of nerdy socks that I like wearing, along with my needy t-shirts, when I'm out.)

I'm speeding up because, I think I'm starting to feel like moving on again.

But, I was talking about Game Night and its flaws that I took personally, wasn't I?

For example, Max (Bateman) brings three games to his brother's place when his brother (Kyle Chandler) asks to host game night for a change, and he brings Scrabble, Clue, and The Game of Life. 1) Except for brief clips early in the film of previous game nights, these people only ever play charades or pictionary, which is already a sad game night. 2) There are seven players at this game night; you cannot play Scrabble with seven people, Clue would be awkward and even more annoyingly long than usual with seven people and would be lame with teams, and no one over the age of 10 should be playing The Game of Life (unless they happen to be playing with their kid who is not over the age of 10). The games they play are not even that important to the plot of the film. That they have a weekly-ish game night is just the setup. But, was there no one involved in this film who exists in the 21st century and plays games? I mean, under the main titles, we've got Monopoly pieces and dice (which is fine) but just one damn meeple? Not that the film needed to appropriate newer games or, hell, even aim for some product placement, but it's filmed in 2017, right? People with a regular game night should be playing Codenames or Spyfall, maybe something serious like Eldritch Horror or Betrayal at House on the Hill. Or Catan; tons of people have played Catan by now. Or Secret Hitler. Or Exploding Cats. They've got too many players for a good co-op like Pandemic, but how about just to catch the viewer's eyes and let us know these people are serious about tabletop gaming, you at least have some interesting dice somewhere at the edge of the table, like they just played some Zombie Dice or King of Tokyo. They specifically say that they don't play drinking games--they're more classy than that--or there would be a bunch of better party games they could be playing instead of pictionary or charades. At least--minor joke SPOILERS--their skill at charades actually comes into play at the final climax of act three. But, imagine a more intelligent (but, yes, geeky) script in which at least their knack for bar trivia matters to the story more than just being a flashback to how Max and Annie (Rachel McAdams) met. Imagine a script in which some in-joke about a time they all played Munchkin or they embrace the skill sets of their Mice and Mystics characters to work together in the end, or something with far more depth than the film actually manages. Instead, it's a poor man's The Game, if that David Fincher film got together with something like Identity Thief and gave birth to this one. And, you throw in an entirely unconnected subplot about a wife who--SPOILERS--thinks she had sex with Denzel Washington just before she and her husband got married. And, an extra twist that is almost clever, but then there's a joke extra twist that ruins it a little.

But anyway, this is my brain on movies.

Really, this is just my brain all the time. I might have built up a resistance to movies long ago, which is why I've had to up the dosage over the years. 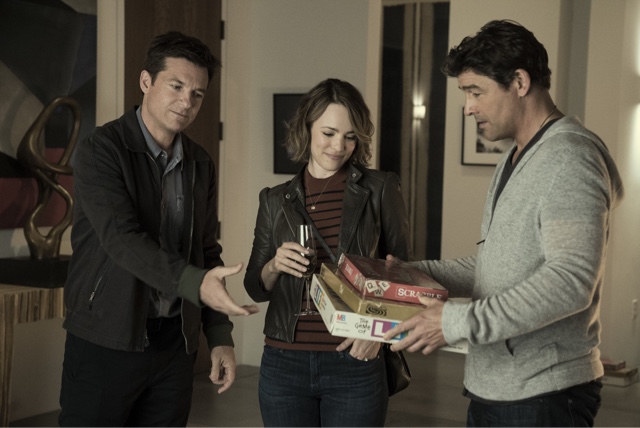 So, probably, tomorrow, I will watch the next movie on my 1983 list--High Road to China, which it has been so long since I've seen it I'm not entirely sure what the plot even is; I know there's a pilot, and a woman who hires him, and they fall in love, and it's Tom Selleck as poor man's Indiana Jones, maybe. Or, maybe I'll take a week off from the childhood deconstruction because the Oscars are next week and I should try to produce something like a state of the industry, or just a measure of the award-worthy films... Like my multi-part diatribe about #OscarsSoWhite (and related Oscars stuff):