With action movies, it's easy. With courtroom dramas. Even with romances. If--and if they had, this movie would have probably been quite forgettable--they had gone ahead and filmed the scenes with Stephanie DeCastro, maybe it would have been easier. But, what makes Phil's situation so hard is there is not clear victory to be had, no simple solution. Chasing after Rita is not dictated by some Fairy Godmother or Magic Mirror. Phil's situation is both entirely his own doing and entirely not. It's simple. It's complex. It's unsolvable. And, eventually, it solves itself.

If the social and cultural and political and ethnic and racial rolls go in your favor and circumstance doesn't set you as an example for everybody else.

The thing is, however silly bullshit American Dream lines feel all too often--you can accomplish anything if you just put your mind to it, you can be anything you want to be and all the similar lies we tell children and teenagers, and college students, and eventually ourselves, in order to get by... However silly those lines are, you cannot really live operating under the conditions that they can never be true. If life hands you lemons, make lemonade, or some other quaint saying. Or, if you're a geek like me, if life throws you a Kobayashi Maru, hack the shit out of the simulator.

Phil's problems are not in his circumstances. In Pittsburgh, he dreams of something better. In Punxsutawney, he dreams of anything different at all. His problems arise from his inability to exist in the moment. Phil Connors is--because of societal pressures, traditional gendered roles, and maybe his own permissive mother (she is in Rubin's draft of the script; I'm not just inventing her to be sexist, myself; but if we must, we can blame Phil's father pushing Phil to excel inasmuch as that pressure falls outside the reasons already given)--programmed to want more. A weatherperson in some smaller town would probably kill for a gig in Pittsburgh. But, Phil resents it. A different guy might kill for all the women Phil gets (again, taking Phil from various drafts of the script as well as what is implicit in the film), but Phil resents it, wants more, wants women he doesn't even know. It is partially because the film is framed as a romantic comedy and not an existential drama, but also because of who Phil is--a lech, a womanizer, a near-alpha male who keeps pushing and pushing to alpha status because the world has told him that is what he is supposed to do--that the first thing Phil does (after the little experiment with Ralph and Gus and getting arrested, and some overeating) to manipulate his situation is to "woo" a woman. To woo her with lies, not because the short timeframe demands it but because that is entirely how Phil interacts with the world. He is a ball of charm wrapped around self-hatred and disgust. He lies with every sarcastic line, with every put down, because it is the only way he can interact with the world that leaves him in pain when he should have everything. 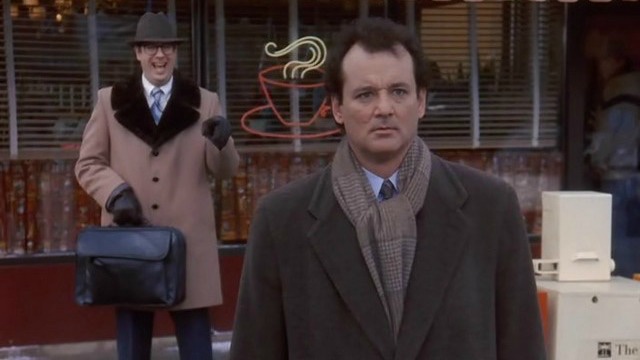 Groundhog Day is a lesson in relative distress, I suppose. We're the protagonist a woman, a queer person, a person of color, the lesson would not work. 1) it would be too close to the reality that person already faces. 2) It would not offer the great fuel of comedy, a person higher than you being pulled down. But, in the midst of taking the successful white guy down, the film also offers a simple truth that, at least some of the time, should allow us to empathize with one another across boundaries like sex, gender, race, etc.

Keep in mind, I write this from the perspective of a white male. I'm not as successful as Phil Connors. I make no play at being an alpha male. But, I am a sarcastic ass sometimes. In this blog, even, I systematically tear apart movies, old reviews, blog entries, at least one doctoral dissertation. I pick apart the corner of the world I have claimed for myself--the territory of Groundhog Day and movie bloggers--because it demonstrates, in theory, that I should belong here.

But, how fucked up is that?

I'd rather be genuine in the real world. The whole blog setup is problematic because, honestly, a disagreement seems like it would be more readable than a bunch of people cheering together. Not that I really ever make an effort to grow my audience. But, I write what comes to mind and conflict comes to mind. This review says Phil's feelings for Rita represent romantic love, I must tear that view down, prove it wrong. That review let's Phil off the hook for messing with Nancy, and I basically accuse him of rape. And so on.

For a more recent example, just yesterday W. Bond wrote a lengthy piece about the film, deliberately coming at it without seeking out other reviews or pieces about the film. It's a nice piece. But, as I'm reading it, my impulse to to debate with Bond about specifics. Like, how can I quote the piece and pick it apart? But, you know what is actually more fun on the Internet of late? Defending things. Examining things, without insulting them... Not that I will give up on insulting things. Nor will my sarcasm go away. But, if I can manage, maybe I will be more consistently positive.

Or just do whatever is fun because this is my time loop and you all are just visiting.