it takes all the romance out of it

And then we move on to a romantic comedy--Kiss Me Goodbye--to finish out 1982. Film critic Vincent Canby (who I don't cite nearly often enough) calls Robert Mulligan's direction and Charlie Peter's screenplay both "humorless" but I've always liked it enough... We'll see how it holds up after having not seen if for many years. 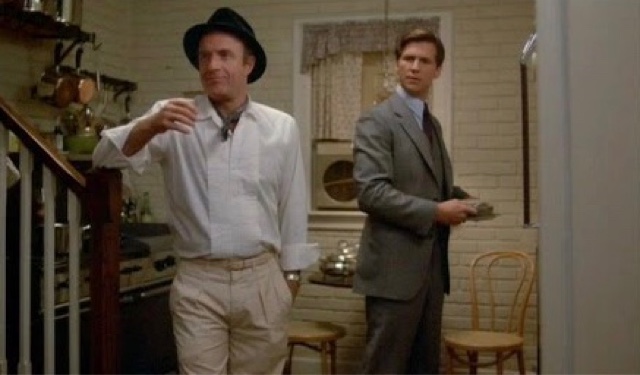 If you don't know the film, it's pretty simple. Kay (Sally Field) has moved back into the townhouse she shared with her husband Jolly (James Caan) because she's marrying Rupert (Jeff Bridges), and Jolly's ghost shows up to meddle in her affairs for a bit. Gags ensue. (Canby argues, the film has one joke--Jolly "sti[ting] around mak[ing] snide remarks as Mr. Bridges attempts to make love to the distracted Miss Field.")

The opening scenes (except for Kay's mother (Claire Trevor) asking if a wall has always been there) doesn't play much for laughs. Kay wanders around the house, we see flashes of the past and hear gentle music and images of and items that belonged to Jolly, a Broadway dancer--Caan does his best Gene Kelly impression, basically. Plus, he died there in the house, falling down the stairs during a party celebrating his winning? being nominated for? a Tony.

Well before Jolly actually shows up, we know that Kay's life with Jolly (and with all the performers they knew) still hold a a big seaway over her life. Rupert is jealous and afraid of her life. Still, she asked him to move into the townhouse with her.

We're 23 minutes in before Jolly arrives, tap dancing. Within a couple minutes, Kay and Jolly are arguing like a married couple can.

Field almost didn't get involved with this film--an American remake of a Brazlian comedy from just a few years earlier. "When I read it [the first time]," she tells the Deseret News, "it was in a rough form. I thought it was too silly." A couple years later, she read it again, and

You always have to ask twice with me because in the morning I'm one person and in the afternoon I'm another. In the first draft of the script, it was simply silly to me and I couldn't find a way to make it realistic.

Making it realistic became the challenge...

...The movie that we wanted to make was a highly sophisticated comedy with a baseline level of reality--not a hard-hitting message but something that people can identify with.

What they made is a movie that trades in silly joke moments like Jolly interrupting Kay and Rupert having sex, or the three of them taking a roadtrip together, and more serious, thoughtful bits like Kay telling Jolly about how she grieved three years ago.