together we’re stronger than apart

One more time: Suburban Sasquatch. If you found your way here because you'd seen it, good for you. You have seen one of the greatest films of all time. If you have not seen it, I am sorry. But, hey, stick around. I will try to take the film quite seriously.

Even though Rick (Bill Ushler) doesn't know his lines and thinks he cannot act without also moving constantly. And that makes it hard to take his character seriously. 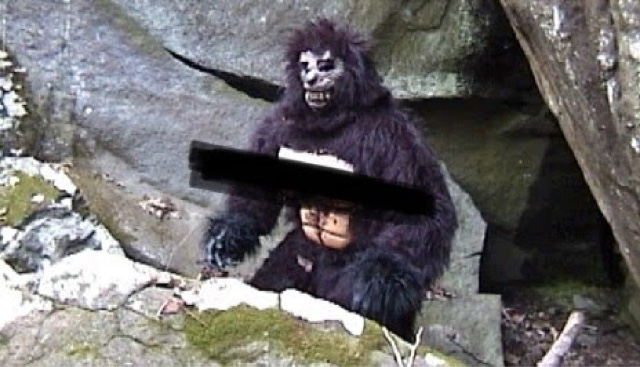 Today's topic: Bigfoot is intersex. See, Bigfoot has notable breasts. And, according to behind-the-scenes footage, the costume choices were quite deliberate and extensive. Bigfoot also has a penis; though you can only barely see it in the film, it is visible in behind-the-scenes footage. Additionally, the coy lack of detail when Talla asks Megan what Bigfoot did to her suggests some sort of sexual violation.

When every modern film (unless it is specifically impossible, e.g. some war film where the entire cast is men) eventually hinges on showing man and woman get together. The classic wedding ending. There's no literal wedding here, but Talla's second battle predicted by her grandfather at the start of the film, she figures, is staying (or going away) with Rick and trying an actual romantic relationship. She and Rick walk off into the sunset (or at least away from the camera) to end the film.

In the backstory, John has been fleeing his own wife's death at the hands of Bigfoot (in Oregon), only to end up in Woodstown (Pennsylvania) where Bigfoot (a la Jaws the Revenge) is back. Talla has foregone a regular life, with a potential husband and kids, to protect people. And, Rick has written stories that have not won him a Pulitzer, regularly visiting his grandmother when he's stuck, because apparently he has little else in his life; his apartment has very little decoration.

In the present, Steve calls in a bunch of hunters (I guess). "We're men," they proclaim before opening fire on Bigfoot and getting themselves killed. Men cannot beat Bigfoot. Nor can Talla on her own. But, man with woman can finally beat nature, form a social bond that is more powerful than some wild beast.

So, basically, Suburban Sasquatch is a critique of intersex individuals, while also equating them with nature. The film sides with civilization. It sides with one man, one woman, ending up together.