I figure most people reading this (unless of course you found it while scouring the Internet for reference to The Pirate Movie) have never seen The Pirate Movie, probably haven't even heard of it. Generic spoof titles get lost in time.

But, The Pirate Movie was actually #5 at the box office its opening weekend. I did not, however, see this movie in the theater. I don't rightly recall when I first saw it, but it was probably as soon as it was on video (not sure how fast that happened in 1982). Apparently, quite a few people saw it in the theater.

The weekend, by the way:

Top fifteen that weekend and I had seen by then, or would see later, thirteen of them. But, you know, nevermind that.

This movie--The Pirate Movie was not my first spoof. That was Airplane! two years earlier. (And, I saw Airplane II in the theater as well, so depending on VHS release, that might've been before I ever saw The Pirate Movie as well.) It probably wasn't even my first pirate movie. I'm sure I'd seen some Errol Flynn movie on tv, though my father was a bigger fan of westerns, I'm sure something like Captian Blood might've shown up on my radar by then. As Hobbes once famously told Calvin (quoting some vague, nonspecific newspaper), "...by the age of six most children have seen a million murder on television." Add movies, and it must be two million. And, I was six in 1982, watching as much of both as I could. And, letting my imagination run wild playing at some of them as well. I may have had a few Masters of the Universe figures by then. And, I definitely had a few Star Wars figures.

(I would get a lot more Star Wars figures in '83 when the Return of the Jedi lines hit the stores, and I would lust after the Dune figures at Toys "R" Us even though I did not get to see Dune in the theaters... But I get ahead of myself. Still, toys, television, movies--they were all tying together for me already. And, while all of that was nice...)

Movies were taking over my existence already.

Maybe it was the private school, the weekly trips to church, all the implications about the end of the world and all that. Maybe it was just growing up in a household where I had six older sisters, most of which were too old to play with me. And, because I went to private school, most of my friends didn't live that close to me. So, it was all toys and stories and, well, stories came from books and tv shows and movies, and my imagination fueled by all those other things. And, the process has kept on going ever since. 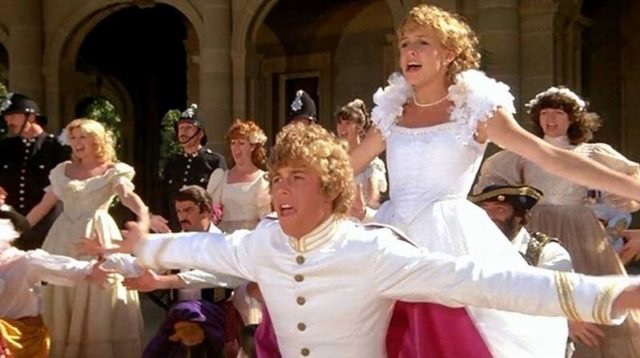 And, I'm neglecting the movie itself. It's got pirates, it's got sword dueling, beautiful women, songs. It's got twists and turns, and a fucking happy ending. It even pulls the worst movie trick in the book, the it-was-all-a-dream ending, except it sets all that up from the opening framing scene with modern-day Mabel (Kristy McNichol)--who, was honestly always more attractive to me in flannel than all her bikini-clad "sisters". She wasn't my first movie crush--that would be Princess Leia--but she was right up there so many years ago, affecting the way I thought of other movie heroines in all the years to come. Just like this movie, with its everything-but-the-kitchen-sink sense of humor and its dramatic stakes about love and life, would affect the way I looked at every movie thereafter. It's stupid and silly so often, but it's also clever. It lets its gags breathe when they need to--like the Pirate King (Ted Hamilton) cutting those candles and failing to blow them down--but also includes the briefest of silly gags for no particular reason but, probably some executive made a note somewhere in the margins of the script--like the brief bit of the Popeye theme, the light saber gag (although, that actually has some thematic resonance in relation to the revelation at the end of Empire), the Indiana Jones bit, or even the silhouettes of the sisters undressing. In my memory of this movie--because it had been a while before yesterday that I had seen it--those silhouettes served to delay the Pirates outside, but Frederic (Christopher Atkins) is the only one who sees it and he is barely delayed.

As a film, structurally, The Pirate Movie works, but it's so intent on undermining its own plot for the sake of a joke that it's hard to even measure it as you would a normal film. One that isn't a sendup of something else.

(Also, it's interesting how the policeman blocking the camera from seeing his fellow policemen beating up one of the pirates resonates differently today that it probably did in 1982.

Also, I don't think I ever noticed before tonight that the policeman being taken care of by several of the sisters during the fight puts his helmet over his groin. Or maybe I noticed the hat, but never realized why.

The second joy of all these old movies from my childhood--beside the comfort of the familiar--is finding the brand new stuff I never got when I was young...)

And, there is so much of my usual standby topics in this film--gender politics and sexism, celebrating the rebel while taming him, tearing down the status quo only to reaffirm it in the end--that was probably getting writ in the back of my movie-addled mind even at age six.