from a certain point of view

And, of course, as I've said with the previous Star Wars films, Return of the Jedi put me on the side of rebellion. The powers that be get a little too authoritarian, you band together and revolt.

For the record, I jumped over to watching Return of the Jedi tonight after watching a CNN Town Hall about gun violence and school shootings. [And, throughout much of the film, there was a conversation going on in the next room about a lot of this stuff, too.] Future readers--on Valentine's Day, just one week ago, a 19-year-old expelled high school student returned to his school with a gun and killed 17 students and teachers and wounded 14 others. Surviving students have been rather outspoken, and if you don't know what side of this issue I come down on, you probably have not been following this blog; I do tend to get into political rants from time to time even under the guise of talking about movies because movies are inherently political, even if only to reinforce (or reject) cinematic standards and societal norms of the time in which they were made.

Return of the Jedi, because of George Lucas, is an echo of an earlier time, a nostalgic recreation of old serials like Buck Rogers or Flash Gordon laid over mythic plot points taken from Joseph Campbell. Also, much of the plot of the original Star Wars (and the ending of Return of the Jedi somewhat) was inspired by Akira Kurosawa's The Hidden Fortress. Writing for the Criterion Collection, Armond White explains: The Hidden Fortress was

a story both elaborate and simple. During feudal wartime, two farmers, Mataschichi and Tahei, have escaped prison camp and are scavenging the wilderness for gold...

Yada yada yada. There's a general. There's a princess. There's a scarred villain who has a change of heart. And...

The Hidden Fortress proves most distinctive when not merely reduced to genre type but rather appreciated for Kurosawa's unique, excited exhibition of nature and different human characters... The emotional satisfaction of this type of epic morality play in which behavior reveals personality proves how effective Kurosawa could be at combining action and purpose, morality and thrills.

With the original Star Wars trilogy, George Lucas seems more interested in the human element (not to be speciesest), that is, interested in the characters as people with inner lives, with their own individual motivations and histories. By the time of the prequel trilogy, Lucas' approach was, to my eye, more clinical. I forget which of the prequels had the behind-the-scenes bit--or maybe it was from an outside interview--in which Hayden Christensen talks about how Lucas actively told him not to emote too much in Attack of the Clones so the emotional climax of Revenge of the Sith would be more resonant. Which effectively turns Anakin, while we are still supposed to care about him as our protagonist, into a cold killer. A mass murderer even. Well before he becomes Darth Vader.

Something I really liked in The Last Jedi was how Luke had changed. I've seen many comments online about how he didn't feel like Luke anymore. Luke was basically a naive, brash, young man with a little bit of a hero complex in the original trilogy. That kind of guy can grow old in one of two ways, I think; he can become an arrogant ass who no one will want to spend time with, or he can learn humility and realize the being a hero is not something you need to, or should, aim for. Hamill's take, and the script's, in The Last Jedi puts Luke somewhere in the middle of the two. In Roger Ebert's review of the Special Edition of Star Wars, he wonders

if Lucas could have come up with a more challenging philosophy behind the Force. As Kenobi explains it, it's basically just going with the flow. What if Lucas had pushed it a little further, to include elements of nonviolence or ideas about intergalactic conservation?

Lucas was born in 1944, which made him just about the right age to join in with more radical student groups when he was in college. Find himself caught up in the Civil Rights Movement, the Free Speech Movement, the Antiwar Movement, the Feminist Movement. John C. McDowell (2016) suggests in Identity Politics in George Lucas' Star Wars a counterculture "context for [Star Wars] to address issues of racial discrimination, prejudice and violence in subtle ways using non-human characters to depict otherness." However, the racist overtones in the Empire remains subtext and even in that, is spelled out in some of the expanded universe novels far better than Lucas puts into his films. Others could read into the use of aliens, but the simpler explanation--that aliens make for a more... fantastic set of visuals--fits without reading subtext where there really doesn't seem to be any. Basically, Lucas' subtlety is really just an inference with little evidence. Charlie Jane Anders, writing for io9, says

Lucas started out as a member of the counter-culture, part of a group of young film-makers who were challenging the status quo in Hollywood, alongside Francis Ford Coppola. He was very much a product of the 1960s counter-culture: His earliest work was Look at Life, an "abstract montage" of still black-and-white images that explore the political tensions of the 1960s. He was one of the cameramen in Gimme Shelter, which was viewed as a West-Coast alternative to Woodstock.

Unfortunately, at some point in the past couple decades (probably when one of my boxes of large books fell (I assume) off the truck when I briefly ventured out of California to try living elsewhere back in 2000), I lost my book about Lucas. This one: 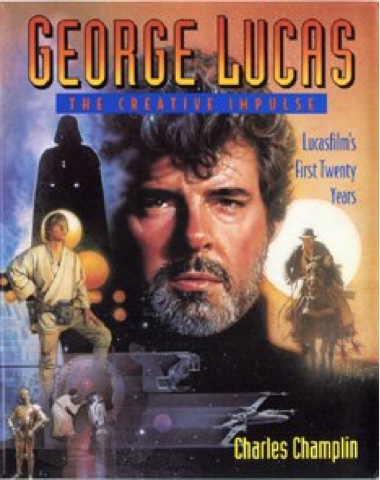 So, I can't confirm the details there. And, Anders' lack of detail (which isn't necessarily problematic in a piece like that io9 one) suggests assumptions that don't necessarily mean as much as Anders is suggesting. That is, Lucas making an abstract film with black-and-white images about political tension could just be the simplest thing to make for him at the time, and there was political tension prevalent on college campuses when he was there, so regardless of the side he was on, it seems reasonable that such themes would find their way into his work. THX 1138, for example, involves a dystopian future. American Graffiti's setting puts it ahead of the counterculture, and it spends its time in a specific time and place, not necessarily drawing on political ideas... Although to to be fair, it has been awhile since I've watched the film, so maybe it was more political than I recall. And Star Wars comes along after Vietnam, after the protest-filled 60s, after violence broke out in numerous American cities (and cities abroad) because of political upheaval and marginalized groups demanding attention. So yeah, it focuses in on a rebellion. But, the Empire, as exemplified by Darth Vader, is a clear evil. The opening sequence has Stormtroopers gunning down soldiers we haven't even met yet, endangering our viewpoint droids and the young princess. Real political subtext is lacking. It's not absent. But it takes a backseat to an adventure in space.

Except, it is there, and I had all three movies in my head by the time I was seven. Empire: Bad. Rebellion: Good. Meanwhile, I'm attending weekly church service and going to private school, and in addition to all their strict rules, I am being told the world is going to end soon. So, there was a nice little thematic soup of rebellion just asking for me to be a troublemaker. And, in that private school, we had corporal punishment, and that kind of thing just made me want to not get caught, it didn't make me want to stop being a troublemaker.