First of all, to my sister Brooke, yes they do have sex. I was thinking of the bit by the campfire when she's wrapped in the blanket and no, they have done nothing untoward just yet. But, after the camera pans up and away, Jim and Jessica act all awkward when next we see them. So, yeah, unlike Matilda and Spur, Jim and Jessica do consummate their relationship. Of course, it's all not only offscreen but presumably quite chaste. Which, it might have been better if there had been more passion to it. As Roger Ebert says of the two stars,

There is... Real chemistry between Burlinson and Thornton, as the young lovers. But it's handled so innocently we never really feel their passion. I'm not asking for torrid love scenes--

Coming off of An Officer and a Gentleman, I must interrupt Roger and say, some torrid love scenes would have gone over quite well with these two. Burlinson and Thornton are both fairly attractive and it would have made an otherwise wholesome film quite interesting indeed. But, back to Roger:

--but only for an acknowledgement that two healthy young people, miles from civilization and deeply in love, are likely to act more spontaneously than these kids are allowed to.

Thornton's Jessica is, of course, being pulled away from civilization toward Burlinson's Jim and the wilderness (per Wright's (1975) fourth opposition). Acting on their youthful impulses is integral to their side of the plot. Jim doesn't ride down that mountain at the end of the film because he's been trained to do that but because he's riding with his horse, a part of the wilderness as opposed to the men stopping their horses because that ride is frightening. Jessica has been raised civilized, though, not in the bush, so her venture out into the wilderness after her father strikes her has to go badly. Nature gets the best of her, and while she hooks up with Jim afterward and presumably will be with him after he returns from the mountain after the end credits have rolled (and per the sequel, she definitely goes to live with him up there), even by the end of the film, she hasn't quite managed it on her own just yet. She has rejected her father's attempt to send her off to live with the Presbyterians, but the last act is all Jim's.

Still, the two of them are playing a youthful game, a duel coming-of-age, like Romeo and Juliet, and yes, it makes sense that they act impulsively, spontaneously.But, onscreen, even when Jim has been trampled by Brombies, Jessica doesn't even see his bruised body without a shirt. 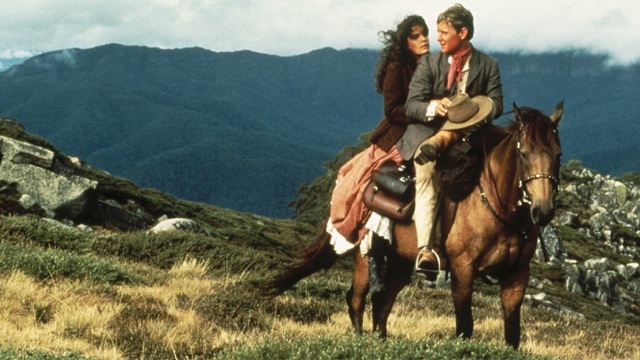 Whether the film shows more or less of Jim and Jessica, clearly the film is embracing young love, but in a nice conservative manner; they will clearly get married and live off the mountain together. The best it can do for Jessica's feminism (or her "aunt's feminist rubbish" as Harrison calls it) is the rejection of being a lady, not a rejection of being a wife.

So, throw The Man from Snowy River onto the stack of movies reifying heteronormative, patriarchal traditions. Not necessarily in a particularly negative way, but that's how Hollywood gets you. Push you backward while making you think you're moving forward. Discuss women's rights and then, of course, Jessica is allowed to choose to run off with Jim because that's romantic.