not everyone follows those ideals

And then I skipped the scheduled film for a day because 1) I can and b) it will line up better with March 2nd being a Groundhog Day day. Instead of watching High Road to China again and try to justify its stakes, I am watching a horrible film that I have never seen in its entirety before. (I have seen parts of it online, particularly because Red Letter Media did an entire "Best of the Worst" episode about it. The film is Suburban Sasquatch.

It starts with bad acting and lazy filming, and then the Sasquatch arrives and hilarity ensues. But, not on purpose. The hilarity is these two getting killed.

Then insert a badly animated CGI hawk and a (supposedly) Native American woman, Talla (Sue Lynn Sanchez) who is going to do battle. The details are vague.

Insert cops, Steve (Juan Fernandez) and John (Dave Bonavita, who also plays the Sasquatch). And a reporter, Rick (Bill Ushler). The cops mention nearby property development and we should know right away there is an environmental theme here. Or there is trying to be.

Two fisherman, who don't seem to have fishing line, get killed next. [One survives, apparently, after getting his friend's arm thrown at him and falling into the river. He wakes up later.] This is where I decide for sure that I love this film.

The reporter talks to his editor (Troy Stephen Sanders)... In what is clearly a high school newspaper room. They are trying. the editor even seems to have his lines memorized; the reporter obviously glances at his script from time to time, pretending it's his "story".

And next we have one of the best lines in cinematic history. A mother tells her son, who saw the Sasquatch in the back yard, that monsters aren't real, "like the boogeyman or your father, they're not really there," she tells him.

Talla shows up again and this scene was not miked. She says... something to the hawk flying overhead.

The amazing thing is that they clearly did some foley work... Or added some purchased sound effects anyway. Two woman hiking in the woods have a conversation that is barely audible--because, again, no mic--but their steps on the leaves on the ground make plenty of noise.

Talla shoots the Sasquatch (with a bad CGI arrow), it runs away, she just says "Damn it" and gives up. And, the film I was billing--to myself mostly--as one of the worst movies ever made is turning out to be one of the greatest. I mean, it never won any awards, nor should it, but there is some deeper meaning in that moment, about the futility of standing up to nature. Like that moment before with Timmy and his mother was all about how we proclaim a certain reality and when something messes with that reality, we have to reject it. Our world is our world, there are rules we learn as kids and the world must stick to them. Otherwise, what good is civilization? What good is school? What good is language? Suburban Sasquatch is basically a deconstruction of our sense of civilization, of the divisions between human society and nature. Talla, with her hawk spirit guide, is somewhere in between, but even she sees the futility of chasing after something like Sasquatch.

Plus, structurally, this is essentially a slasher film, which is my cinematic bread and butter.

Meanwhile, as I'm thinking of grabbing some Carol Clover to make this really serious, Rick goes to visit his grandmother and she is awesomely bad. She pronounces the arrowhead he found odd and tells him to go back where he found it and God will let him know what to do. So, now we've got Christian spirituality added to the mix on the side of civilization here.

Next we have a guy looking for his dog Muffy. Muffy gets ripped in half by the Sasquatch. Then the guy is killed. And we hardly got to know him. But, still, him and his domesticated pet are clearly symbolic, an affront to a wild creature like the Sasquatch.

Then we get a juxtaposition of the Sasquatch eating someone's leg and some woman eating a hot dog. We don't need to know who she is for the deeper connections to become obvious. We're all just consumers, but we (humans) have taken it too far. And, nature is not going to put up with it for long.

So many mainstream movies, with actual budgets and real actors, don't bother to be about anything, but this movie goes all in. Talla and Rick talk about societal norms and so much more. Talla has a mission and doesn't want to settle down and get a husband. Rick is an idiot. Rick is also skeptical, but then he sees the Sasquatch. Who can disappear at will and make psychic attacks on people, and produce fog. It's all very... gloriously strange. 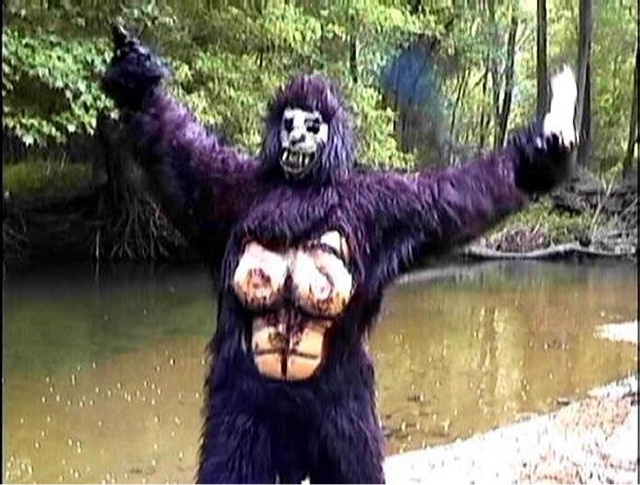