first shot, right out of the box

I'm infecting people. That is to say, I made a guy watch Groundhog Day last night, and I didn't even mean to. My friend Juan heard me talking about the film and my blog yesterday at the tournament, and as he described it, it was like when you get a song stuck in your head. He said today, you "just put it in my head."

Also, yesterday, I got my friend Stephanie to watch the movie for the first time. It wasn't the best of viewing environments, at the ballot table at the tournament, but, hey, at least she's seen Groundhog Day now.

And, if you're wondering about the rest of my Woodstock photos, don't worry, I will get back to them tomorrow. Yesterday, I had some issues with the image coding on my iPad, and correcting single bits of code in the Chrome app is annoyingly difficult. Eventually, I saved a draft, got on a desktop computer and fixed in a couple minutes what had taken about half an hour to deal with on the iPad. 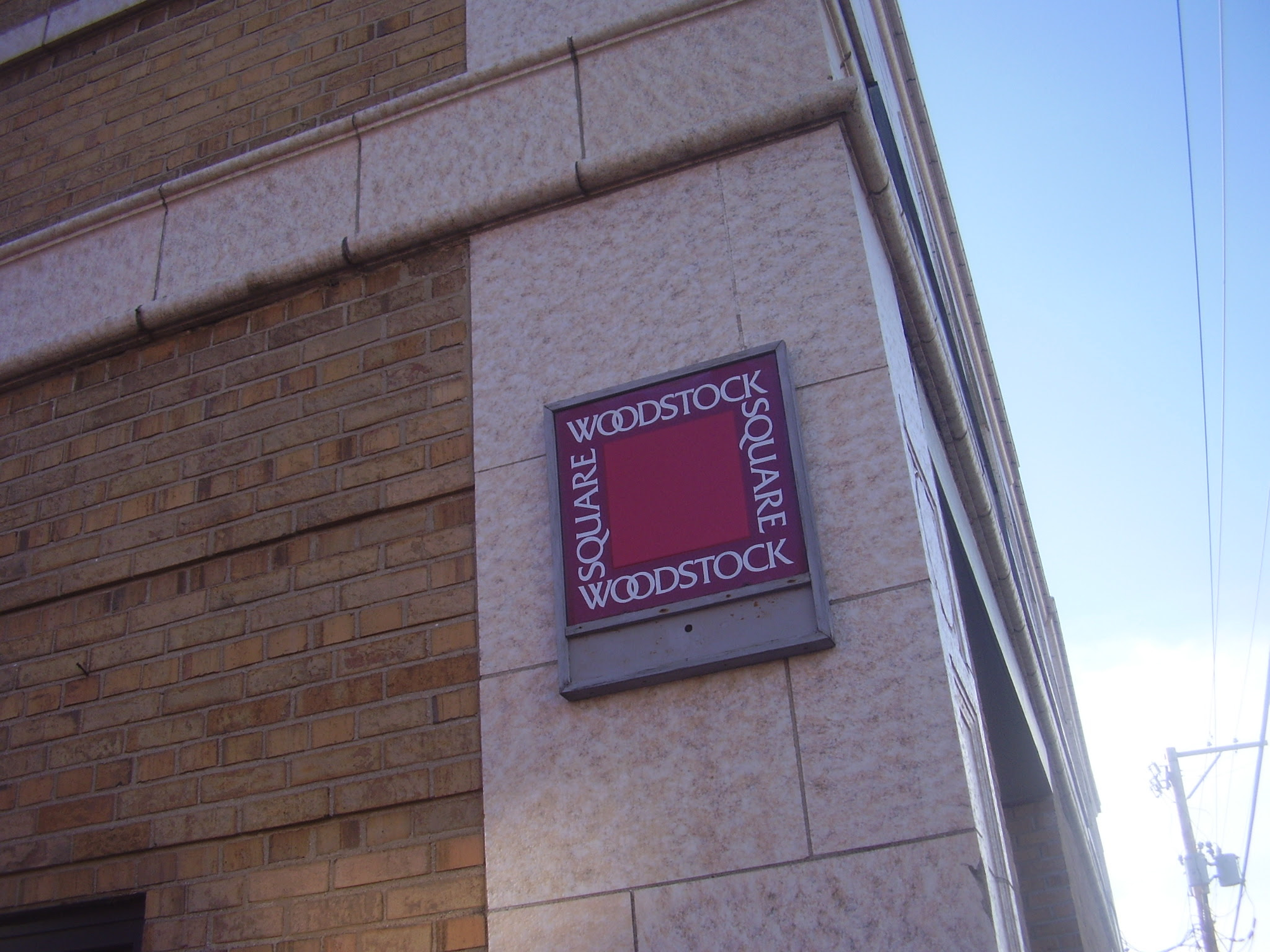 I will return to Woodstock tomorrow.

First, a couple observations from today's viewing (again at the ballot table but this time by myself... mostly; people did come by here and there, and I paused the movie for a while to catch up with my friend Luz). And, these observations--well two out of three of them anyway--come from firsthand knowledge of Woodstock compared to the film.

The news van enters Woodstock by way of Main Street (passing the Alpine Theater (Woodstock Theatre)), turning right onto Cass Street, left onto Johnson and left onto East Van Buren to round the Square and park at the Pennsylvanian Hotel (Opera House). The thing is, without cars parked angled up against the side of Cass Street where the bank is (seen in the armored truck scene) Cass Street is fairly wide. Between the Tip Top (Taqueria La Placita) and Gobbler's Knob (Woodstock Square), there's actually not only a peninsula bit coming out of where the curb (and puddle) was, but also an island splitting the road into two lanes. Now, I mean. But, in 1992 when the movie was filmed, that wasn't there, and the street had a lot of space, but whoever was driving the van--in context of the film, it's Larry, of course--makes a very wide turn so that the van hugs the Square (and those sawhorse traffic thingies) instead of driving in the center of the street or in the (theoretical) right lane). It's not even necessarily a bad turn to make or anything but it stands out to me now.

The other thing is how Punxsutawney mapped onto Woodstock is different than the real layout of Woodstock. The street Phil turns off as he passes O'Reilly (the Old Man) at "Ned's Corner" is South Benton. It's a one-way street right there, heading north. Phil (and the cars behind him) is coming from the north. So, those cars behind Phil are going the wrong way on a one-way street. Now, that's Woodstock. Since we don't see a one-way sign, we can assume that film-Punxsutawney allows cars to go that direction. Thing is, when Phil later drives north on that street (with Ralph and Gus), he's driving in reverse...

And, I imagined myself sounding like the Room 237 guy, nitpicking the layout like that. But, it amuses me that the cars are going the wrong way and the one time a car goes the right way, it's going in reverse.

(Now is as good a time as any, since I don't think I've mentioned it before, to point out that the sound effects for those cars driving behind Phil as he rounds Ned's Corner include the sound of a car ignition starting, not just the sound of cars running.)

The second thing for today is my notes from yesterday's viewing of Groundhog Day. As I mentioned above, it was my friend Stephanie's first time seeing the movie. So, ever vigilant as I am, I took notes on her responses.

She was quiet at first, not making any comments until the movie was in Woodstock/Punxsutawney. Her first comment, when Phil says he's seen Larry eat and shoves his hand in his mouth: "Is Larry bulimic?"

Her description of Ned (which taught me the name for a kind of hat): "He looks like a douchebag in a tribbly." The hat is a trilby, actually, though Stephanie did explain rightly the distinction between Ned's hat and a fedora; a trilby has a narrower brim, usually angled down in front and up in the back.

When I told her that I nicknamed one of the Inner Circle guys "goober" she asked if he goes to Super Weenie Hut Jr's. Apparently, that is a Spongebob Squarepants reference that I do not get. 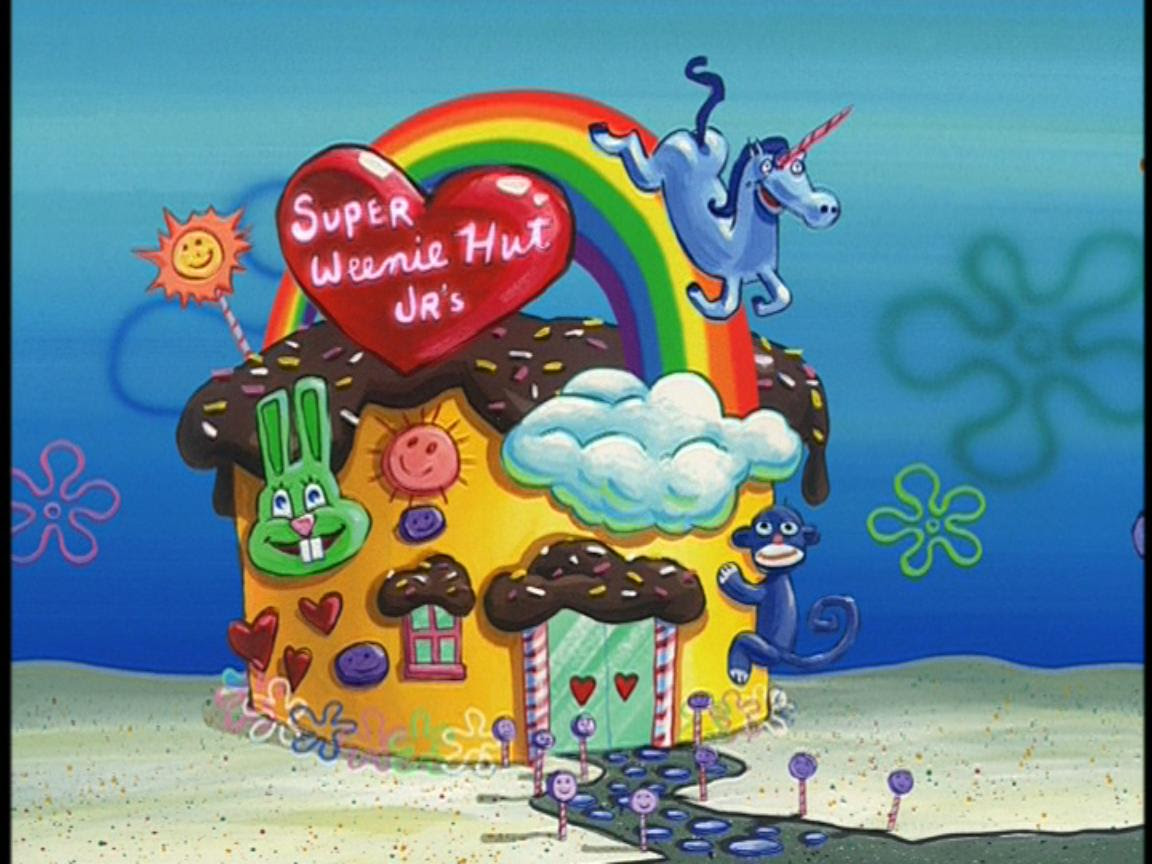 It's a restaurant. I'm not sure why "goober" made her think of that restaurant. As far as I can tell with a quick Google search, Goofy Goober's Ice Cream Party Boat is a separate restaurant in the Spongebob universe.

At some point in the first few days, she asked, "Do I have to hear the polka music 35 times?" And, she noted with dismay that Phil would have years of nothing but cold showers.

The train tracks brought a tangent about Deloreans, because of the third Back to the Future movie, of course. I learned there's some guy who buys any Delorean he can and fixes them up to look like time machines.

Rather excitedly, Stephanie noticed that Phil had flapjacks on his table full of food. Apparently, it was no longer "too early for flapjacks."

Rita wants to know where to put the camera if the whole world's about to explode. Stephanie says there would be no point because no one would see the footage. Makes sense.

Upon realizing this was going to be a romantic comedy with Phil's pursuit of Rita as a central throughline, Stephanie announced--and I was happy--"but I wanted her to die."

Stephanie predicted the "world peace" toast, which was obvious anyway, but the prayer bit made her laugh quite a bit.

Seeing the Local Color store in the background, Stephanie asked, "Is that like where they hide the people from the KKK?"

"Didn't you just ask me that" was not funny.

Rita, on date night, wears a "90s waistcoat" which prompted a laugh from me, then a discussion of a bit of the difference between a waistcoat and a vest.

Into the depression stage (after 8 slaps in a row): "Well look who gave up."

Possibly the best part of the whole viewing with Stephanie, as Phil is showing off his knowledge on god day and I was reciting stuff along with him, Stephanie said, "I feel like you are him." I took that as a compliment.

So, then Phil survives death, and Stephanie says, a little presciently, "this is when you use this to your advantage... try a bunch of ways of dying so when it comes time, you can go as you like." When he proceeds to kill himself three ways on screen: "Good on you for doing it" then "I wasn't supposed to predict that."

When Phil said he couldn't know everything under normal circumstances because he's "not that smart," Stephanie responded, "Oh, look at that--he's being humble."

Rita hugs Phil as midnight clicks and Stephanie says, "time to fuck... or not."

So, then Phil gives all his money to O'Reilly, and Stephanie wonders afterward, when he's gotten pastries and coffee for Rita and Larry for example, how he's affording stuff after giving his money away. I said he could use a credit card or it could be a different day, but she was having none of that. "It's not nitpicking," she said, "it's continuity."

Stephanie--who it occurs to me, I should have told shared her first name with Phil's ex who curses him in the second revision of the script--had no problem with Phil paying Mary (the Piano Teacher) $1000 every day because "why does it matter" if everything's back to normal the next day.

Amusingly, when I suggested that Phil may have only learned two songs on the piano and that's it, Stephanie asked, "what if he learned Rachmaninoff?" Of course, I pointed out, that was exactly what he was playing.

This one I didn't get at first: "Why isn't he African?" Then, she explained it was in response to Rita's line, "I bought you, I own you."

The "end of a very long day line" got a big, sarcastic "wow" from Stephanie. She wasn't impressed by that one.

Phil's "let's live here" prompted this: "Please tell me that was a joke. I'd never want to see that town again."

And, that was that.

Today's reason to repeat a day forever: to screen Groundhog Day individually with everyone I know and track all the responses... in my head, of course, since I wouldn't be able to scribble down notes like I did with Stephanie. Well, maybe I could scribble notes then spend the rest of the day memorizing them.