more than anything else

There's a force in the universe that makes things happen. All you have to do is get in touch with it. Stop thinking. Let things happen and be... the ball...

Find your center. Hear nothing. Feel nothing.

That's Chevy Chase as Ty Webb in Caddyshack. I get the impression from quotations in articles or interview clips that Harold Ramis was a bit zen like Webb. He didn't "want to be the Buddha," though, he told Perry Garfinkel of Shambhala Sun. "I just want to admire him." Brett Martin, writing for GQ in 2009, calls Ramis a "sympathetic, though nonpracticing, Buddhist." With that one character in Caddyshack, with his own understated performance as Egon Spengler in Ghostbusters, and most obviously with the entirety of his cinematic masterpiece Groundhog Day, Ramis infused his films with a relaxed sort of zaniness that makes them hold up quite well long after the fact of their releases.

Despite his success, he didn't particularly buy into it like many in Hollywood might. In fact, as part of his search for centeredness, he moved back to Chicago in the late 90s to get away from L.A. "He's the least changed by success of anyone I know in terms of sense of humor, of humility, sense of self," Second City founder Bernie Sahlins said of him in 1999 (quoted in the Chicago Tribune this morning). "He had enormous success relatively, but none of it has gone to his head." In the Los Angeles Times, 12 February 1993, Ramis says he suffers from "the impostor syndrome... It's hard to believe that any of us deserve the life that some of us are living. I mean, I think I would have been happy being a production assistant. On the other hand, having been involved even tangentially in some of the films I've worked on, and given the public's deep love for some of them, I feel I've earned this little footnote in film history for at least two, if not four of them."

I imagine Harold Ramis, perhaps, as "too humble to know he's perfect." Well, maybe he wasn't perfect but as a comedian and a filmmaker he ranged from adequate (I will admit I haven't even seen many of his films from the last ten to fifteen years) to brilliant. For example, Caddyshack, which I just watched to start a mini-Ramis/Murray-marathon tonight, has its weak moments and it meanders and wanders--

(Sean O'Neal at AV Club points out how this "rambling improvised style would prove to be an influence on whole generations of comedies to follow." For example, Martin suggests, "Without him, there'd be no Judd Apatow, Seth Rogan, or Will Ferrell... Any doubts that Ramis is a founding father of modern comedy were most recently dispelled when Judd Apatow cast him as Seth Rogan's actual father in Knocked Up.

(I'll forgive the misuse of "actual" there... this time.)

Apatow calls Ramis, in the Chicago Tribune today, "the nicest man I've ever met, and he taught me so much about comedy and about spirituality and about being a good person." With films like Groundhog Day, he taught all of that to a whole lot of us.)

--and resolves some of its plot points a little too quickly--I'm looking at you, pregnancy--but the jokes still hold up more than three decades later and it makes some points in passing about classism that still feel current. O'Neal tells us how Ramis' love of improv "led to the film being gradually overtaken by Rodney Dangerfield, Chevy Chase, and Bill Murray, as Ramis, to the irritation of some of the more formal actors, let them run wild." But, the anarchic feel of the whole movie works. It embodies a strange place on the brink of 80s excess and it relies on some seeming amateur actors in major roles but just keeps moving forward despite its flaws. It's like Phil Connors in that way.

Nathan Rabin at AV Club describes it like this:

Caddyshack was very much a film of the moment; it even boasted a requisite Kenny Loggins soundtrack. But like a surprising number of Ramis' films, it's proven strangely resilient. Critics tended to dismiss, if not deride, Ramis' '80s comedies as 'merely funny,' but making generation upon generation of audiences laugh, as his best films do, is a hell of an achievement.

Ghostbusters, which has just ended as I type this, seems far less dated, except for its own requisite '80s film bit--the montage. And Ramis proves a far better actor here than in his brief appearance in Groundhog Day. His great part in Groundhog Day is not that brief bit of acting, anyway; rather, it is his writing (credited along with Danny Rubin, of course) and his directing, using a lot of rather still cameras, patiently allowing for the action to run its course... much like with his earlier, more manic comedies, except with a much more grounded reality in the frame. 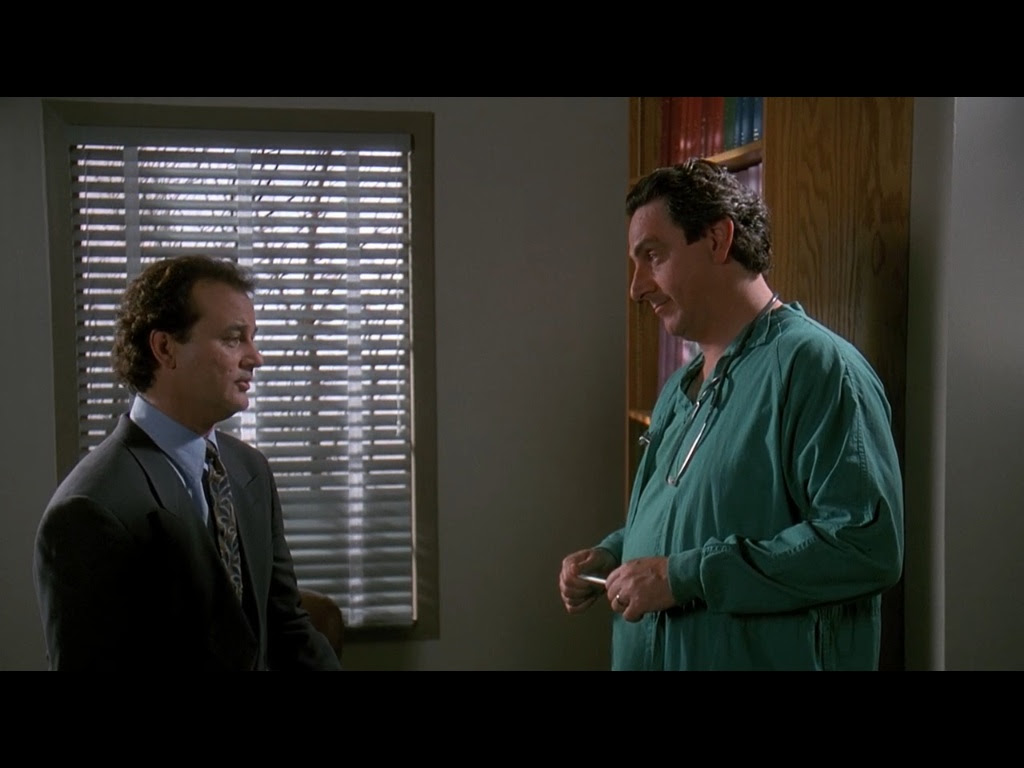 Another film I may watch later this week is National Lampoon's Vacation--a staple of my childhood because it was one of the first films we had on videotape.

...and I don't want to just review his films. I think the measure of a man should be something bigger than and separate from what he produces in his work (though artistic work is certainly part and parcel of the artist responsible moreso than some modern work is, obviously). Ramis fascinates me because he is that "nonpracticing" Buddhist. Because he seems to have figured out a lot of life a long time ago. Tad Friend, writing for the New Yorker, 19 April 2004, describes how Ramis, after finding financial success in the 80s,

began, in the L.A. way, to look inward: he tried couples therapy, family therapy, parenting therapy, past-lives therapy, and personal therapy; he divorced and remarried; he lost forty pounds on a liquid-protein diet and then regained it and more; he joined a men's group--the Road Kill Men's Council--and became something of a Buddhist. In all, he has resisted the claims of late middle age. When Violet, his daughter from his first marriage, gave birth recently, Ramis declared that he wished to be addressed not as Grandpa but as GrandDude.

Me--I write this blog, I watch Groundhog Day. My inward turn--the latest one anyway--I owe at least in part to Harold Ramis for what he put together here. Phil is trying to win over Rita at dinner as I type this particular sentence.

(Note, not all of this entry was written in the order you will read it.)

And, I get the feeling I actually want to turn more outward again. I've written lately about thinking about wanting to be in a relationship again. And, just tonight, reading about Ramis' various films as writer, director and/or actor, I realized I take some of my teaching cues from Murray's counselor Tripper Harrison in Meatballs, who Nathan Rabin in GQ calls "more of a peer to his campers than an authority figure." Inward is fine... is necessary. But, eventually, like Phil Connors in Groundhog Day we must act for others. For me, on an immediate level, that's my kids. But then, there's also my students, my friends, the rest of my family... readers of this blog... the people of the world if ever I were in a position to do so.

I don't figure Ramis for one who desperately resisted death when it finally came just about 23 hours ago. I'm sure that he knew he'd done well for his life and he felt loved by his family, his wife Erica, his children Violet, Julian and Daniel, and two grandchildren. Ramis had suffered from autoimmune inflammatory vasculitis for some time now. After an infection led to complications in 2010, he had to learn to walk again. In 2011, he had a relapse of the vasculitis. In Woodstock, on Groundhog Day, Bob Hudgins told me Ramis' health wasn't good. It is fitting, I suppose, that his death comes at the end of the month that begins with that holiday, and with his greatest film. Richard Alleva, writing in Screen, 26 March 1993, called February "the season of non-celebration, of colorlessness, of stasis." At least, that was February before Groundhog Day. I hope Ramis' february was full of color.

In the aforementioned Los Angeles Times, 12 February 1993, Ramis says success "gives you a tremendous sense of validation, but at the same time you suffer the possibility that the next thing you do will be awful, and you have to face getting older and I'm really not looking forward to being 77 and being out there directing 'Caddyshack XII.'" If there's a silver lining, he doesn't have to face directing derivative sequels into his old(er) age. Instead, he leaves behind a filmography, Brett Martin in GQ describes like this:

You'll not only find the subversive classics that made his name (Animal House, Meatballs, Stripes, Caddyshack), the secondary cultural landmarks (Ghostbusters, Back to School, National Lampoon's Vacation), the masterpiece (Groundhog Day), or even the more recent commercial successes (Analyze This); you'll also see stuff like Bedazzled and Mutliplicity--films you might be surprised to find yourself laughing through if you take the time to watch them. In three and a half decades of making movies, Ramis has hardly made one that doesn't qualify for iconic status, or at least regular television rotation.

Dan Aykroyd is quoted today on CBS Chicago, saying he "was deeply saddened to hear of the passing of my brilliant, gifted, funny friend, co-writer/performer and teacher Harold Ramis. May he get the answers he was always seeking."

I figure the guy who made Groundhog Day already had a lot of the answers... if there are any. His cinematic legacy will live on and he will be missed. And, I regret that I did not have the chance to ever talk to him for this project. I think he would have liked the meditative, repetitive nature of this thing.

Today's reason to repeat a day forever: ...I will forego the obvious, trying to keep people from dying. As Phil learns in the third act of Groundhog Day sometimes that is a pointless exercise. If we didn't have death looming off on the horizon, life wouldn't have the value it does. If we're lucky enough or bold enough, we live life to the fullest. And, when death comes for us, we face it with dignity and resolve, knowing that we have lived. So, no, I would not unnecessarily try to keep anyone from dying. But, for those who I cannot save, I would be with them, to be sure they are neither panicked nor confused. I would give comfort where I could and maybe rage along side those more resistant to death because it is too soon and they haven't managed to live the life they want to live just yet. Whatever makes the passing easier.

And, I would save from death entirely those who I could, of course. But, that's kind of a given.