- June 14, 2020
RoboCop is a movie where I'm sure I didn't get all the satirical elements when I first saw it, but it was science fiction, and full of violence, soI loved it...

And, I can't even start by reminiscing because, the news report and commercials that start the movie are amazing. The anchors talk about potential nuclear conflagration in Africa with the same cheerful tone as they talk about the President getting accidentally left in zero-g visiting a space station. And, then there's a commercial for branded artificial hearts. And, then they get to the news reports that will actually matter to the plot. Then armored cops, locker room, casually co-ed and before 11-year-old me can even be excited by the casual nudity, it's brought down by talk of strike and removing the name tag of the recently-killed Frederickson. Then we're off to a corporate meeting--but this is the folks running the police and that was a crazy idea to me even if I didn't fully understand its implications. And, looking backward now, it's even crazier. 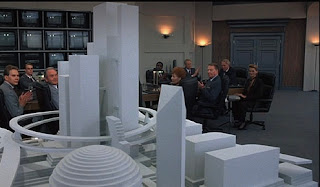 But, then they're talking about rebuilding Detroit, and all these years later, that still hasn't happened, and there's poisoned water to boot.

And then ED-209. With a "typical arrest and disarming procedure" that goes, as far as we know watching this in 1987, badly, but it's 2020, and cops using lethal force feels far more, unfortunately, normal.

Even as I'm aiming for the obvious segue into talking about the present, ED-209's feet are the wrong angle on the floor and the effects made me laugh for a moment. And then Bob's talking about the RoboCop program and we're only 13 minutes in and so much has happened in this movie so far.

And now a robbery in progress and Murphy and Lewis are on it. (Interestingly, on the police radio, they call it a 211, which is California code for robbery, but as far as I can tell with a quick google search, is not the code for robbery in Michigan. The would be (or definitely is now, at least) a 1200.

And the criminals fucking win. Murphy's hand explodes. Murphy is killed, and this movie has places to go, and things to say. And, I'm stuck in my 2020 head (like I was with Dragnet and wondering how this movie influenced the fantasies of other kids like me who have now grown up to be cops and they see themselves as the last defense between lawless, organized criminal gangs like Boddicker's and not, you know, regular people trying to express themselves in a world where the systems and organizations in power make them feel constantly and consistently small.

And right when I think I'm on a roll to where I thought I'd be in this blog today, we get to that moment where they attach the circular LED to RoboCop's face in a POV shot, and screw it in, and there is nowhere in the mask we see on him later, or on his face underneath--which we also see, so clearly his face is intact beneath--that the LED makes any sense, and they're showing off his arm and celebrating him getting up and walking, and I want to start an angry rant about police officers and how we throw money at policing like it's the fucking military


(which I think it's more obvious we throw too much money at that one, but I'm sure there are plenty of right wing folks who thinks somehow our massive military-industrial complex is the best use of our tax dollars, but, hey it's my blog, so fuck those people)

and we cheer when RoboCop shoots a guy in his genitals for assaulting a woman because America loves it reactionary poses far more than its preventative ones. And, I'm one of those cheering in 1987 because I've been raised on Christianity, Reagan's Cold War politics, and 80s action movies. So, you know, 1987, it's fuck that guy, whichever criminal we're talking about here, and go ahead and shoot him, society is better off, except society is better off if we can keep people from needing to resort to criminal behavior, and it's sad that we don't try.

An aside: the dancing guy catching Leon's gun and then just keeping on dancing is a brilliant satirical moment.

But it's also a sad moment, if you really think about it. Organized crime, street gangs, muggers, rapists, drug dealers, mass shooters--we imagine a ubiquity of crime, mean world syndrome, and we assume this stuff is everywhere. We don't think about why criminals are criminals. We don't care. As long as someone keeps them clear from us (and by us, I shouldn't need to say in America, I mean white people, especially in the suburbia) we are just fine with inordinate spending. Throw money at a problem after the fact or before the fact, doesn't matter to us as long as the problem stays on the other side of the tracks, and we can keep dancing, even when a stray gun might come flying our way.
1980s blog childhood deconstruction defund every day film films funding groundhog day project military movie movies police politics robocop taxes