all we did is survive

My friend Shari mentioned that one of her problems with Rogue One was that lack of character arcs. And, then I went out to see Dunkirk. And, while I'm all for characters getting arcs and getting their own little stories--and I think I've made the point more than a few times in this blog that I can appreciate the arcs of characters beyond what the finite limits of a particular film allow--but sometimes, 1) I think that a certain kind of story doesn't necessarily need characters to really change as such and 2) you really shouldn't look to Star Wars movies for serious character arcs, anyway. (Sure, characters have their plot arcs, but their changes are shallow, more plot-driven than personality-driven.) 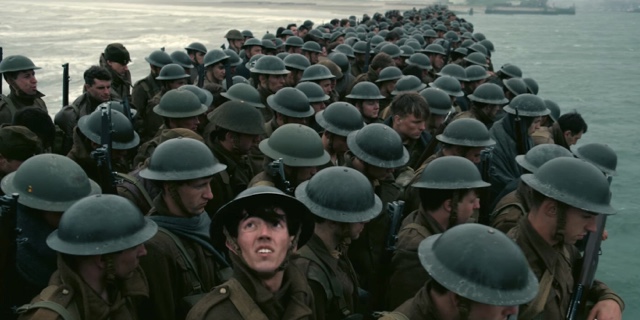 And, Dunkirk makes fantastic use of its actors, and offers up characters that are easy to follow, relatively easy to care about, and situations that are both simple enough to follow and surprisingly complicated at times, with sequences cut together out of order just as the story gets more complex, more difficult for the characters...

I should explain that.

Nolan's latest starts with a bit of the stuff that I'm starting to get tired of in film--a bit of text to describe the setting, because the general audience is apparently made of idiots. Except, Nolan actually plays with the text a little, by intercutting four lines of text, one at a time, with the opening action, and the last couple lines are something like "waiting for deliverance" cut to action "waiting for a miracle" and it's clear before we've even really seen the horror of all of these soldiers stuck on the beach that this isn't going to go well. (My primary complaint with Dunkirk, actually, is that the film doesn't follow enough characters who don't survive... And I guess that's a minor SPOILER. Oops.)

So then, we get a few subtitles early on, setting up three interconnected and eventually overlapping stories: "1. The Mole | one week" "1. The Sea | one day" and "3. The Air | one hour." Essentially, each of these stories takes as long as it says, and they all end at about the same time... Well, the "sea" story extends past the others (and past its "hour") but the times all connect together just before the end of the film. Nolan's choice to overlay these differently paced stories on top of one another as if they are concurrent (when anyone paying attention will figure out fairly early that they are not) creates a strange sort of beast. A few times, we see scenes we've already seen, but from a different perspective. Other times, we see characters--notably Cillian Murphy's "Shivering Soldier" (so many of the characters go unnamed, which adds to the effect I'm about to describe)--already changed (but not in a character arc sort of way) by events we have not seen yet... Actually, another minor SPOILER, Murphy is tangentially connected earlier to the "one week" story, but we never actually see what happens to him to get him to the "one day" story; we just know it was bad, the ship he was on went down and he was the only survivor. We see well ahead of time (in the "one hour" story) what will happen with the young men fleeing the beach in an abandoned boat in the "one week" story, but it doesn't ruin the story, because this story is not built on the cohesiveness of its time, nor the specificity of its characters. It is built on something more like the idea of the chaos (including the chaos of time and the experience of it) surrounding these events, which are a series of repetitive attempts to leave Dunkirk and attacks stopping those attempts. Young men fleeing a war their losing make it onto ships, then those ships go down, and those young men have to find a new way to leave. It's simple. And so is its repetition, and the cycling of these three layers over each other adds to both the simplicity of understanding and complexity of presentation of the action.

And, I hope that made sense.

For the soldiers embarked in the conflict, the events took place on different temporalities. On land, some stayed one week stuck on the beach. On the water, the events lasted a maximum day; and if you were flying to Dunkirk, the British spitfires would carry an hour of fuel.

To mingle these different versions of history, one had to mix the temporal strata. Hence the complicated structure; even if the story, one again, is very simple.

Coming back to the top, though, Dunkirk doesn't need characters to change through the action. These are human beings afraid for their lives, or setting out to defend others (afraid or not). There is no act one setup to establish characters before the action gets going. Tom Hardy's Farrier, a fighter pilot in the "one hour" story, starts the story setting out to protect other soldiers and continues to do just that. There are plot arcs but his character doesn't change. Even--bigger SPOILER, but slightly vague--the very end of his part of the story doesn't really represent a change, because we had no reason not to expect that he might sacrifice himself in such a way. Mark Rylance's Mr. Dawson sets out to rescue men from Dunkirk and does that. We get to know him a little better as the action goes on, but that is not the same thing as a character arc. Fionn Whitehead's Tommy and Aneurin Barnard's Gibson start the film wanting to flee and spend the film trying, again and again, to do so. These are soldiers. Or good men (and women, though we barely see them) going to help soldiers. There doesn't need to be scripted depth. There doesn't need to be arbitrary arcs put upon them separate from the action. I had a thought, perhaps unfair, after the film. Pearl Harbor is what happens to a story like this when you put arbitrary character arcs onto it. You get cheap romance, shallow interpersonal conflict, and the historical action--arguably the point to making the movie in the first place--gets shunted to the side...

That being said, playing soldiers and the like too simply results in crap like the ending of Behind Enemy Lines where Owen Wilson randomly decides he really likes being in the Navy because reasons. Kenneth Branagh's Commander Bolton, for example, sticks around at Dunkirk in the end (not much of a SPOILER) to help the French troops leave, which is nice, but somewhat arbitrary as we've spent no time getting to know Bolton, and this action is not a surprise, or something out of character. It's just good soldier is good solider, too simple. And, could actually use a little more depth to the decision (or maybe Bolton is based on a real guy and that choice was a big deal in history; I don't know enough about the history here to be sure.)

As I said, I love a good character arc. I love a film that takes its time and let's characters grow and change. And, while I liked Rogue One, it was definitely a flawed film. I imagine a longer version, in which we really get to know Jyn and understand why she was a criminal, why it makes sense to turn from criminal to rebel (separate from the obviousness of the plot point of seeing her father killed), get to know Cassian and see how this guy who murders a guy in his first scene (and, like Han Solo, who kinda did the same so many years before, there is little reason for him to be a better man later; it just happens), get to know Chirrut and Baze and appreciate their relationship even more, see why their sacrifice makes sense... I'm reminded of Glory, a very different, historical film, but one that also ends with (SPOILER for a two decades' old movie, and for history) the characters all dying, but there has been more character-driven buildup, we've gotten to know Shaw and Trip and Forbes and Rawlins and we've come to care about them... Then again, that's a problem generally with newer films compared to older ones--storytelling has changed, simplified, because so many of the beats have been hit so many times in so many films that we don't need to linger on them anymore. But imagine a version of Rogue One that does linger on its beats, that spends time with the main characters on that ship, having just seen Jedha City destroyed, and they actually have to deal with that fact, deal with what it means, and let the gravity of it sink in. But even that is not a new problem. Alec Guinness had some gravitas to him, to be sure, but Alderaan is destroyed and all we get is one old man having to sit down? Old men sit down all the time. Where is the meditation on the horrific reality of an entire planet being destroyed, millions of lives being snuffed out? Similarly, in The Force Awakens, multiple planets (or moons or whatever; don't go to Star Wars for science that makes sense) are destroyed and they might as well just be a handful of deaths. Or one. The film has no time to really consider the impact of most, if not all, of its horrors.

Dunkirk, on the other hand, by keeping most of its characters nameless, or nearly nameless, universalizes the various attacks to create a very repetitive horror in vivid detail. Not much gore, but plenty of explosions and men drowning. And, the sound design--some of the scenes are hard to watch, and rightly so, because of the way gunshots and explosions and the creaking of metal tears through the silence. (And some sequences go virtually without dialogue, so there is a lot of silence as well.)

And now, I kinda want to watch The Lord of the Rings again, all half a day of it, or however long it takes to watch all those extended versions. Because, there's a fantasy film that (because it's a trilogy) takes its time, lets its characters live a little, and also pauses from time to time to linger on the horror of what's going on.