and everything is more real than life

Watching Sing Street again, mostly because I really need a break. From politics. From the world. I want to spend more time out and about with my kids or with friends. I have an inkling to try dating. Or something. (Details I don't feel like putting out into the world in a blog entry... For a change.)
Also, I love this movie. It's structure so simply, like a romantic comedy built on a musical foundation, Once but with teenagers, and set smack dab in the middle of the 1980s (though it gets the timing of some of its historical references off a bit), and it's sweet and simple and entertaining. It has it bittersweet moments and it has its happy bits, too. And, like Once, it makes a good case for the idea of how varied people can come into your life, have some significant, life-changing effect, then maybe they just go away, disappear, and you're stuck by yourself for a time, or with new people, other people, other influences and life-changing effects, and the tiniest chances and interactions can be the most profound.

I've apparently never written about the film Once for this blog, but I did say a bit about the stage musical version back on Day 349, using it as a jumping off point to talking about romantic love, and a sort of counter to Groundhog Day... "I think of Once as almost the perfect love story," I wrote, "because the main characters don't end up together. Love doesn't have to last to be powerful." I claimed a hopeful mood rather than a cynical one in pronouncing, "Romantic love doesn't last anyway." And I proclaimed that, at the time I was writing that, one year of grad school behind me, my marriage all but behind me, "Life, generally, is good."
That's still true.

And, I'd compare it to Conor's life here in Sing Street. His parents' marriage is ending, his brother has hit a bit of a dead end with his life, and his sister... I swear she says something early in the film that she wants to do with her life, but then she mostly disappears for the rest of the film, so it's hard to say how much her life weighs on Conor. But, what does weigh on Conor is his new friends at his new school, his band mates, the girl he starts the band to impress even though she's older and has a boyfriend, and I find myself relating a little too much. Live, have the right circle of friends, and any stress can be dealt with. Have enjoyable pastimes and you can get through most anything. I just need to start a band... Metaphorically, I mean. Do that thing that impresses the girl. Or gets me a more concrete, more successful future. And, while that bit just now about impressing the girl was no such the adulting, that bit about a successful future might be one of the more adult things I've ever written here. Like, I'm actually thinking about my job and the future and what I might want out of my personal life beyond impractical daydreams. It's weird. I feel more often like Conor at the end of this film, like I would just love to make some stupidly grand gesture to advance my life, risk everything for something potentially great.

Except, that's not really me.

It's just an idea.

An idea fueled by too many movies. Too much scripted reality. Like you can run off to follow your dreams and they will actually come true. You can do something--start a band, chase after a girl, whatever--and there will be so little competition--conservation of characters and whatnot--that of course you're going to succeed. Unless this one film is the cautionary tale. But, then you're probably still going to be legendary. 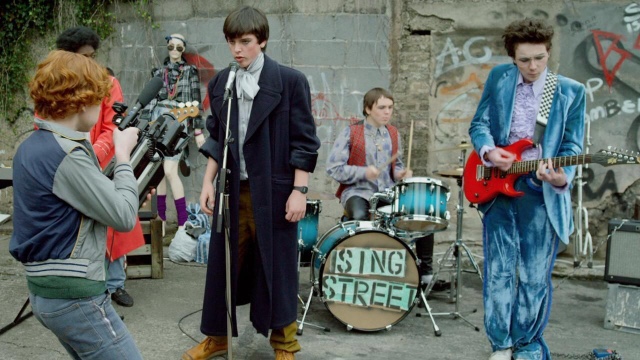