i'm doing what i want to do

I've written before about The Room--Days 609 610 611--but I wanted the movie version of comfort food tonight. I considered a bad horror film, but the one I picked just happens to be about the only movie unavailable on my various means of watching movies.

Anyway, The Room starts out nicely enough, establishing shots of San Francisco (bought on the cheap, I'm sure) and it feels like a good indie drama. But then Tommy Wiseau has to get the first line of dialogue--"Hi, babe"--and the bad acting gets going. Then, the various "actors" compete to see who can be the worst.

And, something I always liked when I was watching Groundhog Day day after day was when a new detail would jump out. Tonight, watching The Room, I got stuck on a line from the song during the first sex scene, you know the one that comes in the first five minutes of the film when we've barely had any way to get to know these characters and certainly have no reason to care about them or their lengthy sex scene. The line: "I will stand in the way of a bowler." Because that is the most dangerous thing you can do for love. 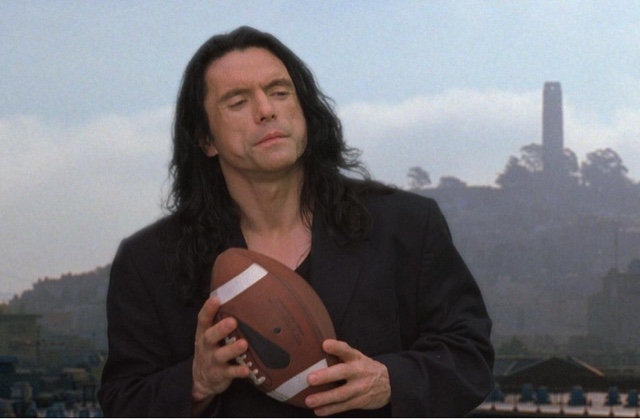 And, it's not like the movies doesn't deal in a few brilliant bits of symbolism. Tommy's obvious rose fetish in bed, but then Kitra Williams' song comes on during Lisa's sex scene with Mark, with the classic line, "You are my rose." Denny eating an apple--universal symbol of temptation--before he jumps into bed with Johnny and Lisa. And, then there's the pizza Lisa orders--two different sets of toppings because she and Johnny are drifting apart (well, she has already made it clear that she doesn't love him anymore, anyway); they eat separately. And, how about the football that the guys throw around? If that isn't a clear symbol of modern American masculinity--which here is being challenged by intermale conflict, by manipulative women... This movie is basically a really poorly done male melodrama.

As Peter tells Johnny: "Sometimes, life gets complicated. The unexpected can happen. When it does, you just gotta deal with it." And later: "People are people. Sometimes they just can't see their own faults." The movie tries so hard to be about something. Either the guy's side: women are manipulative and masculinity is under attack. Or Lisa's take: you have to do what makes you happy, live your life how you want to live it.