another time for war

Moonrise Kingdom, another Wes Anderson film, is playing right now. I was going to write about the deliberate artificiality again, how disconnecting the audience from what a film should be, and is expected to be, draws the audience in. But then I saw Detroit today, and I was inclined to get into a sociopolitical rant...

But I've been trying to avoid that all month. I've even been toying with musical's or bad movies for next month, keeping it more enjoyable than triggering. 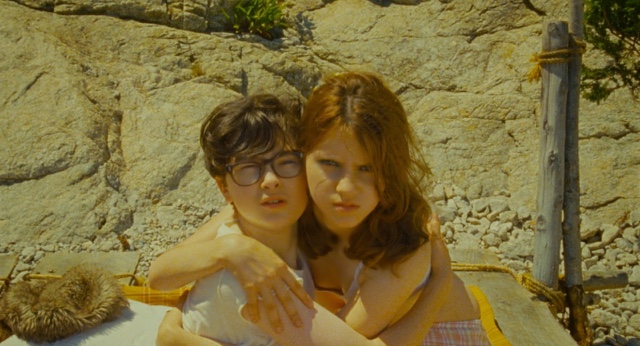 And I find myself sitting here just watching Moonrise Kingdom... I should be ranting. I should be raging. And people should see Detroit when it's in wider release next week and they should rage. We should all rage. We've got a president who asks what's going on in Chicago (with its high murder rate) and it seems like he really has no fucking clue why 1) poor people might exist, 2) why anyone would turn to gangs or violence to get by, 3) why systemic racism, and significant economic upheavals and industrial changes might have twisted the sounds of certain cities to the point that there not only will be but must be unrest and 4) stomping down on crime and poverty with increased use of force by the police doesn't solve anything, it just delays a (likely larger) explosion of unrest. But, he's rich. And he's rather unintelligent, with his limited vocabulary, tendency reward self-aggrandizing tangents, and his incessant need for loyalty and praise.

Meanwhile, Moonrise Kingdom, and the young love at its heart, is adorable, and distracting. Pleasantly distracting.

But, I'm distracted in other directions as well. Like an arcanist in Patrick Rothfuss' Kingkiller Chronicles (the second book of which I'm in the middle of reading), my mind is divided. I've got my teacher section, my movie section, my political section, my relationship section, my D&D section. Different sections step up at different times. And, on a really interesting day, multiple sections all scream for attention. And I try, sometimes poorly, to hold one or another down. Politics is screaming. Transgender troops to be banned from the military. A wall to be built on the border with Mexico. Healthcare being gutted (or attemptedly so, anyway) and, you know, fuck all the poor people for being poor and daring to be sick at the same time. Fuck everyone who dares to be gay or queer or anything but heteronormative, because how dare you be anyone outside the ordinary. How dare you be anything but a man or a woman, destined to marry and have your 2.5 kids and your dog and your white picket fence. How dare you be anything but a God-fearing Christian, and white. How dare you not immediately bow down to authority when it rears its hideous head and demands subservience. How dare you want your president to not beg for adulation at his inane rallies, or to not go golfing every chance he's got because he thinks the nation is a fucking business and deals are made on the golf course, or some such bullshit. How dare you be a woman and expect to be treated equally. Or black, or brown, or a Muslim, or anything but a tow-the-line white cisgendered heteronormative male... If I wasn't an atheist, and if I wasn't a bleeding heart liberal, I'd fit right in. I should apologize for that. Sorry. Like you were born as you were, I was born this way. Unlike so many other white cisgendered heteronormative males, though, I don't assume that I'm deserving of privilege because of it. I have privilege because of it, but I actively wish that others had power, that we tried something different in the Western world for a change. White men are so damned fragile, threatened by anyone different daring to have an opinion, let alone anyone different running for office.

And, I watch movies. I play games. I teach other people to speak up, or I hope I do. I lose my own voice to the noise. On purpose mostly. Like I can't change the world on my own. I can't fix this country, or even the problems in my own life. My occasional loneliness. My anxiety. But, I can do this. I can watch things and talk about them, and maybe offer something insightful some of the time.

Or maybe just something distracting. For you. For me.