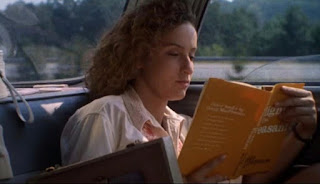 And movies. And romance. Yet Roger says, "This might have been a decent movie if it had allowed itself to be about anything." It is very much about something. From Johnny's angle, it is damn the consequences, go after what you want, dance your dance (like Scott Hastings all those decades (or five years) later will do at the Pan Pacifics), and get the girl. That's simple. That's familiar. But, from Baby's angle, there's more going on. If you've got privilege, use it to make other people's lives better, but don't treat them like lesser people who owe you something, just do what's right, make things better, and keep on doing the same every time because it's right, not because it makes you a better person. The adults around Baby—her father and Max Kellerman (and his wife, who I can't even remember if her character has a name), for example—look at Johnny and the rest of the "entertainment staff" like they're nobodies. Baby does better than that. And, if we saw this as kids—I saw it when I was 11–I hope we do better as well.
Posted by robert e g black at 9:22 PM