- July 05, 2020
Funny Farm is not even on tonight and I've got a little more to say about that film. Because, it feels recently as I get to the movies in the later 80s, I end up wanting to fix them (like Bloodsport) or defending them inordinately (like Willow). And, Funny Farm is just too easy to pick apart. So many scenes just happen for no reason, no connection to other scenes, just to get to a punchline. Characters decide they like the small tow n just because. I mean, imagine that Elizabeth's book inspires Andy to rewrite his and make it better, or reading her fictional version of him inspires him to fix his life, befriend the locals, and figure out how to actually live in Redbud instead of whatever permanent vacation he thinks he's on... 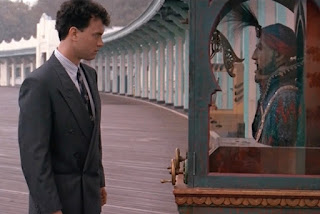 Plus, Josh's apartment is an awesome space. And, it just reminded me of Three Men and a Baby.. Because of that great entryway, I guess. And I realize I should h ave included that movie on the 1987 portion of my list, but oh well. This deconstruction is winding down soon. Can't be adding movies now.
1980s 1988 big blog childhood comedy daily deconstruction every day film films funny farm groundhog day project movie movies sarah