you remind me of an old friend

I am breaking with the rules today. Instead of a fixture of my childhood as the movies have been for the last "year" of the blog. When I was figuring out where to stop the childhood deconstruction process, drifting out of my actual, you know, childhood, I discovered a few movies I had inadvertently never put on my list


(And there are surely others. Still forgotten.)

and figured out which of the ones still ahead on the list needed to be gotten to. Put the list together, decided on a whim to jump ahead to the end and work backward, and, depending on how this movie turns out today--it has a 5.5 on IMDb--(un)fortunately, I asked Sarah for suggestions for 80s movies I might've missed. Not that my deconstruction was entirely about the 80s; I mean I began with 1968's Blackbeard's Ghost and worked forward from there


(mostly in release order, but mistakes were made)

Today's film I have maybe only seen start to finish the one time. Probably saw parts of it on cable, and maybe we rented it once. I can't remember. I don't even know the plot. But, Sarah didn't see as many movies as I did in the 80s, certainly didn't see all the action movies I did, but one that she did see is this one, and it left an impact.


(That being said, Sarah is in the kitchen right now, not in here watching the movie with me. That may have been the smart move.)

The movie is Action Jackson, and it took them 10 minutes to get to the titular character, which is a strange way to go. 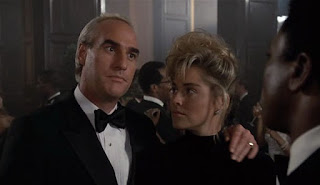 Oh no. Bill Duke is the police captain. You don't want to put Mandy into my head when I'm already dreading the potential horribleness of this film. I shall try to think of Predator instead.

Which I guess Peter Dellaplane (who might be our villain) is; a predator, I mean. Action Jackson just called him a sexual sadist, and apparently Action Jackson almost tore the guy's arm off when arresting him at some point, which cost Action Jackson his lieutenant stripes.

And, Peter Dellaplane is played by Coach? INSERT: me laughing because Coach Hayden Fox doesn't feel like the guy to play a sexual sadist.

Sharon Stone, on the other hand, showing up here after I've seen her in two Allan Quartermain films and Police Academy 4, but before Above the Law, Total Recall, and especially before Basic Instinct, could play a sexual sadist

And, now I've distracted myself from whatever the plot is trying to be. Some guys snuck into some dude's office in the cold open, hid like they were in a horror film instead of a cop movie that feels like someone saw Dirty Harry and Beverly Hills Cop


(Beverly Hills Cop is one movie, for example, that should have made my list but did not make the cut for the end of the deconstruction.)

a few too many times and then saw Apollo go down in Rocky IV and figured Carl Weathers needed a job and there's something going on involving cars, and the police station and the whatever-the-convention-event-was-earlier are both full of smoke like this is a film made in the 70s, and this movie is trying really hard to take itself seriously.

Now someone (played by Robert Davi, so I feel like I would have noticed if he was in the first 20 minutes; he wasn't) is threatening to kill himself and Action Jackson is doing a very poor job of talking him down... And that scene ended abruptly. CUT TO: someone singing, and I feel like I should remember who this is. I was going to guess Vanity, but I wasn't sure, so I looked it up. It's Vanity. And, Coach Sadist is her benefactor I guess, but we cut back to Jake Fratelli and Apollo Creed talking about the murders, and I feel like the murders are a side plot, except the film doesn't have a central plot. Also, for spending so long on the purse thief before we even met Action Jackson, that dude seems to matter not a whit now.

And, a guy dressed as an APS driver shows up and kills Maniac Cop, and we don't need that kind of imagery right now when we're in lockdown and UPS showing up is a special occasion. But nevermind that scene, Coach Sadist Fox has a needle, and drugs Vanity into unconsciousness. That makes him more of a pervert than a sadist, I would think, but do we need to nitpick Action Jackson?

Oh, who am I kidding? Of course we have to nitpick this thing. Like, Action Jackson will openly come at Coach Pervert in a restaurant (confronting him about his plans for the AWA) but hesitates to continue when the president of the AWA happens to be the other guy at the table? What the hell? Come at him stronger, Action Man. You don't have a gun. All you've got is making a scene in public.

He's got a nickname and a reputation. Action Johnson should be pushing boundaries all over the place. I mean, who thought making a movie about Dirty Harry when he tries to behave himself was a good idea?

In reality, yeah, cops need to calm the fuck down and behave. But, this is still the 80s. Action Creed here should not be spending so much of his time having conversations with suspects or their wives or their mistresses.

Also, I must make a correction. Looking at quotes from the movie, because I need a title for today, I realize that Apollo Jackson called Coach Fox a sexual psychopath, not a sexual sadist. Got Coach Fox confused with John Lynch in Killing American Style., I suppose. Because, I guess all these movies blend together a little too much sometimes. Bill Duke might as well be Cameron Mitchell or some other one-note police captain from the 80s...

It's like this movie wants to be a little deconstructionist itself. Take the tropes of cop movies and cut past them, but the director has only made episode of The A-Team and the writer hasn't really done shit. So, they do not know how to make the post-modern cop film that I think they are trying to make.

But, mostly it's just tedious.
Posted by robert e g black at 8:59 PM