There is a detail I love in Josh's carnival ride tragedy: though he is distraught at being too short to ride, Cynthia, the girl he has a crush on (who is there with another boy... who drives), immediately says the height rule is stupid. She stand s up for Josh even as he is already too stuck in his own short - person head to notice. He Charlie Brown walks through the carnival and finds himself in front of that fateful Zoltar machine. And our setup is complete. 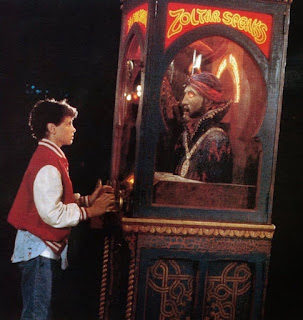 He is a kid with chores, and a crush on a girl, and when he dares something scary --


and I went on a ride like the loop one he tries at a carnival once, and it was pretty frightening

-- and gets close to that crush in line, everything falls apart. Hi s whole world comes apart, really. And, then gets twisted by magic into something else entirely. And, at the other end of the film, the trick is that it is not rejection that pushes him to change back, but something like the opposite. Billy brings him the location of the Zoltar machine, and Josh has been an adult for so long that at first he keeps on with his new, adult life. The adult world has turned him gradually into someone he is not, or certainly shouldn't be yet.

But, the point of the movie, I suppose, is that it's the childish energy, the reliance on hands - on, lived experience over facts and figures, that makes Josh genuine, no matter his age. He begins the film playing a computer game involving a wizard, and a bunch of slain ice dwarfs. He opts to melt the wizard but hesitates (partly because his mother is calling him) and he is killed. The fantasy doesn't work out. At the end of the movie, he plays the game again. No external distractions. He types throw thermal pod and we do not see what happens. The movie moves on to him visiting his "old" neighborhood and then choosing finally to tell Susan that he is really a kid. He can not only solve the magical problem, he can move on from it.

But, also he will never move on from it. These six (-ish) weeks of his life included his first job, first reciprocated love, first kiss, first sex, first coffee... things he will never forget. And, for these six weeks his opinions mattered and affected change in the world around him. But, just getting to suddenly be in that position is a transition he is not ready for. Instead, he needs the gradual process, the growing up, having to get through school, deal with being short, deal with being awkward (but not manic pixie dream guy awkward where Susan has her own age - based crisis because of his influence). She gives Paul back the stuff he's left at her place and she aims to be a better person, not conniving like Paul. She goes to the carnival with Josh --

-- and he not only is not looking for the Zoltar machine anymore, he does not notice at all that this carnival has one. He is on a date and this night, the night of his 13th birthday, he becomes an adult as it were. Drinks coffee. Takes down the do not enter sign from his office door, goes to a dinner party. And, then the movie smartly takes us out of the city and cuts back and forth between Josh's adult life and Billy at home, including a great interaction between Billy and Josh's mother that offers us a reminder that Josh is still just a kid on the inside no matter how much he has changed (and as Josh himself has just realized as well).

Ultimately, Josh has to take the long way around to get to adulthood, because that is also the point. You need those moments in between for the later bits to matter. You c an' trust jump into adult responsibility and an adult relationship. Like Josh, your brain won't be ready for that just yet.

Except this movie is not strictly for kids, so the message works in different ways. It isn't just growing up, it's every change. Change is hard. Abrupt change is harder. Still, sometimes it is worth it.
Posted by robert e g black at 8:53 PM