I will admit I had no plan for today’s entry. I’d been meaning to do what I am about to do at some nice round number—I had considered Day 60, but then I can stuck on something else that day. Then, I thought, why should it be on a round number? Round numbers are arbitrarily significant, anyway, so what does it matter?

So, below, you will see the very special Day 62 recap of what’s been going on so far in the Groundhog Day Project. I mentioned this blog in my graduate seminar tonight, so if any of those folks happen to be clicking in for the first time… well, I’m sorry. There will probably not be much original insight today. I would recommend, offhand, Day 52 if you want something interesting and personal, or Day 39, Day 40 and Day 41 for a nice philosophical trio. Otherwise, browse below…

And, sorry, I still haven’t gotten to an entire entry dedicated to Ned. 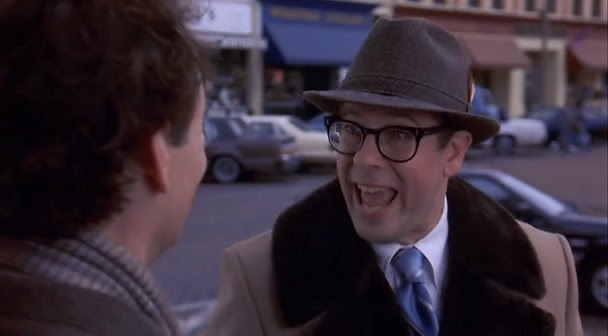 Day 1: on me in 3… 2… 1… was a simple enough beginning, a basic review of the movie and an introduction to the project.

Day 2: prima donnas still seems pretty basic, nothing to be too scared about.

Day 3: it’s like i said, i love this film gets something out of the way early on, the counting of onscreen days.

Day 4: the wretch, concentred all in self takes Rita’s view of Phil as egocentric and explores Phil’s personality on a very basic level.

Day 5: for the rest of your life is a very basic overview of the meaning of Groundhog Day, something I’ve been expanding on ever since.

Day 6: groundhog day used to mean something in this town gets the obligatory explanation of the holiday out of the way.

Day 7: it’s funny you should mention your health is the first reference to obituaries in this blog, and it favors real life over an online existence.

Day 8: i’m just trying to give you your money’s worth deals with Phil’s role as weatherman.

Day 9: i got you babe explores just that, the Sonny and Cher song that wakes Phil each day.

Day 10: he likes the town, he paints toy soldiers, and he’s gay is probably my first deliberate attempt to tackle a serious topic in relation to Groundhog Day, this one the representation of gender roles.

Day 11: look in the mirror and see what you look like is mostly just notes on Harold Ramis’ commentary track.

Day 12: i really really liked him a lot tackles something I should probably tackle again in more detail, Phil’s experience with being dead.

Day 13: i want to stay an extra second in punxsutawney? is a meandering way of blaming a shovel.

Day 14: i don’t think so, but i could check with the kitchen is the first of the déjà vu trilogy, continuing through Day 15: didn’t you just ask me that? and concluding with Day 16: that’s an unusual problem, mr. connors.

Day 17: one of these big blue things proves I am capable of focusing on very absurd details, in this case the prevalence of the color blue within the film.

Day 18: i told you, i know everything is what happens when I focus on the film again separately from writing the blog—I have a tendency to get to work on the blog during the film, but this particular day I watched it on my iPad while at the laundromat.

Day 19: la fille que j'aimera sera comme bon vin explores not only the French song Phil quotes to Rita but my argument that Phil did not learn French.

Day 20: when checkhov saw the long winter… deals with Chekhov as a mark of sophistication in Phil Connors and still deserves a sequel.

Day 21: this is gonna seem sudden, but… nancy, will you be my wife? deals with Groundhog Day as romantic comedy but also marks the introduction of the work of Claire S. Bacha into the project—she would often be cited again and denounced.

Day 22: this is real. this is love counters the previous entry in establishing Phil’s understanding of love, and this might be the first reference to the Dalai Lama in this blog as well.

Day 23: i’ve killed myself so many times, i don’t even exist anymore is the second big obituary piece, particularly focused on the idea of suicide.

Day 24: fred, how was the wedding? returns to the topic of love and romance to focus on marriage in particular and representations of weddings within the film specifically.

Day 25: it’s like yesterday never happened is my recap of the first “time loop day” in which I watched seven TV shows’ time loop episodes.

Day 26: strike up the music is my review of the soundtrack to Groundhog Day, track by track.

Day 27: are you making some kind of list or something? is my first exploration of Phil’s A/B testing approach to dating.

Day 29: what did you do today? offers the Oscar-winning short film Tango as a representation of how complicated Phil’s day must be by the end of his loops.

Day 30: there’s a lot of things wrong with… is my response, with screencaps as support where necessary, to the IMDb goofs page for Groundhog Day.

Day 31: i never said midnight establishes a month in the explicit rules for the project.

Day 32: would you be at all interested in seeing the inside of the van? explores the possibility of Larry and Nancy getting together.

Day 34: you’re not a god. you can take my word for it explores moral relativism.

Day 35: sometimes i wish i had a thousand lifetimes deals with our need for companionship and involves the final episode of Futurama.

Day 36: i’ve already done it… twice begins my notes on Harold Ramis’ revision of Danny Rubin’s screenplay, which continues in Day 37: watch out for that first step and concludes in Day 38: sounds like a lot of fun.

Day 39: if you could be anywhere…, Day 40: …where would you like to be? and Day 41: probably right here marks the big philosophical centerpiece of The Groundhog Day Project so far, involving Nietzsche’s eternal recurrence, Siddhartha, the Tao Te Ching and Ralph Waldo Emerson.

Day 42: you can freeze to death is the third obituary-related piece in the project, but it is also my review of Richard Lupoff’s short story “12:01 P.M.”

Day 43: whatever we want is a collection of tangential thoughts and explorations, the kind of thing that happens sometimes when you watch the same movie every day.

Day 44: pick out your partner and join in the fun involves a lot of gifs and videos and bad dancing… and in the case of Debbie Kleiser, awesome dancing.

Day 45: this is wonderful deals with two things, the girl with the upside down Phil sign who loses her friend and Rita’s lies… and it coins the concept of Phil Connoring someone.

Day 46: he saw a winter bleak and dark and bereft of hope is not the long promised, more in-depth entry about Chekhov but rather a review of the film The Butterfly Effect.

Day 47: we can see each other tomorrow involves a discussion of “now” and “if it feels good, do it.”

Day 48: gosh, you’re an upbeat lady is not my first mention of Michael Faust or Claire S. Bacha, but I think it’s the first time I deal with Suzanne M. Daughton and the concept of Phil connecting with “the other.”

Day 49: it’s groundhog time begins my notes on Danny Rubin’s original screenplay, and the harping on his use of voiceover in particular continues in Day 50: see, i knew you would say that and my critique of Rubin’s original concludes in Day 51: i feel really weird.

Day 52: if you only had one day to live is probably my personal favorite among the entries so far, tying together the philosophical and the personal while citing an awesome YouTube video and even quoting The Holy Bible.

Day 53: the same thing your whole life, among other things, ponders Phil’s future beyond February 2nd.

Day 54: another reason why today is especially exciting recounts the second “time loop day” in which I watch another seven TV shows’ time loop episodes.

Day 55: something is different contemplates Groundhog Day as a television series.

Day 56: keep your fingers crossed is my first (and certainly not the last) look at Groundhog Day as a religious film.

Day 57: mix together at high altitudes begins my look at Danny Rubin’s notes from before he wrote his first draft of the screenplay, which continues in Day 58: probably (will) be some accumulation.

Day 59: maybe he’s not omnipotent deals with some little things that weren’t big enough for their own entries… but not this guy with the awesome mustache (on the right with a bit of a dumbfounded look): 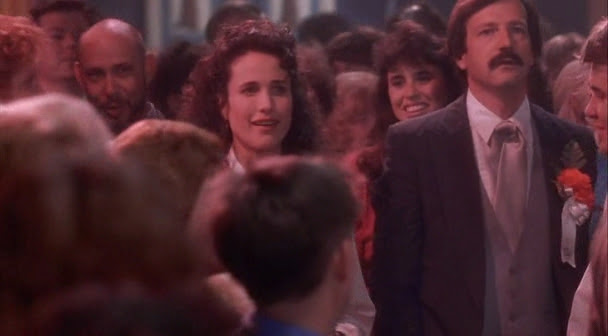 Day 60: that’s not true introduces the town of Woodstock, IL, where Groundhog Day was filmed, but mostly just to point out how one woman who lives there lied… not my nicest entry.

Day 61: sorry, bronco ended the second month of this blog with my attempt to understand Danny Rubin’s insistence on using voiceover in his original script.

Oh, and there’s Day 62: for your information which lists all the entries so far for those of you new to the project.

By the way, The Groundhog Day Project has a Twitter and a Facebook page. Follow and like them respectively and help spread the word. And, if you want to support the Groundhog Day Project financially (so I can get a better screen and a blu-ray player maybe to see this movie a little clearer and notice new things, or travel to Woodstock, IL or Punxsutawney, PA, for example), you can do that too...

Today’s reason to repeat a day forever: to make an infinite list of entries that loops around to its beginning, ouroboros-style.