you could always use a little more

So, anyway, meaning shows up where we find it. And, that meaning may just be that Phil has found God in the time loop.

It isn't like Michael P. Foley is the only one that thinks so. Rick Wade, author of "Will Winter Ever End? Groundhog Day and Modern Thought - A Christian View of American Modernism" would seem to agree, for example. He even cites Foley. But Wade's primary point is not necessarily to express a Christian take on the film, but rather comment on the modernist elements of Phil Connors (pre time loop especially) from a perspective that happens to be Christian. His way of doing things doesn't get my confirmation bias ire up as much as Foley's does.

Wade specifically critiques what he calls "a major philosophical shift in modern times, namely, the abandonment of a teleological view of the world." In lay terms, that last bit means we (the increasingly larger secular crowd) have abandoned the notion that there is inherent purpose to our existence. As Wade explains--and pretty close to what've suggested in this blog before and elsewhere--

We are taught that the universe is an accident of nature, and hence we are too. We weren't put here for a purpose; there is no goal to life beyond what we choose. any meaning we have in life is meaning we supply ourselves.

And, here is where my version of this differs from Wade's...

When this idea really sinks in, the ramifications are truly alarming. We want to have purpose; people with no sense of purpose have nothing to move toward. This idea was the root of the despair of the existential philosophy. It drove thinkers such as Jean Paul Sartre to teach that the burden is on us to form our own lives, that to not do so is to live inauthentic lives. Although the existentialists tried to transcend this sense of meaninglessness, they weren't successful. The sense of loss that comes with thinking we have no purpose reflects what we know deep down because of being made in God's image: we were made by Someone for some purpose. To not have purpose necessarily diminishes our lives.

Sure, it might be scary to face a reality in which there is no reason for you to exist... though I think that phrasing is actually misrepresentative of the situation just a little bit. Allow me to explain; there is a very good reason that you are here--your parents got together and had sex and you haven't managed to die just yet. It's not a particularly meaningful reason, more of an objective explanation, but so what? Why must we be given purpose from others? What's so great about a purpose we don't control? As much as we strive constantly to control the world around us, you'd think we would appreciate that idea of being in control not only of our own destiny, so to speak, but also in deciding what it means to have that destiny.

I don't know enough about existential philosophers, I must admit, to comment on whether or not they were successful in transcending this sense of meaninglessness. However, I for one do not find life to be meaningless, so I suppose that counts in favor of their side. And plenty of atheists besides me also find life to be meaningful. But it is not Wade's notions about meaninglessness that bother me, even if I think he may be wrong. Rather, it is his suggestion that we have a "sense of loss" a) because we think we have no purpose and b) as a reflection of "what we know deep down because of being made in God's image: we were made by Someone for some purpose."

I will break this down as systematically as I can. Presumption number one in that statement of Wade's: that we have a "sense of loss" simply because he has imagined we must. Even assuming that we are wrong, even assuming we have an actual loss, that does not mean we must have a sense of it. Presumption number two: that we think we have no purpose. That isn't even the existentialist perspective as Wade describes it; he says outright that, instead of some inherent meaning, "[a]ny meaning we have in life is meaning we supply ourselves." And, he cites Jean Paul Sartre's notion that "the burden is on us to form our own lives." Neither of these things precludes the possibility of us finding or creating meaning in our lives without being handed one by a religious doctrine. To assume that having to find meaning somehow means that we can't find it makes no logical sense. In fact, I would suggest that rhetorically, the concept of searching for meaning implies the opposite: that meaning is findable. Presumption number three: Wade, being Christian, operates under the assumption that God created us, sure, but putting his feeling of reflection here, a) for a situation he is not experiencing himself, not apparently has he and b) for a situation I just explained doesn't even necessarily exist also does not follow logically. He's coming to a conclusion that doesn't follow the "facts" he gives because it serves his purposes.

And, before you say it, but perhaps after you've had time to think it, yes, I also make the argument that serves my purpose. And, I didn't actually mean to spend this much time on Wade's religious presumptions; I rather like what he has to say about some of the emptiness of modern life. For example, he points out how Phil, upon facing the troubling nature of the time loop, looks first to Rita, his producer (and one of the only people in Punxsutawney he'd probably want to talk), then he turns to science (a medical doctor then a psychiatrist) to fix what is quickly becoming an existential crisis. And, Wade points out, "[t]he highways are closed... [l]ong distance lines are down... This modern man cannot be rescued by modern means." And, Phil is a "modern" man. He lives a shallow, urban life. He makes his living on television. And, he has little interest in connecting with anyone on a meaningful level.

So, what does this modern man do when modern means cannot save him? Well, first, he drinks. Then, he he goes on what Wade calls a "hedonistic binge." He further explains the modern culture Phil embodies:

As a society we have lost any sense of going somewhere. In the West, we've been taught to live for the moment, to savor the experiences of today. Yesterday is gone, and there is no ultimate tomorrow before us which will draw together the pieces of our lives into a meaningful conclusion... What is left to do but enjoy ourselves as much as we can while here?

Well, I would respond, a great deal. Wade's presumption here is that without having the meaning he wants us to have, we cannot value anything but the hedonistic binge. But, that simply is not the case. It is a false dichotomy to suggest that we either accept the purpose God gives us or be entirely selfish. It's patently offensive, in fact, to suggest that we cannot value anyone beyond ourselves simply because we don't have your God. We can still maintain relationships with people, with family and friends. We can still value our jobs or our education. We can still hope for and work toward improvement in the world. So, what is left to do but enjoy ourselves as much as we can while here? We could, perhaps, live and work so that other people beyond ourselves can have the chance to enjoy their lives. We could raise children and promote their lives above our own. We could work to help poverty- or disease-stricken people around the world to make this a better place when we leave it than it was when we came into it. We could learn all we can so that we can then teach it to other people to further mutual understanding of the world and our place in it. And, we could still take some time to enjoy life ourselves. As Wade himself says later, "there is nothing wrong with enjoying the experiences life offers." He adds parenthetically, "given the limits of biblical morality and wisdom, of course." He suggests that our "national moral consensus" in America "goes little further than don't hurt other people unnecessarily" as if that is a bad thing. That right there would be plenty if we would all simply follow it. The problem is not the dearth of rules but the following thereof.

Phil Connors, at his worst, tricks a woman into bed (or, literally, couch, but why nitpick?) and steals a bag of money. Interestingly, the predicament of the time loop literally removes consequence from these actions, but let us assume that Phil is being weighed by all of his actions, regardless of the flow of time. Some religions might weigh only his negative actions and condemn him, but as I understand it, having grown up with weekly trips to church, Phil's positive actions would also be weighed. I was never Catholic, so I supposed I cannot speak to the specific value of, say, Phil's committing suicide more than once. But, I can look to his attempts to save O'Reilly, his saving of the kid in the tree, his saving Buster, his helping of the old ladies, of Felix, of Debbie and Fred, and his own internal quest to better himself, and I imagine not the Christian God judging Phil but rather the Egyptian scales (because it's a nice visual), Phil's heart weighed against a feather... 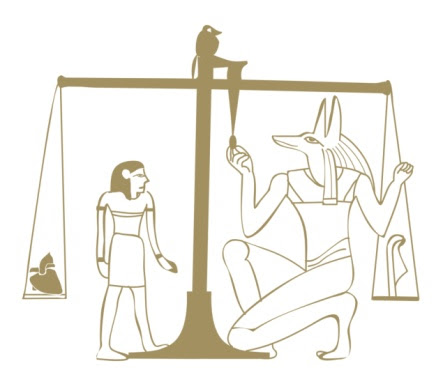 Theft may be a sin, and Phil's fornication with Nancy, if not his trickery, might qualify as well. But, his heart would also include the good deeds. And, within the context of the film, it is implicit that he has committed these acts more than once because they are his "errands" and he does them quite systematically, whereas his "bad deeds" are not actually implied to have been repeated. So, how heavy is his heart at the end of the time loop, or rather at the end of his life having experienced this loop and learned so much from it?

Ultimately, Wade concludes his piece in much the same way I might:

That last bit seems a bit shallow, perhaps, but the idea that we are "better people" for having lived a good life--that implies to me that Wade would agree with me in saying that Phil's heart is no longer so heavy as to outweigh that feather. So, Phil found his purpose through trial and error and it worked out. No God necessary.

Even if you insist on seeing one.

Today's reason to repeat a day forever: to find some people to debate this kind of stuff with in person, just in case the internet makes me seem more blunt or rude than I mean to be.