when you stand in the snow...

(And, no I did not intend a pun there with the harp bit.)

Anyway, first angel: there's an angel statue in the front lawn of the bed and breakfast. I think Michael Foley would see that as evidence that Phil has a guardian angel watching over him from the start of the time loop all the way to February 3rd. I hope it's a fox...

(And, that will perhaps be the most dated reference in this whole blog when historians study it in the future. [Seriously, reading this entry again nearly two years later, it took me a moment to figure it out.])

And, that angel is visible again right before Rita goes into the bed and breakfast on date night. And, again at the end of the film. 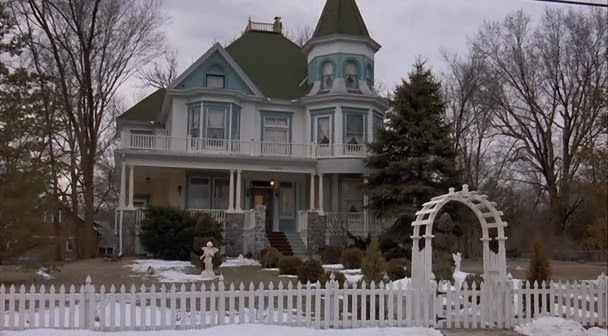 Second angel: well, in dialogue, Phil tells Rita on "god" day that "when you stand in the snow, you look like an angel." And, weirdly, I think that's the line that convinces her he knows what he's talking about. Like, she's seen herself in the snow before and she totally agrees. All that stuff about boats and not the ocean and the boathouse with the missing boards--he could have learned that anywhere. And, really, I think that's all the angels...

But, more fuel for the religious nuts: the number 3.

What number is on the camera behind Phil during his reports at Gobbler's Knob? A big red 3.

How many people in the van? 3.

How many old ladies in the car with the flat tire? 3.

How many vehicles chase Phil when he kidnaps the groundhog? 3.

And, what station does Phil work for? Channel 9. 3x3

How many women does Phil date during the film? 3.

How many angels are in the film? 3.

How many suicides do we see? 3.

How many times does Rita order Sweet Vermouth? 3.

How many guys head for the stage before Doris volunteers Phil for the auction? 3.

By street, you can leave the Cherry Street Inn by how many directions? 3.

Phil wakes every morning at 6, divisible by 3.

How many people are in this room as I type this entry? 3.

But, I guess those last two don't count.

Still, the trinity is all over this film. So, I'm convinced...

Phil Connors died for us.

Today's reason to repeat a day forever: to figure out the specific links between Groundhog Day and, say, Hinduism, or, better yet, given the Pennsylvania setting, the Amish. Not, that I could ever get them to watch the movie with me and discuss that sort of thing.