don't drive on the railroad tracks

There will be very few words in today’s entry. And yet, this entry took over 4 hours of work. I have, previously used Google Maps to identify a few locations in Groundhog Day. Today, I took that further, identifying a whole lot of exterior locations from the film, to a) be more thorough than before and b) prepare for my trip to Woodstock a week from today. They’ve got a walking tour of filming sites on both Saturday (the 1st) and Sunday (the 2nd) but I want to know more locations than they will probably show.

(I will admit that I got a little help from Chas Demster’s Filming Locations of Chicago and Los Angeles blog. But, I did not get help from Julie Boggie, who might have photographed the right tree from which Zacchaeus fell but she got the photo from a bad angle to be sure. And, she did not show where the previous shot with Phil checking his watch then running was filmed. I think it was up the street (she puts the tree—and she went on the walking tour—on Madison between Mary’s house and the Cherry Street Inn), so the busy street in the background would be W South St aka US 14 Business Route, but Google’s street view photos seem to have been shot when the trees were a lot more green so it’s hard to tell.)

(Final note: I think I just proved Boggie correct in the tree’s location as I was about to post this entry. But, Phil checking his watch definitely has to be farther up the block. I should get some screenshots.)

Anyway, following are four images. First the larger map of Woodstock with notable locations outside of the town square’s vicinity. Next, a larger view of the downtown area. 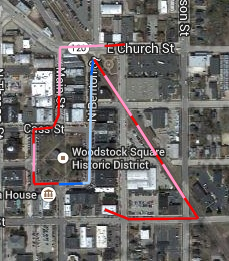 And finally, the second car chase, at least until they leave Woodstock. The straight highway where we get bits of dialogue from Rita and Larry and Phil talking to the groundhog—I have no idea where that is. And the quarry is actually like 31 miles west of Woodstock in Loves Park. Also, note, at one point this chase makes a leap that doesn’t work in the real world of Woodstock, heading northwest on Washington St (marked as 120 on this image) then suddenly turning off Lake St onto E South St to head southeast only to, as I already said, end up west of town to reach the Nimtz Quarry. Today’s reason to repeat a day forever: to do this sort of thing to every movie’s filming locations.