In my recent paper "From Charioteer Myth to Shoulder Angel: A Look at our Divided Soul" (2013) I detailed the connection between Plato's charioteer myth from Phaedrus and the modern phenomenon of the shoulder angel and shoulder devil--you know the thing: 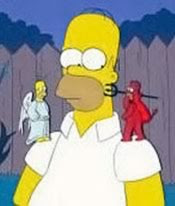 While I mentioned the early 90s television series Herman's Head, the ensemble cast of which included Ken Hudson Campbell, a.k.a. Man in Hallway, a.k.a. Chubby Man, in the paper, it was the one of my three papers I wrote in the fall that didn't include Groundhog Day. Today, while reading the rest of Benesh's (2011) dissertation, one of the notions I scribbled down--this one not related to anything in Benesh's piece--was about Phil's shoulder devil and shoulder angel... or rather his lack of the same.

This is what I wrote down--along the right edge of my copy of the tournament schedule if you must know:

Phil has no shoulder devil, only a shoulder angel. Why? Because the film is about dealing with internal conflict. Phil necessarily has to contain his own demons (though to a small extent, Gus (and Ralph) could be said to occupy this spot). Nancy is a temptation but not a temptress. Phil's own need to be masculine and sexual--phallic-narcissism--

I must interrupt this quotation to point out an inaccuracy above. I said this notion was not related to anything in Benesh's piece, but the concept of phallic-narcissism was mentioned in Benesh. The rest, I'm pretty sure, doesn't link to Benesh. I imagine a lot of entries related to Benesh in the near future now that I've read the entirety of her dissertation. But anyway, back to the short thing I wrote today:

--is what must be overcome. There is no Satan in this wilderness, just Phil, alone.

Additionally, most of what make Rita his shoulder angel is either implicit or stated by Phil. What could be taken as a fault in the filmic structure--telling us rather than showing us who Rita is--is perhaps necessary in order to put the angelic urge on Phil as much as the devilish urge. So, maybe Phil really has neither the shoulder angel nor the shoulder devil. He is merely human, just like the rest of us.

However, one could argue the alternative--that Rita is Phil's shoulder angel and Gus is Phil's shoulder devil. But, there's a flaw in that Gus would not grant Phil the "no consequences" direction for events that follow were he not specifically prompted by Phil. So, in a way, Phil then becomes the first cause to his own hedonistic tendencies. Which really means, as I've already said, Phil has no shoulder devil. Or, in Platonic terms, he has no dark horse. He is his own dark horse.