we've got work to do

I’ve been avoiding reading Julie Ellen Benesh’s dissertation, “Becoming Punxstuawney Phil: Symbols and Metaphors of Transformation in Groundhog Day,” because if I’m going to use this project and all the research involved to build my own thesis next year I didn’t want her influencing the direction(s) I might take things. But, I’ve decided to start sampling it if not to actually just read it straight through. Sure, Benesh may influence what I do, but she could also a) give me specific things to respond to b) demonstrate things I should avoid, 1) not just because it’s been done but 2) but also because, like with so many of the other pieces I have read for this blog, I may just disagree with her conclusions or her theories.

For example, just glancing at the section on the use of Lines and Spheres in the film, I’ve found some things I find questionable. And this may be funny coming from me. First, I don’t know the original location for this quotation from Hemingway, but it’s worth bringing up:

There isn’t any symbolism. The sea is the sea. The old man is the old man. The boy is a boy and the fish is a fish. The sharks are sharks, no better, no worse. All the symbolism people say is shit. What goes beyond is what you see beyond when you know.

On the one hand, I think Hemingway is blatantly lying here. If nothing else, the old man carrying the mast of his ship near the end of the novel makes for a strong Christ-Figure implication (not sure how the character will score on the Kozlovic scale). On the other hand, looking for symbolism in commonplace objects might be pushing it sometimes.

Benesh, for example, follows Gilbey’s (2004) lead in linking the striped wallpaper in the Cherry Street Inn with the jail cell bars in Groundhog Day. My problem with that link is that that striped wallpaper is not in the obvious place if you want symbolism—Phil’s bedroom—but in one little section of the dining room. And, linking those same stripes/lines to Phil’s striped shirt he wears a few times throughout the movie is a weak link to make as well a) because having a striped dress shirt is commonplace enough you need to have an explicit reason (Phil wearing nothing but striped shirts, maybe) to assume it means anything and b) because without some specific analysis as to on which particular days Phil wears the striped shirt (Benesh merely refers to “the striped clothing most often worn by Phil Connors”), the figurative meaning is lost. On that latter note, for example, Phil is wearing the striped shirt on the last day of the loop and the morning after, when he is now free from his imprisonment. Referencing Gilbey—

(Though I only remember him citing the wallpaper, in fact (upon checking), Gilbey specifically suggests the framing of Phil within the video monitor at the news station and in Larry’s camera are also “visual allusions to incarceration” (p. 49). This makes me wonder why the newsman being on camera would be somehow symbolic of something when it is entirely inherent and vital to his very existence.)

—Benesh also cites the blinds at the Tip Top Cafe and at the neurologist’s office as well as the picket fence in connection with the jail cell bars (p. 82). Considering the differing tones of the various Tip Top scenes, any symbolic suggestion about the blinds seems simplistic. And, the neurologist’s blinds were practical, because it was a cover set with only two walls and the blinds were a way to suggest the outdoors beyond the window without showing it. Sometimes blinds are just blinds.

...then again, even Harold Ramis somewhat mocks in his commentary the “subtlety of having clocks on the wall” next to Phil at the Tip Top. So, maybe clocks aren’t always just clocks.

Still, Benesh suggests a contrast with the lines in spheres and circles, yet misses entirely the various donuts and other pastries on Phil’s tableful of food. That last bit was in jest, of course, but, really, why not include that? Benesh does mention that scene of Phil gorging himself in her section about “The Digestive Metaphor.” But here she mentions the spheres of the snowman and the snowballs. “Large white spheres,” Benesh tells us, are “symbolic of the divine child archetype” (p. 82). But, snowmen and snowballs are also perfectly reasonable objects to have in a story set in midwinter. Really, what else fun could Phil and Rita do together on “date night” but go outside and build a snowman? I mean, they could go bowling, I suppose, but then we’d have the same issue of spheres. Benesh also says that Phil and Rita waltz, “circularly, in the round gazebo” (ibid). However, they don’t just dance in circles and the gazebo is actually octagonal. But, then again, I’ve presumably spent more time with this movie at this point than Benesh ever did.

Benesh also tells us how “Mayor Buster, as master of ceremonies at the bachelor auction, stands behind a podium with a circle stating ‘Inner Circle Committee,” evoking, like a secret society, both feminine communalism and masculine authority” (pp. 82-3). First, the movie never suggests that Buster is the mayor. I vaguely recall correcting a different author about this detail a long time ago in this blog, pointing out that Buster is, more likely, President of the Inner Circle Committee (in reality, at least now, the Groundhog Club’s Inner Circle)... actually a Punxsutawney Spirit article from 2012 implies that the banquet is led by the “Fair Weatherman” and the scroll is read by the Vice-President, so Buster would be one of these two (or an amalgam of both). Nowhere in the film is called mayor. And, the Inner Circle is a very public, real thing that’s been around for quite a while (the Punxsutawney Groundhog Club has been around since the 1880s), not some secret society and not invented for the film. The circular logo might have been invented for the film or may have been what the Inner Circle was using at the time—googling anything with “Groundhog Day” and “1993” in it generally leads to the movie and a search on “Punxsutawney Inner Circle logo” brings up more recent photos of a more vertically elliptical logo... like this: 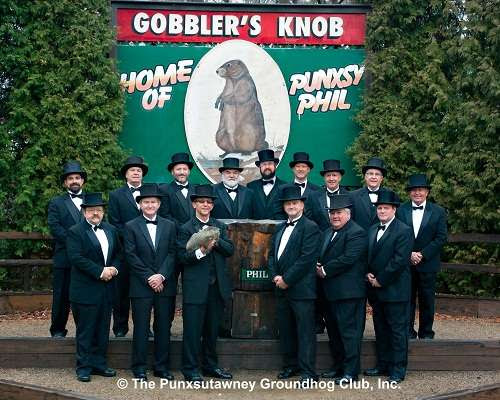 And, I wonder how many logos out of all the logos in the world are circular. What’s common is common. And, this from the guy who did an entire blog entry about the color blue... a topic which Benesh spends a few pages on, in relation to other colors. In particular, Benesh tells us that “blue and white [are] colors associated with Phil Connors’ salvation.” There’s a problem there in that blue and white are omnipresent in the film long before Phil is anywhere near his road to salvation. Then Benesh does the kind of thing I do often with tongue in cheek—and I hope that is obvious at least most of the time I do it—stating that the girl kicked out of Mary’s house (note: this particular mention of blue and white is in describing the exterior of Mary’s house) wears both blue and pink because

She represents Phil Connors’ as yet immature, but learning anima, and the pink, round gum bubble he blows as he takes his first lesson confirms this association. Similarly, Rita wears pink in the diner scenes, contrasting the cerebral and spiritual blue with the corporeal and emotional aspect of life represented in red mixed with white... (p. 79)

That’s enough of that. Personally, I think the bubblegum bit is just there to demonstrate that even in finally working to improve himself Phil is still playful and he will never completely let go of his immaturity completely. Plus, what other shape would a bubble be? Also, that is not his first lesson but at least his second as the film cuts from the exterior of the house as he begins his first lesson to the next morning with Chubby Man in the hallway. Rita wearing pink is an iffy proposition as well because Rita also wears blue, as Benesh also mentions; in fact, she wears her blue coat far more often in the film than she is seen without it. And, she wears a lighter blue shirt under that pink sweater. I do find it interesting how the pink/blue combination connects Rita and Katie (what I call Mary’s student), but interesting does not indicate meaning.

That’s enough picking on Benesh for today. Tomorrow I promise to share something from Benesh that I like (and it’s something I had not noticed in the film).

Today’s reason to repeat a day forever: to nitpick the opinions about Groundhog Day from every single person I can possibly meet in that day.