people just don't understand what is involved in this

This is another "short" entry.

I wanted to share a bit of what goes into this blog. There are the books: 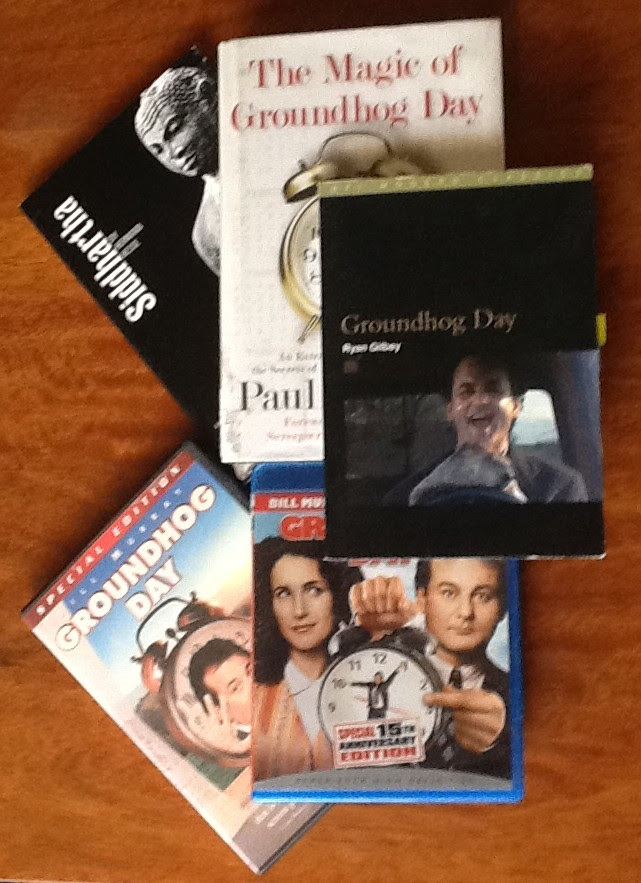 Oh, and the DVD and blu-ray are in that unfortunately blurry photo. I'll get a clearer photo on the next resumption.

And, there's Rubin's book, of which I don't have a physical copy: 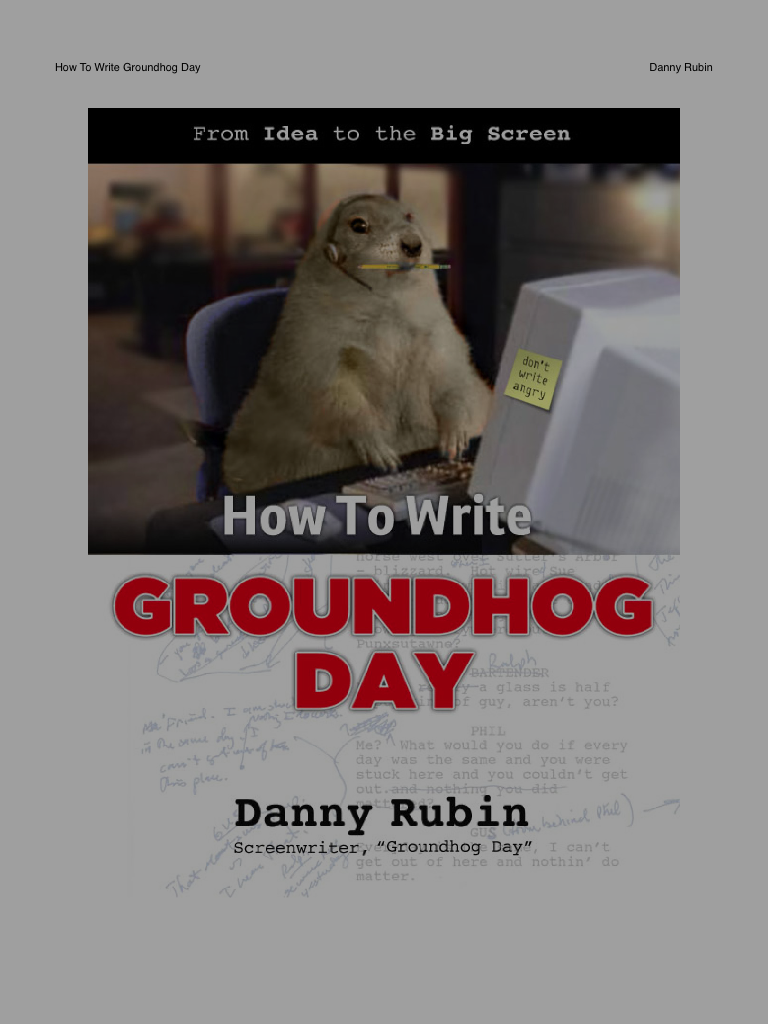 But, a lot of the more in depth stuff comes from a couple binders. The one most visible in this photo (below) is the one with a bunch of journal and periodical articles in it. Also, on the left in this photo are newer arrivals in a manila folder and the handwritten version of "The Ballad of Phil Connors." The 3x5 cards are mostly notes on recent title adjustments. 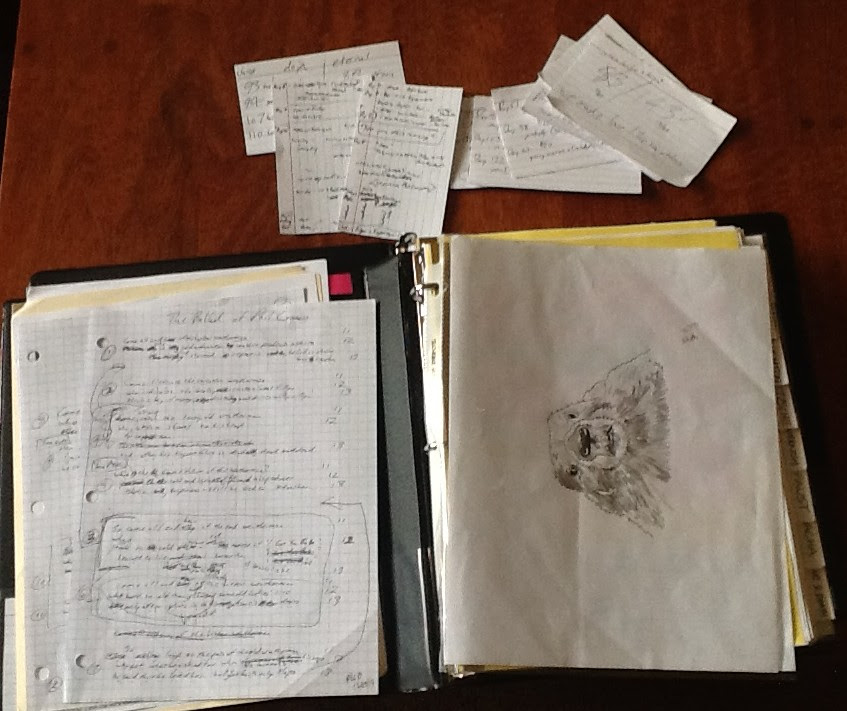 And, this photo should give you an idea of the pieces in that larger binder: 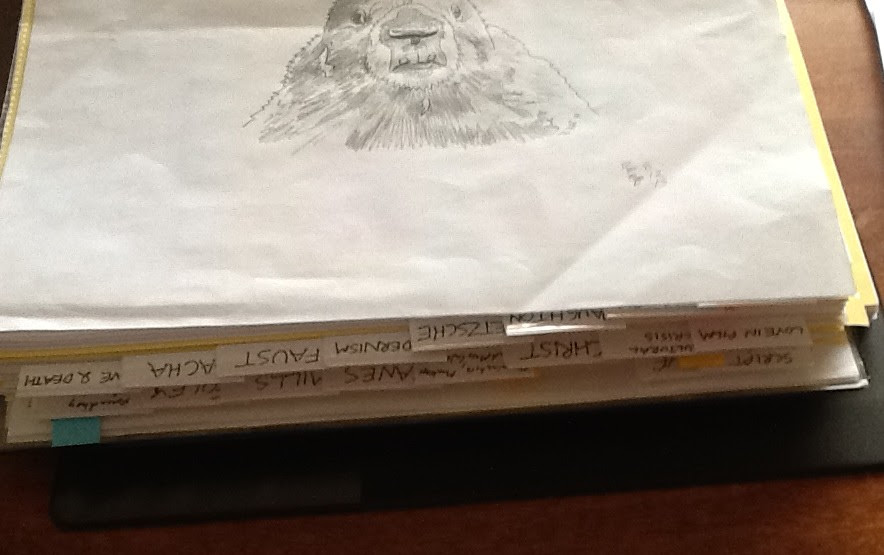 Not pictured too well is the binder under that one which contains a printed copy of Ramis' second revision of the screenplay for Groundhog Day with some handwritten notes. Also in that binder is a copy of Julie Ellen Benesh's doctoral dissertation, Becoming Punxsutawney Phil: Symbols and metaphors of transformation in Groundhog Day (which is a copy I printed myself from an online copy, not the $62 bound version from Amazon).

Not pictured at all is my binder of Christ-Figure articles--there's a lot of research on just that topic, of course, because I wrote my prospectus on the topic of Cinematic Christ-Figures for the end of the fall quarter. For the record, at this point, I think I'm committed to making sure Groundhog Day is somehow central to whatever my eventual thesis topic is. But, I've still got time to figure out what that will be. In fact, I probably won't be doing any actual work on that thing until well after this blog has ended, so expect some follow up entries after the 365 are moldering away on the interwebs.

Also not pictured is my signed copy of the screenplay (which turned out to be another copy of the second revision and not a shooting script). And, there are all my screencaps and the rest of my currently 405 image files, labeled and not. There are also cut clips from the film, including all the ones I've put on YouTube; copies of all the TV Time Loop Day episodes; several time loop movies; a few other Bill Murray movies... I've got Day Break on DVD around here someplace, plus copies of that show and Tru Calling on the computer. And, of course, I've got copies of Groundhog Day on my iPod, my iPad and the desktop computer (the iTunes copy and a separate copy in Dropbox in case I'm stuck on someone else's computer sometime and need to still watch the movie that day).

There's a lot of time put in, as well, obviously. Not just the 1 hour 41 minutes 4 seconds that the film is playing each day, but time spent thinking and planning this blog, time editing clips, getting or labeling screencaps, and reading the research material. And, there will be another expenditure of time at the end of this month heading into February; I'm going to Woodstock, IL, where Groundhog Day was filmed. Depending on the crowd and potential lines, I hope to view the film in the theater seen in the film, maybe on both February 1st and 2nd, go on the walking tour of filming locations (preferably on the 1st so I can explore some of the locations in more detail on the 2nd). I might bowl at the alley in the film--at least I assume that "Groundhog Bowling" on the schedule of events happens there and isn't some weird Queen of Hearts-type game involving rolling actual marmots. And, I definitely want to attend the symposium about the film, the director of which I've been in touch with.

I hope to meet some locals who got to be extras in the film, eat within the walls that once were the Tip Top Cafe, and see Woodstock Willie's ceremony on the morning of the second. I will not be in Woodstock in time for the dance on the 31st or I would have to find the craziest dancer and call her Debbie.

I assume my time in Woodstock will be cold but I don't imagine it will be bleak or that it will last for the rest of my life. But, if I'm lucky...

Today's reason to repeat a day forever, in Woodstock on February 2nd: to reenact all the events of Groundhog Day including driving a truck off the nearby quarry, stepping in front of a moving truck, electrocuting myself with a toaster and jumping off the Opera House tower.

(That last one should totally be a tourist thing on Groundhog Day, just set up an airbag and some bungie cords and let people leap to their "death.")