...and think i don't have a future

Notes on the final revision of Groundhog Day screenplay, continued.

There’s no reading of Hustler, just going back to his room to have a shower (p. 24). But, the Hustler bit gets lost in the film anyway. Seriously, just watch. Rita starts to get up almost as soon as he starts answering her question. She’s not very nice.

Page 34, Phil does the interviewing the groundhog thing. He knows where the groundhog is going to run, so he gets there first. Then Phil talks to Phil:

PHIL
Since I have you here, I gotta ask—is this shadow thing legit, or did you look at satellite photos like the rest of us?

This is only the first resumption, by the way. The script is taking its time a lot more than the film does.

Both the pencil breaking (p. 35) and the room demolition (pp. 41-42) happen. There was some confusion a while back over whether or not they filmed the demolition scene at all, recall.

In the film, there’s only one “Phil? Like the groundhog, Phil?” joke. But, in Rubin’s original script, that was a regular thing, and in this final revision, there are plenty.

PATRONS
Have a good nap, Phil? (another) Let’s hear some groundhogese. (another) Any more predictions?

VARIOUS VOICES
Hey, Phil! Shadow scare ya this morning? (another) Have a good nap? (another) Hollow log too small for you?

Just for a few examples.

Page 42 (appropriately, given the #’s significance) offers an explanation that could cause the time loop:

SCIENTIST
(with authority)
Now if the moon exerts a gravitational pull strong enough to cause the tides, then it may be theoretically possible for a Black Hole or a Singularity of sufficient magnitude to actually bend time enough to cause it to fold back on itself.

I mentioned not long ago the Frog Prince sequence from earlier drafts. It’s still here (pp. 44-45)... I’m not sure if they ever filmed it, though.

More days pass in this revision before Phil hangs out with Ralph and Gus—that takes place on the third resumption in the movie. Phil tells his Virgin Islands story (and that scene’s on right now, nice timing) then there is a bit more conversation than in the film:

GUS
If you’re not happy here, why don’t you try someplace else?

PHIL
Because if you take 36 east or 310 north—you hit blizzard. If you try riding a horse west over Sutter’s Arbor? Blizzard—and a sore butt. And when I hot-wired a snowmobile and headed south—

PHIL
Yeah, plus I got a barbed wire body wrap and lost a great deal of blood.

Gus holds up half a glass of beer.

PHIL
(exasperated)
How would you feel if you were stuck in one place, if every day was exactly the same and nothing you did mattered?

Gus and Ralph realize he could be talking about their lives.

RALPH
That about sums it up for me.

PHIL
So how full is your glass?

GUS
(depressed)
I’m down to about a quarter tank here.

Ralph finishes the last of his beer and regards his glass.

Phil gooses her, grabs a sweet roll, and heads for the door, starting to believe now that he can truly do anything he wants to.

Page 62, Phil buys a car before his date with Laraine (who, annoyingly, Ramis describes as “a very trashy-looking girl”)... and he’s driving around town greeting people before he gets to the theater. That’s when he he sees Nancy and...

Nancy can’t figure out who he is.

PHIL
My own fiancée—doesn’t even remember me.

And then a few minutes later, I’m still reeling and Saer points out how freakin’ huge the beer mugs are at the restaurant on “date night.” Seriously, they’re basically the size of the heads of the old folks drinking them. And, I once paid close attention to that table while dealing with the IMDb goofs page, and didn’t notice the size of those things. That’s depth charge size (thanks, Dennis Miller).

And, then I’m sitting here just watching the movie because what else is there to say? 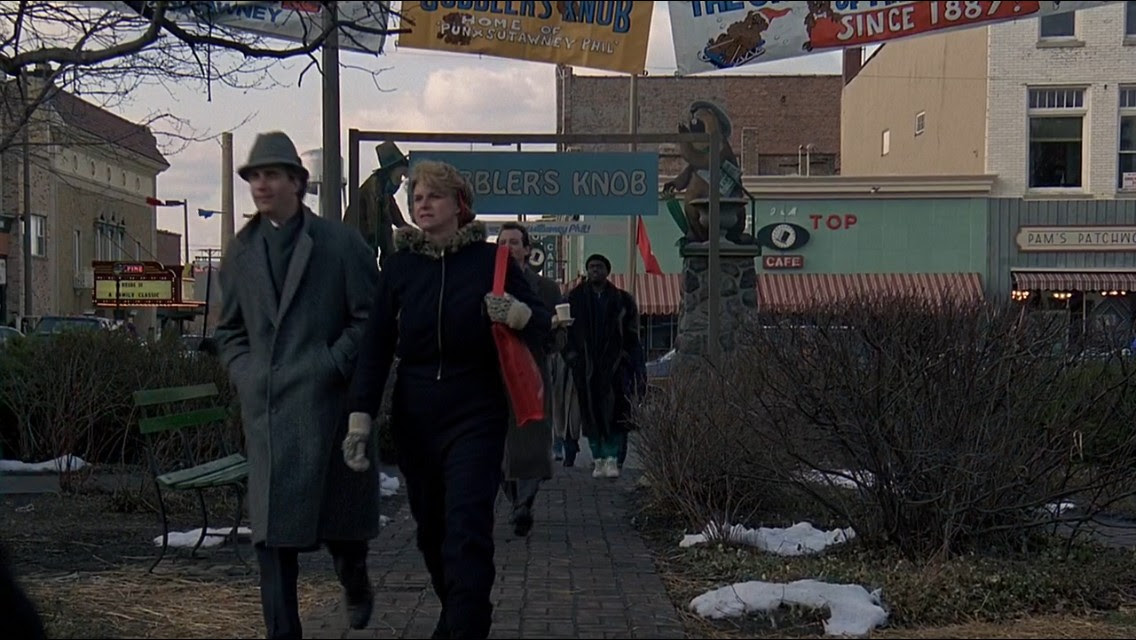 And, you wouldn’t know what’s interesting, there. It’s not that Sherlock is just arriving before Phil, though he is. It’s that up on that pillar— 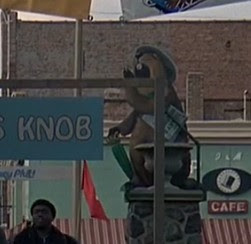 —a different version of this which, I got to see one of in the Woodstock Library: 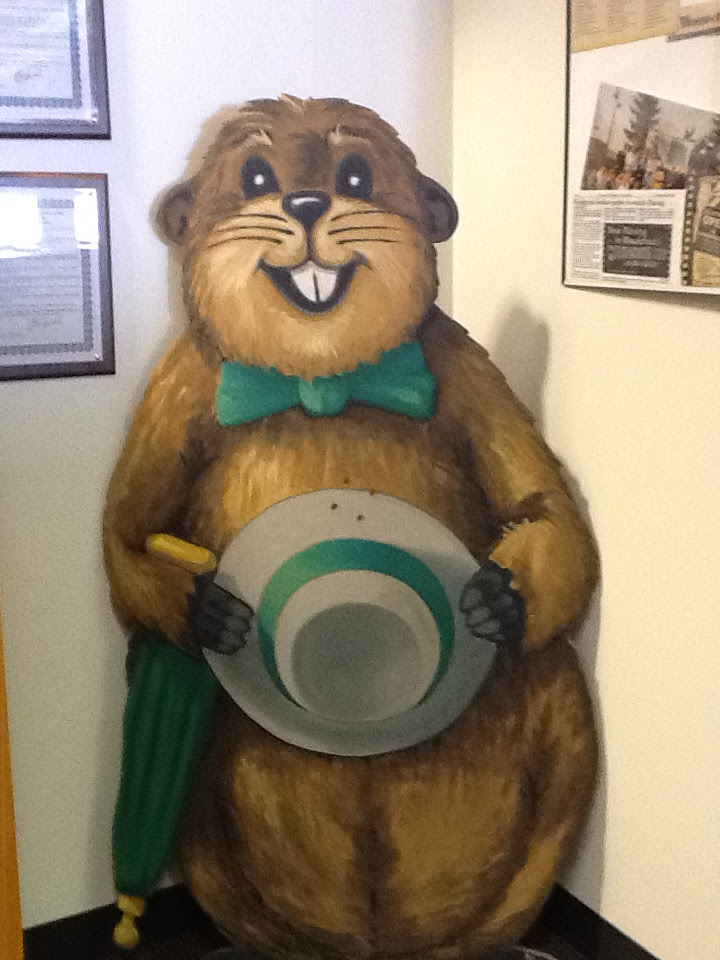 And, I’ve never noticed that yawning one before. Or that, whatever-it’s-doing one on the other pillar. 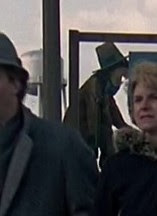 You think you know a movie...