you don't remember me, do you?

Another scene that I don’t know if they actually filmed it is the party scene:

There is a very wild party in progress. The revelers include everyone from college kids to bikers to farmers.

[who Phil called out by name while driving around in his new car just a couple pages earlier] runs into the scene, barking at the activity. Then Bruno runs over to Phil who’s just sitting on the sofa staring at the fake fire. He’s wearing a really loud sportshirt, a number of gold neck chains and rings on every finger. On his lap is a whole chocolate cake which he is absently eating with his fingers. A very trashy looking girl named ANGIE in too tight-jeans and halter top is coming on to him, practically licking his ears. (Ramis, 1992, March 5, p. 64)

She’s graduated a little bit. In earlier drafts, she was present at a BIKER BAR first, and she was a slut named ANGIE and she was accompanied by another overweight, not very pretty MADONNA WANNA-BE and they were both dressed in too-tight jeans and bullet bras. Additionally, Angie before pops a couple of mystery pills into his mouth and Phil washes them down with a shot and a beer. (Ramis, 1992, January 7, p. 59)

PHIL
(more to himself than to Angie)
Eventually you’d just get tired of screwing around and then you’d want a real relationship, wouldn’t you?

PHIL
Someone decent, right? Someone you respect, who respects you.

ANGIE
I guess so.

PHIL
(still musing)
It’s tough to find a relationship like that, especially if your time is kind of limited. But you still have to try, don’t you?

Still too on-the-nose, too much tell, not enough show. Give us the party scene, sure, show us Phil not enjoying it. But, then add his dialogue? Might as well add voiceover. 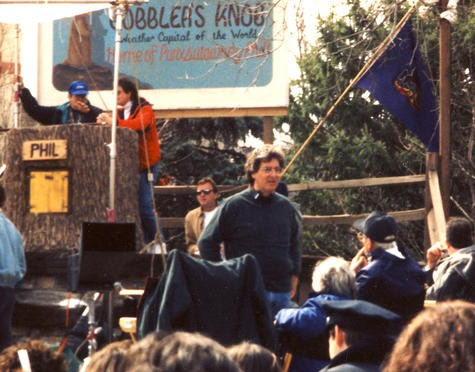 You know what’s weird. In spending a year with this film, somehow I didn’t look for many behind-the-scenes shots like that—or these videos (1 2 3 4 5 6) I also found last month when I was finally looking for that sort of thing... and now I’m looking through my photos from the Woodstock Library, because I remembered some production stills on display there—but I don’t have a good image of them—and I see this: 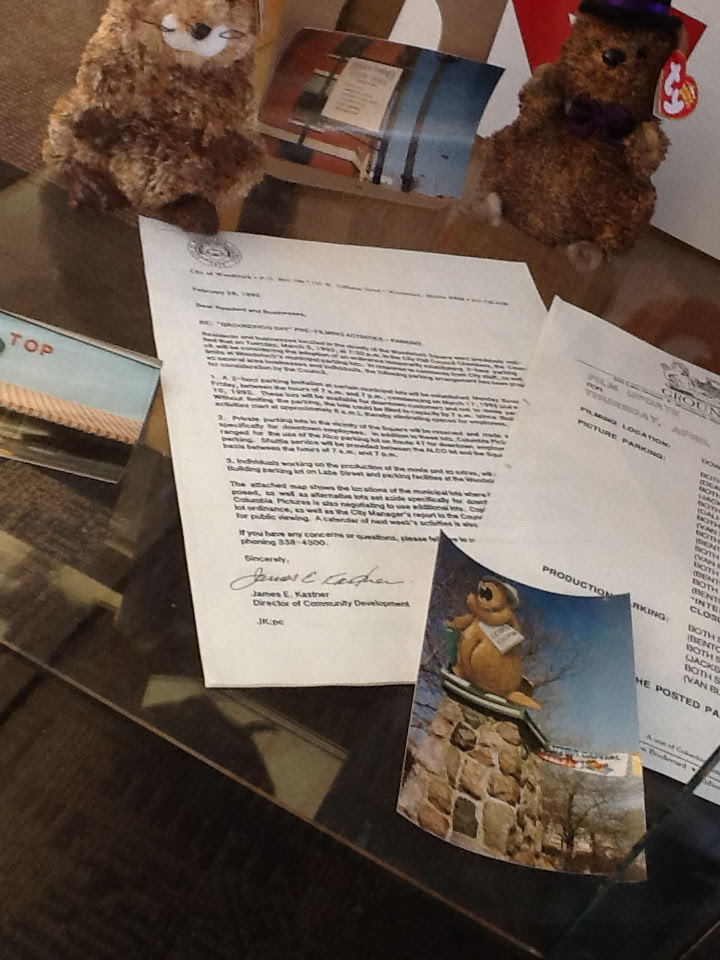 Look at that photograph (the one in my picture)—it’s that yawning groundhog I thought I’d never seen before. I should have been studying everything in those library displays. It’s not like my time was limited. The festivities had died down and I wasn’t flying out until the next morning.

And, I don’t know why I’m talking about that trip again, and spending a few hundred words on a single scene that wasn’t in the film. I’m supposed to be getting on with the final revision of the screenplay, finish with Groundhog Day and move on... until next month. But, I knidn of miss this movie. Which should be strange, but really isn’t. Been a weird week. Hit September and still had barely written any actual content for my thesis—plenty of notes and, to be fair, once I get past the introduction, there will be a good chunk of the paper that will write itself, but not much actual content. And, then there was some family drama the other day that has had me a little edgy the last couple days. I think I wanted something familiar, something comfortable. And, as Phil eats his angel food cake, I kind of want some of that, too.

Or something. Summer break has gone on too long. I need to get out more. Or, given that this blog killed my car, maybe have people over. But, I don’t like too many people and not too many people like me. Options are limited.

On with the screenplay.

Instead of “I’m really close on this one, really really close” after Rita’s perfect guy checklist, Phil says, “I hate this guy” (p. 67A). Too bitter for the start of date night.

Rita’s favorite drink: Campari and soda with a slice of orange (p. 68). Not sure when it turned into sweet vermouth on the rocks with a twist (Harold Ramis’ wife’s favorite drink)—maybe on the set in the fake bar inside the courthouse, day of filming. Just don’t know.

(Just wondered if I’d ever written about Chris Elliott’s brother taking his place on set (his face hidden by the camera he was holding) when Chris was sick. I don’t think that anecdote has ever come up here.)

And then the movie gets to the rock quarry and I’m distracted by Google Earth. I know where the quarry is (was), but there’s that one road from the chase that I have still never found (and about which the location manager was no help). Occasionally, I get on there and explore roads around Love’s Park (where the quarry is), McHenry (where Bob Hudgins told me the chase was probably filmed), Woodstock (where the movie version of Gobbler’s Knob is and where the chase begins), and places in between. It’s got to be a wooded road. and it might—and, if it doesn’t I will never find the location—have an intersection of the “main” road with another with two stone pillars at that (presumably) driveway), and the main road is heading into a hilly area. That last part is what’s hard to find in that area of Illinois; it’s all just so flat. But, I digress...

That’s what I do. If you could make a career out of digressing, I would be so good at that. I mean, the movies’s coming to an end soon—Phil just made his Chekhov speech—and I’ve managed to get from page 64 to page 68 in the final revision.

Gertie and Ruby and Sara are on now, and I haven’t even gotten to their page yet.