Let us follows John Cusack back a few years to a movie that Siskel and Ebert apparently rather disliked--two thumbs down, though the few links to the review video that I clicked didn't work so I can't offer specifics.

Lane Myer (Cusack), with all the pictures of Beth (Amanda Wyss) on his walls, is like an even more obsessed--and more suicidal--version of Corey Flood (Lili Taylor) in Say Anything. (Seriously, I neglected to mention it while watching that movie the last few days, but Corey has a rather large cutout of herself back to back with Joe on her wall, plus a couple photos and a handwritten JOE ♡ ME.) Lane's suicidal-ness is played for laughs, of course. That's kind of the point to Better Off Dead.... His urge to kill himself is so insane he can't succeed at it. 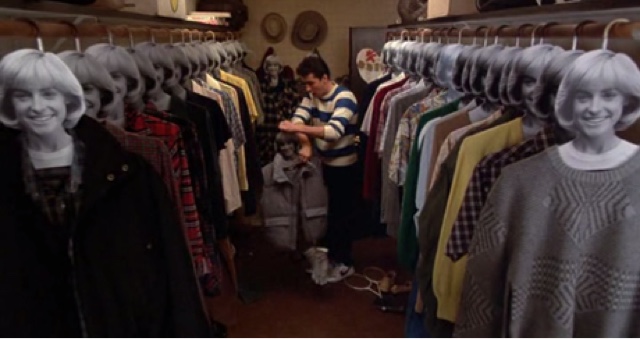 Honestly, it's hard to get into a serious discussion about this movie. I'm just enjoying watching it...

Perhaps I'll note the awesome along the way, worry about something more serious another day.

The flashback to Lane and Beth meeting with the voiceover bits and them rubbing their noses.

The Two-Dollar Kid, of course.

Everything Charles De Mar (Curtis Armstrong). "I've been going to this high school for seven-and-a-half years. I'm no dummy."

(And, I wish I had regular access to a car, and didn't have a conference all weekend because so many of the locations in this movie are around here. Hell, the Myers' house (and Smiths' house as well) is within walking distance... but I'm busy most of the week--fall quarter is about to begin.)

Jenny Myer (Kim Darby) and everything she does... "It has raisins in it." Beat. "You like raisins." It's like Mattie Ross grew up and traded in her headstrongedness for emptyheadedness.

"Now that's a real shame when folks be throwin' away a perfectly good white boy like that."

Charles laughing excessively at Roy's line at the dance.

Everything about Monique (Diane Franklin), but especially how she deliberately trips Lane by grabbing his foot as he goes up the stairs, and that testicles/tentacles confusion.

(And, for those of you playing Groundhog Day Project Bingo at home, I think that may be the first mention of testicles. So, check your Bingo cards and see if you won.)

I've never been that amused by Badger's (Scooter Stevens) antics except for cutting all the cereal (and cat food) boxes. But, Lane's "Happy New Year" to all the women in his brother's room is hilarious.

"You gotta have pride and class in this business," says Rocko (Chuck Mitchell) as he cleans his dental bridge in his coffee. (Mitchell, of course, also played Porky and here he runs Pig Burger.)

Mr. Kerber (Vincent Schiavelli), the mailman, and even Barney Rubble asking if they can take out Beth.

"No thanks. I already had breakfast."

"All you have to do is go that way really fast. If something gets in your way, turn." Life lesson, right there.

"...the state of Northern California..."

Let us end with this (which I made a couple years back):

Oh, and the last line of the credits: