RITA
There’s something so familiar about this. Do you ever have deja vu?

PHIL
All the time.

A moment where, presumably, Bill Murray’s sense of humor overcame Harold Ramis’. Murray’s line is a classic—Didn’t you just ask me that?—whereas All the time is plain, boring, forgettable.

Just after that, Larry has a nice moment in the final revision that he doesn’t have in the film. In the film, we see Phil steal the distributor cap from the newsvan, but we don’t get to hear that some horse’s ass bought every distributor cap in this town. That detail was in earlier revisions (as early as the Ramis’ second), but this revision adds one more detail; Larry tells Rita, I’m going down the street to try and steal one. Wish me luck.

Page 72, Phil recites the French lyrics, but Rita doesn’t suggest he speaks French. Instead, he immediately follows up the French with: It’s Belgian, not French, of course, but I like it. The lines are, of course, French. The author: Belgian. I read that line as Phil saying the lines are Belgian, which isn’t accurate. (And, once again, for the record, Phil does not speak French.)

Ramis follows this bit with some more on-the-nose nonsense. First, Rita smiles, entranced. That’s not the nonsense bit. You need directions like that in the script. But then... Over her romantic look we hear the song, “I Can’t Get Started With You”. First of all, it’s rare that any script lists specific songs in it. (Though, Groundhog Day always had “I Got You Babe.” This song Ramis references—lyrics by Ira Gershwin, music by Vernon Duke—has some lines that are about as on-the-nose as you can get, at least if whatever version they would have used included this verse (not always included, apparently):

I’m a glum one, it’s explainable,
I met someone unattainable,
Life’s a bore,
The world is my oyster no more...

Some character insight (potentially) when Phil first gets Rita in his room. After a line close to what we get in the film—No, this is real. I love you...

RITA
Stop saying that! Do you get off on manipulating people? Did you have some problem in your childhood?

PHIL
(ingenuously)
I had a terrible childhood.

RITA
Well, stop taking it out on everyone else! I could never love someone like you, because you’ll never love anyone but yourself.

PHIL
But I can change! Just give me a chance. I can be sensitive and supportive and considerate—

RITA
You had your chance.

PHIL
(mumbling)
I love my mother—

She gives him a hard slap on the cheek.

RITA
That’s for making me care about you.

And she leaves on the same cue as in the movie.

This deleted scene, Phil standing outside the Pennsylvanian Hotel. Phil as stalker.

(I don’t usually try to embed videos anymore. Too much hit or miss on whether they even embed right. Old ones I embedded during phase one seem to still work right, but I add one now and something is just... off about half the time. But I figured I'd give it a shot.

Similarly, I gotta apologize if any of my images show up sideways or upside down. Apparently, you can load your images into some google drive that goes with using blogger, but I’ve always just linked them out of my website storage. Thing is, for whatever reason, google sees certain dimensions and rotates the image. Every piece of advice I’ve seen online about fixing the problem refers to settings in that google drive, which wouldn’t work with mine because I have not been using images out of there and there are far too many images involved now to bother.

Anyway, back to the script.)

This deleted scene, Phil playing pool. Detail that won’t matter yet, one of the players in the pool game (as scripted), Phil calls Gertrude... (In case I don’t make it that far today and this goes on even longer, Gertie is one of the old ladies in the car with the flat tire.) But, he’s calling a male player Gertrude. In the filmed (but deleted) version, he calls the guy Gladys. Still it’s odd to have him use a name that will (sort of) show up later.

This deleted scene, Phil bowling a perfect game. These deleted scenes are interesting separately, but together they would have been overkill.

This deleted scene, Phil taking a chainsaw to the ice sculptures.

Page 83: that scene with the three kids I wrote about last month. Not available as a deleted scene on the DVD or blu-ray, and I realize now I didn’t get into the scene’s content before (and, much of it comes word-for-word from Rubin’s original, by the way), so...

Phil stops. He has lost count. His lip curls up like an animal as he turns slowly, growling at the kids. They run away screaming with glee as Phil starts after them but a COP pulls up in a cruiser and gets out.

COP
You got a problem, buddy?

COP
(calmly)
Okay. Then let’s see what we can do about getting you out of here. You got a name?

Phil turns to the cop like a rabid dog, ready to strike.

PHIL
Yeah, like the—
(he rips the groundhog patch off the cop’s jacket)
—groundhog.

Some big new idea has formed in his mind.

Here’s a moment where Ramis is not as on-the-nose as Rubin, since, of course, Rubin had all the voiceover. Phil doesn’t rip off the cop’s patch in the original. He stops as if struck. Then, there’s voiceover:

It was so obvious to everyone else. Why hadn’t I seen it before?

...I am the groundhog, and he is me. I am Punxsutawney Phil, and forever shall my fate be linked to his. Whatever happens to him, happens to me. I finally saw a way out of this cruel existence. 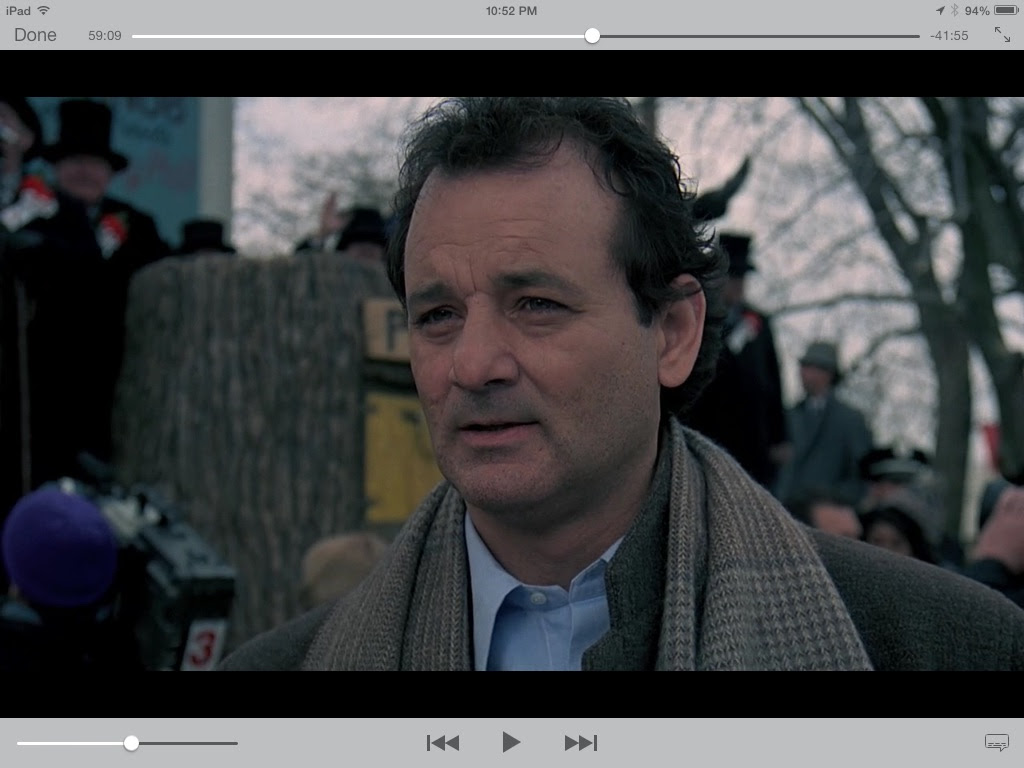 It plays better in the film than either version of that moment. It’s not explicit; Phil’s just doing his report, stream-of-consciousness style, and it just makes sense to go after the groundhog. He doesn’t need to spell it out in too much detail for us because that might actually play a little too... sane. Phil has lost his mind, here. But, he’s not really angry enough to rip off the cop’s patch. And definitely not clear enough to voiceover about it. He’s just Phil, saying the first thing that comes to mind. Nevermind the camera. Nevermind the crowd. Nevermind Rita who he’s been pursuing. Nevermind the world. It’s more despair and confusion than anger.

Today’s reason to repeat a day forever: to take each of these revisions line-by-line and not just acknowledge but examine each difference, use the script(s) for Groundhog Day to critique the entire revision process and screenplay structure (or lack thereof).

And, definitely to harp on the use of voiceover.