The problem with American Psycho--and there are many, of course, but one in particular that gets to me--is that Patrick Bateman is depicted as crazy. Sure, it's not entirely normal to kill people. And shouldn't be entirely normal to destroy the lives of others through mergers and acquisitions (though, to be fair, we do not see Bateman actually doing his job, taking over any companies, laying anyone off; we just kind of have to know that's what he does). But, aside from a few key moments, Bateman might as well be homicidal, yeah, but not necessarily mentally ill... He knows what he's doing. And he enjoys it. Only briefly at the end of the film does he seem to show any regret--when he calls his lawyer and confesses to the crimes we've seen and many more. Not long before that call, he has his truly (cinematically) insane moment; when he's standing at the ATM, the ATM tells him to feed it a stray cat. It's debatable (but pointless to debate) whether or not much of what he does is actually happening, because whether it's real or all in his head, it's still an elaboration on the way he lives his life everyday, how little he thinks of other people, how much above them he sees himself. But, this moment--this moment isn't happening. This is the psychotic break in all its cinematic simplicity.

(And, of course, it's when he threatens an animal that he becomes his most horrible. It's not the chainsaw chase. It's not the stabbing of the homeless man. It's certainly not his murder of Paul Allen with an axe, because that is staged as an amusement. It is Bateman putting a gun to a cat. It is Bateman stomping his foot down on a dog. The violence against humans is horrible, but expected. In reading about the film, I found a review of the book that details the grisly murders and mutilations contained therein, and how there are so many, and such grisly detail, that it becomes boring, mundane. Which seems to be the point. I suspect as much anyway; as I've mentioned, I have not actually read the book, but I suspect that the mundanity of the murders is the point. That is the satire of it, just as it is in the real world. Horrible violence happens every damn day, but we generally cannot be bothered to care because we've got our own bullshit to deal with. That poor dog, though. That poor cat. Those are moments that grab us.)

I am not watching American Psycho today, by the way. I am watching In the Company of Men, which without violence or murder covers some of the same themes--the cruelty men are capable of, especially toward women. The interesting thing, though, is that, while I do enjoy both films, In the Company of Men is less audience friendly by coming a bit closer to a believable reality. None of the hyperreality of Patrick Bateman's world; instead, we have two businessmen, Chad (Aaron Eckhart) and Howard (Matt Malloy) deliberately seducing and ruining the life a deaf office worker, Christine (Stacy Edwards), while on a business trip. Roger Ebert calls Chad in particular "true evil: Cold, unblinking, reptilian." Chad, he argues,

makes the terrorists of the summer thrillers look like boys throwing mud-pies. And for every Chad there is a Howard, a weaker man, ready to go along, lacking the courage to disagree and half intoxicated by the stronger will of the other man. People like this are not so uncommon. Look around you.

And, therein lies the rub. Why American Psycho can be much more entertaining because it deliberately goes so far over the top, but In the Company of Men is the kind of thing most people would not want to sit through once, let alone watch again. But, a) I will give just about any movie a shot, b) I love the despicable nature of Neil Labute's characters and the absolute horror of his scripts (and this is also his directorial debut), and c) I think movies about such people can be more useful sometimes than movies about pleasant people and pleasant occasions. They can tell us a lot about ourselves--as individuals and as, you know, society. For example, Patrick Bateman's murderous impulses map directly onto how imagine his business impulses are. We see bankers as predatory. Chad and Howard, here in In the Company of Men, on the other hand, are not so predatory in their work--I'm not entirely sure what they're doing in their six-week visit to a different branch of whatever business it is they work for... The only thing that matters is that they work for some corporation with regional offices. Might as well be Pierce and Pierce from American Psycho or whatever that company is where The Narrator of Fight Club works. Mind-numbing office where people "push papers around" all day. Work is work, and the more ruthless man (or woman, but that's not what these particular stories are about) gets ahead. Chad clearly thinks very little of women, but he also casually insults other men in this film, usually behind their back. When the film spends time with Howard, it's a different beast--he genuinely develops feelings for Christine while Chad, you can see, is manipulating his interactions with her to get what he can while he can. One can imagine that even without the revenge notion he suggests in the opening scene (he claims his girlfriend left him, which turns out to be a lie), Chad probably finds a woman to seduce on every one of his business trips.

That Howard's interactions with Christine are so close to Chad's, though, is sort of the point. The genuine romantic pursuit and the deliberately faked version of the same--to be fair, both are just scripted versions of the real thing--are inherently the same. It's a cynical idea but a useful one to consider. I don't think that is the potentially offensive part of this story; that would be the cliche of Christine falling for the worse guy, an idea that borders on Labute trying to prove Chad right. I've read other plays (this was a play before it was a film) by Labute--I even performed an interpretation of one of his pieces when I was still competing in speech and debate--and I have seen other film adaptations, so I trust that while he certainly invokes the darker aspects of humanity, he doesn't celebrate it. He's telling morality tales, trying to convince us of how horrible we can be.

And, Aaron Eckhart is so good at playing smug and heartless. 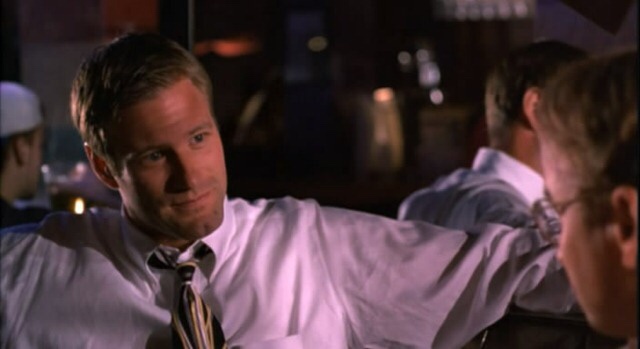 Patrick Bateman is murdering people, but this horrible is the harder to take. It's too close to real. Or, at least, it is too close to a real that we see in our daily lives. There's plenty of murder going on. Most of us don't really see it, though. What we do see are plenty of movies that deal in violence and death. It becomes mundane, common. The murderous impulses of cartoonish movie villains pale in comparison to the cold, deliberate, calculated cruelty of Chad Piercewell.