into a pretty stale routine

Christmas movies in September--that's the way to go when you you just wasted a few days on increasingly bad spoof films, were stuck in the 1980s and might drift back into them again soon but just don't feel like an 80s film for a change.

(I'm considering doing some classic horror films next month--remember, last October, I watched slasher films. And, after The Visit I kinda wanted to watch more horror films. But, it's too early. Not enough days before the 2nd (Groundhog Day again) to go forward with another set of movies I've got lined up, so....

Today's movie came out in 1994, by the way. It's The Ref. It starts off with some sort of stereotypical small town Christmas scenes, kids looking in store windows and whatnot. Then we join a married couple, Lloyd and Caroline Chasseur (Kevin Spacey and Judy Davis) in couples therapy. This is not going to be your usual Christmas movie, clearly.

...I'm staring at my Netflix queue, which swelled up recently as I added movie after movie that might be worth watching for this blog, and nothing is jumping out at me...

Meanwhile, Gus (Dennis Leary) is committing a bit of thievery, and these two plots are going to get shoved into one another pretty damn soon. I rather like this movie, have watched it many times, and it's one of many films the lines from which I will quote in casual conversation, even with people who don't get the reference--"Didn't your alien leaders teach you that before they sent you here?" is a surprisingly useful phrase.

...I mean, I've got a few sequences of films set up on my queue, legitimate series of films and also thematic groupings. And, not one was jumping out. Tomorrow, I think I might obsess about the 80s again, get that stuff out of my system. For now, 1994.)

#4 its opening weekend behind Guarding Tess, which I think my mom convinced me to watch at some point but it was immediately forgettable, Lightning Jack, which I cannot recall what that movie is because, for some reason, it makes me think of Cactus Jack, or Cacti Jack, I guess, since two of those come to mind the one in The Villain (Kurt Douglas), and the one in Campus Man (Miles O'Keefe)... apparently, Lightning Jack was a Paul Hogan western. I was considering throwing the original Crocodile Dundee into my 80s pool of movies, so I'm surprised I didn't remember this. I think I may have even seen it.

Anyway, #3 was Ace Ventura: Pet Detective in its sixth weekend. Saw that one its opening weekend. Nothing else too notable on the top box office except the fact that Jurassic Park, in its 40th weekend, was still #20, pulling in $187 thousand. That is some serious staying power. The Ref made $3 million that weekend, would eventually make $11 million. Jurassic Park was at nearly $350 million after 40 weeks. This movie should have included some dinosaurs. It deserved a bigger audience. (Deserves a higher score on IMDb, too.) Entertainment Weekly put it on a list of "The 50 Best Movies You've Never Seen" a few years back. Aside from maybe a few odd acting notes from the son Jesse (Robert J. Steinmiller, Jr.)--and, really, I think it's just a specific tone in his voice that doesn't sound right to my ear, not necessarily a performance problem--this movie has pretty much nothing wrong with it. It adds characters as it goes and juggles them quite well. The trio at the center of the film is pitch perfect, the couple's troubled relationship getting in the way of Gus' need for hostages.

The heart of the film is those three, but especially Lloyd and Caroline, who clearly once loved one another but are too caught up in the problems that have come along in the meantime to really even see one another anymore. The great thing that LaGravenese's and Weiss' script and Demme's direction offers is that this couple is also so preoccupied with their problems to ever be particularly bothered by being held hostage. 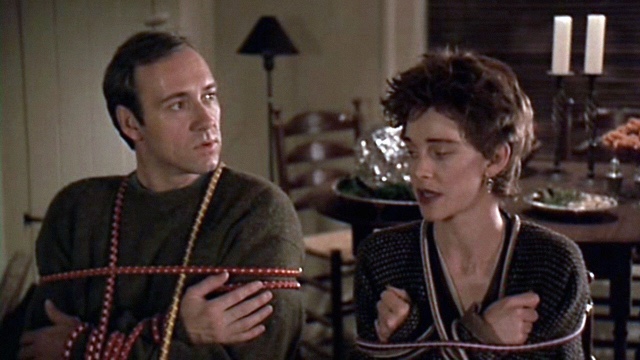 You know, you and my wife have a lot in common. You both think you have some right to life working out the way you want it to, and when it doesn't, you get to act the way you want. The only trouble with that is someone has to be responsible. I'd love to run around and take classes and play with my inner selfness. I'd love the freedom to be some pissed-off criminal with no responsibilities, except I don't have the time! But, you don't see me sleeping with someone else. You think my life turned out the way I wanted because I live in this house? You think every morning I wake up, look in the mirror and say "Gee, I'm glad I'm me and not some 19-year-old billionaire rockstar with the body of an athlete and a 24-hour erection!" No, I don't! So, just excuse the shit out of me!

The kind of thing Spacey can pull off so well. Leary can also rant like the best of them, but most of his rants in this film remain pretty short (for the most part; he's got a good one with Jesse about how his life isn't great). His Gus is more like a short fuse on the verge of, but never quite going all the way to, exploding. While Lloyd and Caroline have already exploded--to immediately belabor this metaphor--and are heading in the opposite direction, finding the quiet that used to be between them.

Plus, there's an overbearing mother, an inept police force, and a drunk Santa Claus.