some right to life working out

(Got a mention on reddit today, so there have been some new readers today--a nice jump in pageviews. Thing is, they're probably looking for Groundhog Day. Recently, I spent another week (762 763 764 765 766 767 768) with that film, and I still watch it once a month, but my 365-days-in-a-row ended more than two years ago. Lately--i.e. phase three--I try to watch a different movie each day, but occasionally they repeat if I've got more to say (like today). I'm writing my Master's Thesis about writing this blog (primarily that first year with Groundhog Day) and there's been talk about a book, but I haven't had time to look into that possibility just yet. Meanwhile, there are movies that need watching; and mostly, I pick movies I have seen before so that I've got room to go off on tangents or prepare ahead with research. With today's film--The Ref--it's the former. Enjoy.) 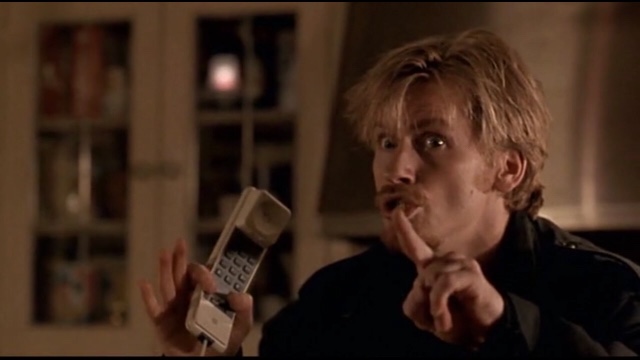 The synchronized "Fuck you!" that ends the opening scene at the marriage counselors provides a nice hearty laugh here. The Chasseurs (Lloyd [Kevin Spacey] and Caroline [Judy Davis]) are awesome, like some twisted final step along the romantic comedy yellow brick road. They have great conversational timing and interaction even when trying to verbally destroy one another. They make the breakdown of a marriage fun.

Which is why the movie works and also why the movie constantly undermining their inability to get along also works. The film offers us the Chasseurs on the verge of a third act of their romance; an obstacle in their way... No, Gus (Dennis Leary) is not that obstacle. Gus, of course, is the--in Hollywoodland, only--therapist they really need to get their shit together. Doesn't have to be realistic. We just have to buy into it, and do we ever. I understand the original ending had Gus get caught by the police to demonstrate that crime doesn't pay or some other non-audience-friendly bullshit--seriously, test audiences hated it--but we are rooting for Gus. We don't even have to know the rich guy whose jewels he stole. If we're seeing a movie like this, we're probably middle or lower class and we just don't care about those details. The irony, though, is that we do care about Lloyd and Caroline as well as Gus. But, however much the film shows them as a bit better off than the rest of us, it immediately pulls away from that with Caroline telling Doctor Wong (BD Wong) how Lloyd's mother owns their house and their business and they owe her money. Caroline is a bit more of a free spirit than her station in life suggests, and we learn as the film goes on that Lloyd used to be more like her and not so tightly-wound as he is now. And the film quite brilliantly introduces the horrible mother/mother-in-law that has come between these two. And she is a horrible person, to be sure. Perhaps her worst trait is that she thinks she is better than everyone else around her, and she constantly reminds everyone else of it.

See, in addition to the marital issues on display--or rather, driving those issues--are some huge class-divide problems. The local police force isn't just comedically inept; they are inept specifically because the rich locals rely on their connections with higher ups like district attorneys that they know and so the local police just don't have any real experience. Jesse (Robert J. Steinmiller, Jr.) is not content with his parents' lifestyle, but it seems that might just be because his father puts too many rules and demands upon him, like his own mother presumably did all through his life and, really, still does. Gus appreciates the Chagall hanging on the wall by the stairs, while Caroline cannot stand it simply because they got it from her mother-in-law.

Just now, Gus was looking at some framed photos of Lloyd and Caroline (and, in a few, Jesse) and the film sets up a simple dynamic there: Lloyd is looking in several of them at Caroline, but she is never looking at him. And, I get the notion in my head that Caroline was the free spirit that actually got Lloyd away from his overbearing mother for a while, allowing him to be happy. But then, their restaurant didn't go so well and Lloyd panicked and, well, this is up for some debate, I suppose (unless you've seen the film already), he took money from his mother to get back on his feet at the behest of Caroline, who should have known better, but she was probably as panicked as he was. This is not a movie about people who are comfortable where they are. This is about people who tried to live how they wanted to live once upon a time and realized that the world just doesn't go for all that. Sometimes, no matter how much you want your life to got a certain way, events just do not work out in your favor. We like to believe--and it's part and parcel of the American Way for those of you reading this here in the United States--that we can succeed at anything we do as long as we just believe in it strongly enough and put in the work, and how dare anyone tell us our dreams aren't worth holding onto. We're all created equal and it's our fault when life doesn't go how we want it to go. The Protestant Work Ethic means people like Gus are drains on the system, with no moral leg to stand on. And, Lloyd, on some level, deserves his wife's derision because he failed.

Meanwhile, you've got Siskel (J.K. Simmons) blackmailed by Jesse because he... did something with some topless women. The details are sketchy; what matters is that Jesse operates on a level where blackmail is perfectly reasonable. That is where his life has taken him. His parents have that house and their business and he's not content. He has to ruin someone else's life (or threaten to do so) in order to... I don't know, to feel something other than powerlessness, maybe.

Gus' exchange with Jesse is vital to understanding what this film is telling us. This exchange:

JESSE
I've got a blackmail deal going in school.

GUS
Blackmail? What are we, a buck ten? You're doing blackmail on people?

JESSE
Yeah, I needed some big money fast. I was desperate. I wanted to get out of here.

GUS
Desperate about what?

JESSE
Let's see. I got two years, four months left in military school. My parents hate each other. My father records every mistake in my life like he's preparing for my parole hearing. I don't get to do anything by myself. And I live in the suburbs. You figure it out.

Then, there's some talk about Gus' usual deal, making some money off a score, heading for Jamaica, then coming back again when the money runs out. He was supposed to retire on this latest score.

JESSE
Why you quitting now? You got a great life.

GUS
Let me explain something to ya, kid. What I do, running around stealing shit--that may sound great when you're fourteen years old, but it sucks just a little bit when you're thirty-five, no family, no house. I got a partner who's fifty. He's an alcoholic. He still can't figure out why they took Happy Days off the air. Then, on TV every day, I see kids like you on these talk shows. You got everything, opportunities up the ass. You got a family to come home to. And, what do you do? You bitch and moan because things don't go your way. Well, you know what? Welcome to the real world, where most of the time things don't go your fucking way.

JESSE
Easy for you to say. Everything goes your way.

Jesse is too blinded by his own urge to escape to realize the obvious--that Gus is trapped not only in the Chasseur house on Christmas Eve but in a lifestyle he never would have chosen for himself if he could have done otherwise. Because, all too often, that is how it goes. Maybe you get the benefit of a second (or third) chance, you get to reinvent yourself--for me, as a teacher--and it might even go well. But, the idea that every failure is one's personal fault bugs the crap out of me. Hell, by my reading of Weber's Protestant Ethic, Gus is a good person because, as he tells Lloyd, he works for a living.