i don't want to take sides

Their #1 is what they call the--and I'm not sure this is a word--listiclization of everything. Two years past their piece, how many clickbait articles offer up top ten reasons for such and such or the top 18 excuses for whatever, you won't believe what #14 is.

Their #2 is about vinyl, and yeah, hipsters totally want vinyl to stick around. Their #3--the rise of DIY creativity--which, yeah, YouTube and Vine and every other online platform for Joe Schmo to be famous. Their #5 (which doesn't get numbered in the piece--and yeah, I realize I skipped #4, bear with me) is your preferences are still bullshit. Political debates about Trump mixing up 9/11 and 7-11 or Hillary's hot sauce or whether or not Ted Cruz was a) the Zodiac Killer or b) on Maury; or racial like response to the recent announcement that Harriet Tubman will replace Andrew Jackson on the $20 bill; or pop cultural like responses to Batman v Superman or #OscarsSoWhite. No topic is too big or too small for any random person on Facebook to chime in. Hell, I'm one of 'em. "Hoe can it be bullshit to state a preference?" Rob asks Barry. On the Internet, it just is.

And, of course, there's Film School Rejects' #4 - male entitlement and self-involvement lives on. And, I'll just give you the whole thing:

Given the wave of misogyny manifesting itself in the celebrity nude photo leaks, GamerGate, and Jian Ghomeshi scandal in Canada, and more, it's hard not to see High Fidelity's Rob--fair or not--in a different light. His bitter fourth-wall breakers about his exes recall the petulant anger of Zoe Quinn's blogging ex. His "What's wrong with me?" Whining sounds like it comes straight from the "Nice Guy" playbook.

Yes, Rob admits that he's an asshole (though he winds up mansplaining it away a bit), and yes, much of his behavior is played for comedy or mild (at best) condemnation, but it's still hard to not let his male entitlement rub you a little bit the wrong way in our current cultural climate.

Which, I will just say, is the fucking point. Nevermind the "current cultural climate" or the cultural climate in 2000 or the 90s or the 80s or the 70s or when the fuck ever, it's played for comedy because no one wants to watch a movie about an asshole being an asshole and not get some joy out of it. Rob Gordon is an asshole. Even when he's cognizant of it, he continues his assholery. Even when he gets back together with Laura after a movie's worth of obsessing about what's wrong with him or not wrong with him, he flirts with the reporter and offers to make her a tape. Rob is not supposed to be taken as an ideal, or even necessarily a good guy, but we're stuck with him for the course of Nick Hornby's novel and for the length of this movie, and we should spend time (as readers or movieviewers) with horrible people because it's good for us. You gotta spend time with bad people or around things you don't like. If nothing else, it offers some perspective. 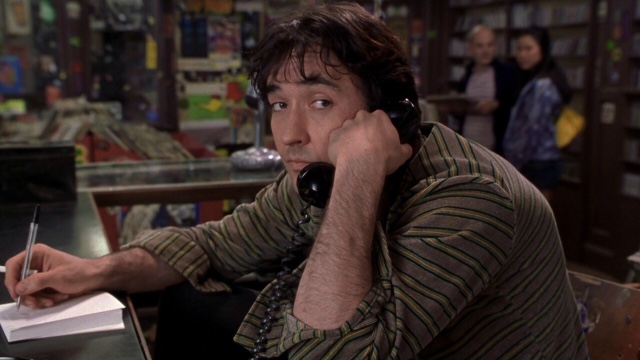 Lauren Duca at Huffington Post, last year, wrote a whole piece about Rob. She called the character the "one part [of the film] that feels dated." She quotes that second paragraph from Film School Rejects' #4 then she sums up Rob as follows:

Rob spends the majority of the film moping around because women don't want to have sex with him.

Except, that one isn't true. Aside from Rob's obvious ability to get women to have sex with him--notably just in the present of the film, there's Marie de Salle (Lisa Bonet). The only girl in the film who he specifically laments won't have sex with him is Penny Hardwick (Joelle Carter), and that is specifically hormonal teenager Rob and is not supposed to be representative of present Rob...

To be fair, Rob is kind of an asshole in a whole other way after he meets with Penny in the present. She points out that he rejected her and he celebrates that fact because that means she doesn't belong on his top five break up list.

He cites his No. 1 worst break-up as watching a girl in middle school kiss another guy after she had kissed him. At age 35, he sees all the other failed relationships as casually tied to that pubescent experience.

Not quite. Alison Ashmore is only listed as #1 because he goes in chronological order. And, who doesn't compare all of their relationships to the first one? But, more importantly, the film never suggests that Rob's (and Barry's and Dick's) list-making is a good thing. Boiling everything down to favorites or bests or worst song. Everything becomes an abstract. Including Alison, Penny, Jackie, Charlie, Sarah, and Laura.

In recounting his top-five worst heartbreaks, Rob acts like he has been denied some inherent right to the bodies of all the women he has dated (and can apparently only relieve the resulting self-loathing by searching for the reasons they wouldn't sleep with him).

Here Duca references the Penny Hardwick thing, Rob celebrating after she compares her sex with her next boyfriend to rape. Nevermind that Rob's real assholeness is that he is so self-absorbed that he presumably doesn't even hear that part. I'm not denying that Rob is an asshole. In fact, that is my point. But, to suggest that Rob as a character is dated suggests to me 1) that men aren't assholes anymore, which is clearly not possible, 2) that we can't or shouldn't have asshole characters anymore, which would put such a limit on storytelling that it's ridiculous and 3) that the film didn't want to us to think him an asshole in the first place and his assholeness is neither caught up in the time and place of Chicago, 2000 (hell, the book is set in London). The problem is not that Rob thinks he has an "inherent right to the bodies of all the women he has dated" it is that Rob is not mature enough to separate out sex and love and so he obsesses about sex with Penny and with Laura and about whether or not Laura has had sex with Ian yet. Sex is where he sees love and love is where he sees sex. And, oddly enough, having sex with Marie helps him start to get past that.

(The order of events might have worked better if he had sex with Marie after the phone call in the rain, so Rob's progression from asshole to recovering asshole was a little more linear, but life isn't linear. We don't recover from our bad choices without lapses. Not always. Hell, for dramatic purposes, linear would be boring here.)

Duca talks about a conversation she has with director Stephen Frears. She asks him, "Did you include any of those plot elements as a means of satirizing male entitlement?" Frears responded, "We didn't have words like 'male entitlement' back then! ... Don't you know men like that? That's what life is like. There are a lot of awful men like that." Awful men. Whether you think it needs to be satire or explicit commentary on it or not, Frears thinks Rob is awful and so does the film or we wouldn't see Penny distraught as he leaves her on the steps of her house, we wouldn't see Sarah looking like she wants to call Rob back as he's walking away from her apartment. We wouldn't see Dick and Anaugh getting together... But I get ahead of myself.

Three things in the film matter in regards to this discussion. 1) As Rob leave's Sarah's (Lili Taylor) place, he tells us, "I could have wound up having sex back there. And what better way to exorcise rejection demons then to screw the person who rejected you, right?" I must admit Rob might only have been glad to leave Sarah behind because of how her life isn't going so great in the present, but he adds, "But, you wouldn't be sleeping with a person. You'd be sleeping with a whole, sad, single-person culture." The problem is not that Rob obsesses about the women he's been with, the women who have rejected him, it is that Rob's whole life is wound up so tightly in two things--music and his romantic relationships. And right from the opening dialogue, he has tied together those two things. That's the kind of guy he is--he overthinks his relationships, comes up with ways to move past his guilt at rejecting or his pain at being rejected and he gets on with his life. 2) Dick (Todd Louiso) and Anaugh (Sara Gilbert) offer up something more genuine, and while Barry jokes about it, Rob takes a moment to watch them together out on the street. This is the film making us compare, and letting us know that he is comparing, Rob's relationships to this budding one. This is a guy who mythologizes one of his exes--Charlie (Catherine Zeta-Jones)--as if she's not even human. And, here he gets to see genuine human interaction. And, we've already seen Dick and Anaugh's prior interactions talking about music. The movie knows that Rob's not good at relationships. That's the point. The key is, at the point that he spies on Dick and Anaugh, he's starting to learn, which brings us to 3) his final dialogue about making a compilation tape. He explains the basics then he says, "I've started to make a tape... in my head... for Laura." And, here's the key: "Full of stuff she likes. Full of stuff that makes her happy. For the first time I can sort of see how that is done."

Or maybe I'm the asshole, now. Mansplaining High Fidelity as if it isn't obvious that Rob is horrible and the point of the film is his obsessions bringing him around to that realization. Hell, maybe that's what I've been doing for 994 days now, offering up unsolicited opinions because I can.