just waiting for somebody to screw with

I was not going to watch The Net again, but yesterday I noticed something... worth discussing.

Here's the thing. Obviously, The Net is an early attempt to fathom the reach of the Internet and what it means to have our information out where anyone can find it if they just know how to hack the right website or database. But, then there's the plot itself--Angela (Sandra Bullock) has her identity erased and is sent on the run. Yesterday, I compared it to The Fugitive, the film version of which came out in 1993 (and I could also compare it to 1995's Nowhere Man TV show).

(On the subject of The Fugitive, by the way, two things: 1) I watched the film just last week on the plane, indirectly. That is, guy in the row in front of me was watching it, and, somewhat familiar with the film, I didn't really need to hear the dialogue again to follow it. Not as good as when I watched Groundhog Day and the earphone splitter wasn't working, so I let my friend Pablo hear the movie and I just said all the dialogue to myself. 1.5) On the return trip, a different guy was watching The Fugitive in the row in front of me. I only half watched it as I was watching Best in Show. 2) I don't get much chance to talk about television in this blog, for obvious reasons--I mean, yeah, there were those TV Time Loop days in year one, and I watched all of Tru Calling and Day Break, but since moving on (mostly) from Groundhog Day, there hasn't been much call for talk of television. Plenty of television in life, of course. But not here.

And, I digress, when I should be getting the hell out of this parenthetical and on with my amazing (and, judging by a quick Google search, unique) interpretation of The Net. I just wanted to say first how it amuses me to this day how the 2000 The Fugitive TV series limped it's way through a single season when CBS promoted the crap out of it, while it's barely promoted companion series, a little show you might have heard of called CSI, took off like crazy.

The plot is simple. The fancy computer tech veneer is quite thick in some scenes and so thin as to not matter at all in others. But, my thought last night was that The Net is really about something else entirely. It's about being diagnosed with AIDS in the 1990s and having your life fall apart. This is only a year after Philadelphia, mind you.

Bear with me. The overt references bookend (sort of) the film. The Undersecretary of Defense Michael Bergstrom (Ken Howard)--

(A quick aside, just as I complained about Benesh (2011) mistaking Buster Greene (Brian Doyle-Murray) in Groundhog Day for the "mayor," I've gotta complain about Wired (Sims, 2013) calling him a "homophobic senator" and Suicide Movies (Stack & Bowman, 2011) calling him the Under Secretary of State... And also "homophobic". [Note later: Devlin actually specifies that Bergstrom was homophobic, which is why they made him think he had AIDS.] They mention his name and title a few times through the film.)

--kills himself after being diagnosed with AIDS. His homophobia (see that last parenthetical for reference) is an important detail. Consider: it's 1995 (earlier when the script was written, of course) and while we should've known better by then, AIDS was still very much a "gay" thing. I remember in 1989, The Ryan White Story being this big deal because here was this innocent kid who had this horrible disease, through no fault of his own, that was supposed to be reserved for deviants and perverts. (Keep in mind, I went to private school and regular church service back then, so the perversion-leads-to-disease angle was probably played up a little extra in my circles.) The Net makes sure we know that Bergstrom is a family man; he talks to his kid on the phone before killing himself. His diagnosis--though it will turn out to have been a deliberate misdiagnosis later--is a shorthanded tragedy to pull us into the story.

Moving forward into the story, we meet Angela, who doesn't have a normal social life, who trades in (computer) viruses and talks to strange men on the internet. Her best friend Dale (Ray McKinnon) is a guy who she's never met in person, and after handing off his latest "virus" to her, he dies. That "virus," in the form of a floppy disk will travel along with her to Mexico, where she meets another man--Devlin (Jeremy Northam)--who is a more literal killer. This is when her identity is erased, and Angela doesn't get to be Angela anymore. Her life is ruined, she has even less of a social life--an impostor has taken over her job and her only contact is her ex therapist/boyfriend, Alan Champion (Dennis Miller)--and wherever she goes, bad things happen. In either case--Dale or Devlin--it is Angela's engagement with a man she doesn't really know (by 1995 standards, anyway) that ruins her life. 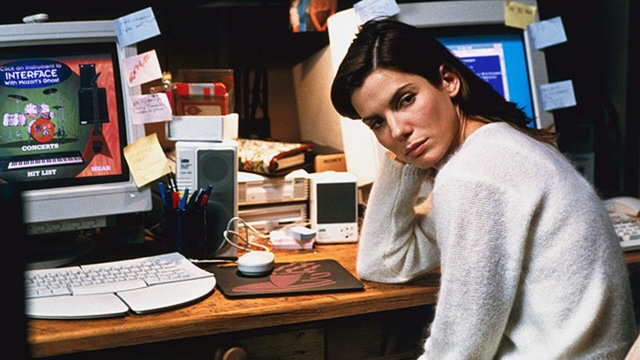 The only friend she's got left is Alan, who she immediately gets to take her to a hotel. He not only goes straight to the minibar in the room, but also suggest they combine drink with prescription drugs. Plus, there's the whole therapist/lover angle; he may be nice, but the movie is clearly presenting him as quite immoral.

In the hotel room, Angela tries to get in touch with the guys from Cyber Chat; the one guy who's online she brings up the pi symbol "virus" and they arrange to meet. Taking the AIDS metaphor, she's got to contact these guys because they're in danger, they might be infected too. She learns that Bergstrom's AIDS diagnosis was wrong and, in dialogue, immediately links her own autopsy (an overt reference to her impending death) to Bergstrom's. Alan is hospitalized (and later dies) because of her. Cyberbob dies because of her.

End of act two, everybody close to her dead, Angela is caught by police while a clichéd Hollywood rain pours down... Cleansing her of responsibility for everything so far, perhaps?

Ruth Marx--the identity forced on Angela--has a history of drug use, prostitution, and has been treated for venereal diseases. This invented identity is a stereotypical risk for contracting AIDS.(She also dropped out of Lincoln High School at 14. I wonder if she knew Nancy Taylor.)

When Angela arrives in San Francisco, one of the first thinks we see is an END AIDS NOW banner. Later, there is a candlelight vigil. Arguably, it's just background, an extra attempt by the filmmakers to be topical, I suppose. But, the metaphor fits.