people are just crazy in this world

Saw The Jungle Book (the "live-action" remake) in the theater today. The CGI animals were awesome, but storywise, is ain't a patch on the animated version. Plus, by not going all in with the musical numbers, the two very brief songs come across as very out of place.

Watched (and livetweeted) The Ouija Experiment just now. Better than I expected it to be, made good use of its minimal budget.

But now, Punch-Drunk Love is on again. And, it occurs to me that the insanity of the opening is a good gauge of Barry's mental state. He's on the phone obsessing about the Healthy Choice/American Airlines promotion, then he wanders outside only to have a car randomly flip over in the street and a cab drop off a harmonium. This is Barry's brain, obsessive and calm one moment then chaos.

And, I don't know if--and this is me going all fan-theory on the film, and I hate fan-theories--the phone sex girl really extorts Barry for money. I think that might just be Barry's guilt over having called a phone sex line in the first place writ into his real world because, again, this is Barry's brain. The job, the overbearing sisters, the percussive soundtrack--this is all just Barry's brain and we're inside it for these 95 minutes.

And, I'm wondering why is there only one panther, one bear, one snake, one tiger, but a pack of wolves? Why don't the elephants talk even though Bagheera reveres them as the creators of the jungle? For that matter, why do none of the primates talk except for King Louie? Why is King Louie unnecessarily large?

Last week there was talk of AMC theatres allowing texting during movies, and first I was horrified because those people annoy the crap out of me when I'm trying to watch a movie. Then, it occurred to me that this meant I could livetweet new movies and that almost made the potential annoyance worth it. Like, I could see the movie at the closer Pacific theatre when I don't want the bother but a bad horror film comes out and I would totally go to AMC and bring my wireless keyboard with me and everything. Then AMC announced it was not going forward with allowing texting and I rejoiced along with all the other complainants.

This movie frames Barry (and later Barry and Lena) in doorframes several times. A little literal on Barry being boxed in.

This is Paul Thomas Anderson's brain, I suppose.

When Anderson announced that his next movie after Magnolia would be an Adam Sandler comedy, the press folks at Cannes thought he was kidding.

This is the journalist's brain.

This is that reviewer's brain.

Or your brain when you're watching the film. That is very much what this film does. I've written before in this blog about how I don't need to enjoy a film to like it. A film doesn't need to make me feel good, per se. (Although, to be fair, a well-made film that makes me feel bad does make me feel good.) That's something I love about this movie. It makes almost no effort to get you to enjoy it. Sure, Barry and Lena turn out to be weird in some similar ways, and potentially compatible despite all the weirdness we've seen from Barry. Like maybe there's a happy ending beyond the rainbow-coloured lining. Which is as close to joy as the film is going to offer.

The good-bye kiss after their date is pretty good too, with Barry getting lost as he tries to get back to her apartment to kiss her. That's funny, and desperate, and then he's there and the joy isn't quite there because Barry's lamenting Lena's coming trip to Hawaii.

Barry's dive roll over that railing when the four brothers are chasing him is pretty funny, too. Barry dancing in the grocery store, too. 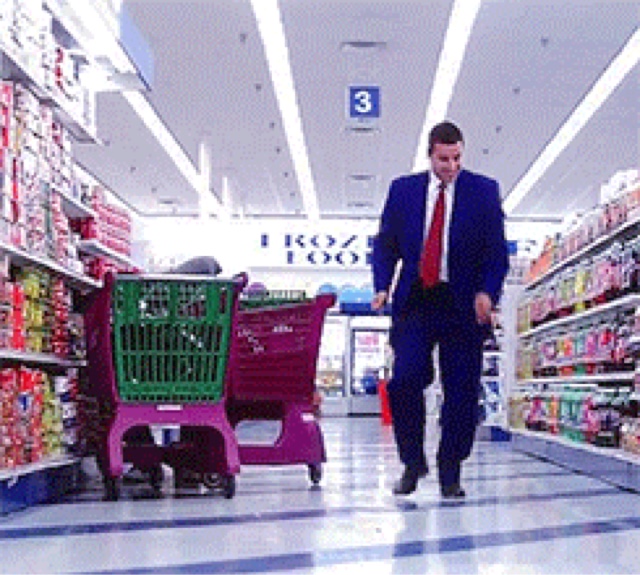 (I wish I could figure out how to include a GIF of that from my phone.)

But, funny is not necessarily joy.

Nor is pain necessarily discomforting.

Not when it comes to movies.