you lived with it for so long 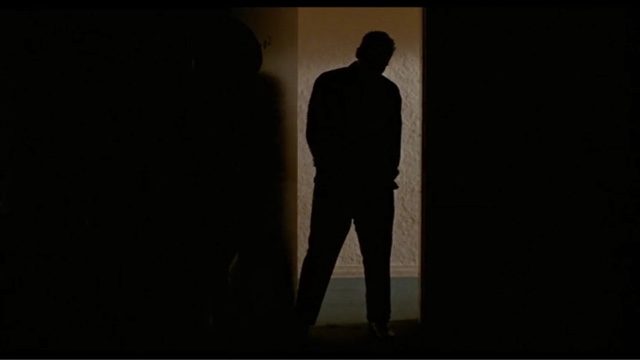 The heart of Swingers is Mike, especially what I've been calling that scene. If you're with this somewhat depressed guy and can make it through that scene--my daughter was in the room the other day when that scene was on, and her "Oh, sweetie, no," was exactly the kind of response we should have--you're rooting for him, rooting for his life to get better. And, that's easy. Mike is not a jerk like Trent or Sue. He's not there to pad the rat packesque group at the center of this movie, like Charles--though his "this place is dead, anyway" is amazing--or Rob--whose useful advice about life for Mike could have come from Trent and maybe worked a little better dramatically, structurally. Instead of the latter, we're barely offered up much that is positive about Trent. Sure, he's trying to get Mike out of his apartment but it's hard most of the time to really see Trent doing that for Mike, rather he's taking advantage--or so it seems some of the time--of the current state of Mike's life to have a wingman to drag out to Vegas--

Seriously, think about act one of this film knowing what you know about the group of friends that populate the second and third acts, especially as they interact in the second. Where is Sue, when Trent's off to Vegas for the night? Where is Charles? Does Trent have any other friends beside these guys? Is Trent really far lonelier than any of the rest of them, even Mike?

But, counter that with the gun scene. Sue goes too far, and when Mike calls him out on it, Sue turns on Mike. I'll assume you're not watching the movie right now--

(Hell, to be honest, I'm not watching it right now. To that question mark a paragraph ago was written a few hours ago, and I won't be watching the film until after our final prep meeting tonight for tomorrow's tournament--more on that in a moment, as this entry should recap a bit of what's gone on this past month in this blog and deal with why I ended with this, rather more positive than the other movies this month movie, but it still needs to be entirely of this moment in this place--so the movie is still not on (but will be soon). (And, that was a convoluted sentence, not that I am against that.))

MIKE: You live in this fucking fantasy world.

SUE: What about you, Mikey? At least I fucking have balls, man. You're always whining about some bitch that left you a year ago.

MIKE: It was six months ago, and she didn't leave me.

There's a bit more, but the relevant section here comes when Trent steps in.

SUE: Have you gotten laid once since you moved out here? Have you fucked once?

TRENT: Alright, Sue, why don't you shut the fuck up?

SUE: No, you know what? I know for a fact that you haven't. You know how I know? Because you never shut up about it. You're like a little whiney bitch--

TRENT: Shut the fuck up, Sue.

Purportedly, that scene happened at Vince Vaughn's request. The main people here--Jon Favreau, Vince Vaughn, Ron Livingston--were friends outside the film as well. Favreau wrote the script based on his own experience and Vaughn and Livingston play versions of themselves. So, maybe Vaughn realized just how much of a self-centered prick he was in the script and 1) to give his alter ego a better side and 2) because no one is just one thing anyway, he asked Favreau to write that scene because that ending puts a nice note on the character of Trent. He sticks up for Mike.

To be fair, now that the movie is playing, Mike isn't the nicest of guys in the opening scene, so it's not like he's an innocent in all of this. Just listen to his diatribe (which might not be 100% accurate to the film; the scene has passed, I don't have time to backtrack this late at night with an early start tomorrow, so this is from the script) about the parties they'll go to:

We're gonna spend half the night driving around the Hills looking for this party and then leaving 'cause it sucks, then we're gonna look for this other party you heard about. But, Trent, all the parties and bars--they all suck. I spend half the night trying to talk to some girl whose eyes are darting around to see if there's someone else she should be talking to. And, it's like I'm supposed to be all happy 'cause she's wearing a backpack. Half of them are nasty skanks who wouldn't be shit if they weren't surrounded by a bunch of drunken, horny assholes. I'm not gonna be one of those assholes. It's fucking depressing. Some skank who isn't half the woman my girlfriend is is gonna front me? It makes me want to puke.

It is also Mike who calls the late night casino "the skank shift." But, mostly, Mike is the good guy, second in that only to Rob (Livingston) and Rob has significantly less screentime.

But, the end of that diatribe from Mike gets me thinking about where I'm trying to go with this blog tonight. It's been a month of films about decaying relationships--

--which has been off-and-on depressing, enlightening, therapeutic and painful for me. Tonight, one of the opening night traditions at AFA got to me because there's this thing in the District meeting where the competitions who are seniors--i.e. this will be their last AFA Nationals--to not only stand up but to say a few words. Nearly every one of them cried, and so did many people around the room, including me. I've been there, seeing the end of something that was so great but had a limited shelf life. (And, I realize that sounds like a potential metaphor for marriage or any romantic relationship, but I swear I didn't mean it that way. But, it makes sense that the meanings would coincide, would twist and turn and be one and the same. The same will be true when (if) I end this blog finally this year.) Forensics--this thing we do (I competed for 3 1/2 years and have now coached for four)--is a lot like this blog very quickly became; it's regular opportunities to have a platform to speak your mind, to perform, to step outside yourself and deeper inside yourself at the same time. And, it is very easy to get attached. Especially if you have stuff to say. When it was my turn to stand up at the district meeting four years ago, I wasn't planning on talking. This year, it seemed requisite that every senior get up and talk, but that year, it felt more voluntary. Folks on my own team were getting up, folks from other teams from our district, and then Jasmine, who's now a fellow grad student and GTA at Cal State LA but then was not on our team, gave a nice speech, felt like a good conclusion to me, and I was relieved.

Then, several people on my team, including Andrew, my debate partner, pointed to me. And, I got up, and I wasn't that emotional yet. I think I was mostly emotion end out a lot of the time that quarter. I had just separated from my wife, would see my kids briefly through the week when I would take them to gymnastics or swimming, and I had been channeling much of that pain into my interp pieces. There was a round at a tournament down in San Diego that winter quarter that I barely remembered but for how much it hurt...

But anyway, my marriage is ending, my forensics career (as a competition, at least) is ending, and my wife of all people sends me a text... I wish I could remember the exact wording. I mean, as much as it pierced whatever facade I was putting on in that moment in that meeting... maybe a couple hours later, it should be stuck in my head. But, fortunately for me in the present, a lot of the most painful stuff goes away. As Rob tells Mike in this movie, sometimes, you miss the pain. But, that's just a hole that you are probably better off leaving behind. Remember it, miss it now and then, but it is good to not have to think about it and feel it every damn day. The gist was this: put aside all of this stuff between us and go out there and just be in the rounds... As people say lately, go live your best life in that competition. And, it wasn't until I was standing there talking, and telling people about that text, that I realized just how much I was going to miss forensics.

Tonight, we had three seniors from our team get up to speak--Marilu, Dorothy, and Lane--and as they spoke, and as seniors from other teams spoke, it got emotional because you make friends, you make family in this activity. (Like any sport, probably, but I know this activity, not that.) It holds you together when other things are not working. It brightens your day. It gives you somewhere to be, people to be with. And, maybe it's the unique thing to this activity--certainly the seniors tonight made it sound like it is, and I'd like to think it is--this activity empowers you. It gives you a voice. It gives you agency when maybe before you didn't know you had any or would ever have any.

Add all that--the seniors tonight getting emotional, me thinking about four years ago doing the same, my marriage broken then, all but gone now but for some finalized paperwork--to one more note: after this tournament, I am no longer a coach for Cal State LA. I'm finishing up my thesis and graduating and, as of right now, I have no idea if I will be able to coach next year someplace else. I hope I can. Forensics is an activity that leaves a mark...

Like any relationship does, like marriage, like a 6-year girlfriend in Mike's case in this movie. Appropriately, as I finish up this entry, he's looking at his old photos, remembering happy times. I'm not one to look at old photos often, but I know that feeling, that looking back. Unlike Mike at this point in the film, I think I'm past the pain, at least regarding my marriage. Like many a forensics coach, though, if you offered me another year as a competitor, or even just one more round, I'd take it. Hell, last year in performance class, I did just that; I performed the same prose piece I had performed in my first year as a competitor, but with a new intro and an added outro because the piece felt different now. It was about a failed marriage and the emotion of the piece was more genuine for me now.

But, why Swingers to end the month, you might ask after more than two thousand words now tonight. Because, like Before Sunrise or Before Sunset without Before Midnight, there's hope. (There's a little hope at the end of Before Midnight, but not like in the previous films in that series.) In the course of this film, Mike goes from a broken man to something more whole. Realistically, he's not all better. But, this is Hollywood. Credits roll and Mike is fine. Mike is going to be fine.

So will all those seniors who spoke in our district meeting (or any of the other district's meetings) tonight. So will we all if we just leave ourselves space to move forward, to stand up, to speak out, to... whatever it is you need to do to feel like a better you.