you shit on the people who know less than you

I've got a theory, one minor part of my master's thesis, that among other things I do in this blog, I reference my knowledge of and experience with other films in order to 1) yeah, increase my credibility when talking about film, 2) obviously, to make my points using basic comparison and contrast, but maybe most importantly, 3) to manipulate the reader into thinking I know what I'm talking about, whether or not I actually do. Admittedly, that's just another way of saying #1, but the thing is, there's a certain clout to just having this blog, maintaining it for hundreds of days, watching movies day in and day out, that suggests to the casual reader that I must know something. #3 is supposed to be a negative version of #1. Like, yeah, I've got plenty of film knowledge, I've seen thousands of films, gotta brag about that from time to time, but I'm still just some blogger, a bit too full of myself sometimes, desperate for attention yet often actively avoiding it.

I offer up specific theater experience, always having to check boxofficemojo.com for the details because I could never organize my movies like Rob Gordon in High Fidelity can organize his albums autobiographically. Not all of them anyway. Coming back to an old reference to another Nick Hornby story--Fever Pitch--I could use movies to tell my life story. Hell I've done it in this blog more than once. You can check out my childhood with Rambo: First Blood Part II, for example. If I ever got around to watching Judge Dredd for this blog, I could share how that Cure song over the end credits really worked for my back in 1995 when I was working at the UA Marketplace theatre in Old Town Pasadena. Or, if I ever watched Valentine or The Mummy Returns, I could talk about how I only saw two movies (those two) in the theater in the three months that I lived in Arkansas and saw none in the two months I lived in Tennessee. Movies, I think, are one of the California things, the Southern California things, the LA things stuck in my blood from living here for the rest of my four decades.

(For the record, the weekend High Fidelity came out, it was #4 at the box office. I saw it that weekend. I had just read the book. And, I think I could relate even more to Rob Gordon back then than I can now because I was in a serious funk, activating my long-term depression, after my first romantic relationship had ended. Erin Brockovich was #1 in its third week, and I had seen that its opening weekend (at the underground). American Beauty was still in theatres, its 29th week, and it was #6. I'd seen that one a good 28 weeks earlier. The first Final Destination was #7 in its third week. I assume I saw both that and Erin Brockovich that weekend two weeks earlier. Movies still worked for me--that old escapism thing. The previous summer was recordsetting for me, mostly because I had a crush on a girl who worked at the diner next to the underground.)

And, what does that parenthetical really add to a discussion of movies? I mean, if you're just like me, you can relate, you can know you're not a total lunatic. But otherwise... What about the reader who gets here by chance, a google search for High Fidelity, maybe looking for a review, but I, of course, don't write reviews.

Which is just another bullshit line I use so that I can ramble about whatever I want. I write reviews sometimes. I write pretty damn good reviews. Like my review here in this blog of The Danish Girl, or my review in my other, less regular blog, of Whiplash or Inside Out. I mean, compare that last one to when I talked about Inside Out here in this blog. It's different. And, I could probably benefit from restricting my approach to reviews, give myself a leash, a straitjacket. Rein myself in so I don't just ramble about whatever the fuck I want to that day with the surface excuse that it is somehow related to the film I happen to have chosen to watch. 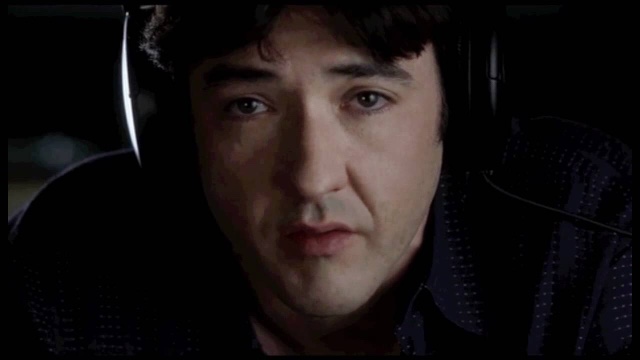 Oh, and this is me cheating:

(And, if I quote any of this entry in my master's thesis, the funny thing is that I will also quote that line just now about cheating. Autoethnography is fun.)

I've spent 995 days now (minus the few entries that rather sucked because I was sick or exhausted or busy or had nothing exciting to say) using this blog for therapy, for disguised exhibitionism, to be a braggart and a know-it-all, and as it went to maybe figure out a way to do something fun like this for a living. And, I never did that last one very well. It was just Rob Gordon wanting to be an architect. (Not that the dream has died, just that I've never been good at dreams.)

See, blogging in the age when everyone is online in some way, and you've got, as I call them in my thesis, "140-character bon mots" on Twitter, for example, to compete with, is a strange beast. On the one hand, you've got as many words as you want, plus images, videos, whatever, and the topic is anything and everything, and all of it is twisted up in you. On the other hand, the more words you write in your blog, the less readership you can expect, and that gets all twisted up inside you as well. Twisted up like Scrooge's "undigested bit of beef."

(An aside, because I just noticed it. I talked about when Dick meets Anaugh yesterday and I just noticed the specific visual that lines up next to this fresh new couple: Rob is serving a customer and that customer is a blonde in a leather jacket, just like Laura that night Rob first met her. The contrast seems deliberate but it's so brief as to go unnoticed.)

Blogging ends up being this strange combination of metanarrative (like a journal or diary) and public exhibition. A place to exorcise personal demons and re-create your self. For the casual reader, and even some of the regulars, I am just who I say I am. If I avoided entries like this one that get into real detail about the real me, then I could be whoever I want to be. At least online. And, nowadays, online can be everything.

And, I use this space to talk about movies because 1) movies deserve to be talked about, 2) life can be measured in movies and movies in life (the Groundhog Day Project motto), and 3) I like thinking of myself as someone who knows about that kind of thing. It's selfish even when I try to make it selfless.

But, there are so damn many of you.