another step in the cycle of life

So, Phil is a bodhisattva. In Buddhism, the bodhisattva is a human (sattva) who has achieved enlightenment (bodhi) and now carries out altruistic acts. Unless one wants to argue that Phil is still selfish at the end of the time loop, then whether we take the film as a Buddhist treatise or not, Phil still qualifies under the umbrella of the bodhisattva. 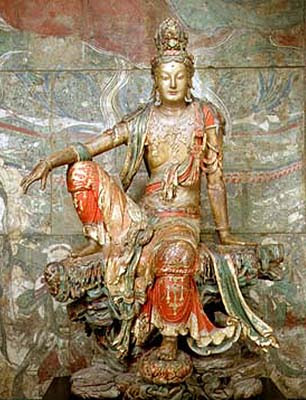 Soka Gakkai International tells us, "Compassion, an empathetic sharing of the sufferings of others, is the bodhisattva's greatest characteristic." Phil demonstrates his compassion even before we see him attempting to save O'Reilly or performing any of his good deeds on the last resumption of the time loop. His inspirational interaction with Chubby Man, his bringing pastries for Larry and Rita--these are already signs that Phil has learned to have compassion where before he would make fun of someone before he's ever consider trying to relate in any genuine fashion. Mrs. Lancaster is nothing but nice to Phil but he makes fun of her on Day 1 for no real reason other than he can. He doesn't recognize Ned but belittles him--"Did you turn pro with that belly button thing," he asks him, diminishing not only Ned's high school talent show performance but his current career which Phil doesn't even know yet in one fell swoop.

Phil still has his wit on the last resumption, but he doesn't use it to ridicule anyone. He still pokes a little fun--"he was trying to swallow a whole cow" is hardly a polite line, but there's something of the familiarity of family in the delivery--and he still deflects and delays with his jokes--the line about putting cherry syrup on his ice sculpture, which really works to ridicule himself if anyone.

Another notable change can be seen with Debbie and Fred. On god day, Phil demonstrates that he knows what's going on with them--that Debbie is having second thoughts about getting married--but then he moves on to demonstrate more of his special knowledge. He's almost callous about it, really, if you pay close attention to the god scene as it keeps going. As Phil tells Rita about Bill and Gus and Tom and Alice and Nancy, Fred can be seen in the background getting increasingly upset as he talks to Debbie. Of course, even after Phil is past god day and on the road to being better, he gets that piano student kicked out of her lesson, so he's not perfect. But, a bodhisattva doesn't need to be perfect.

Interestingly, though, since I have already made the case for Phil as Christ-Figure, the case has also been made that Jesus Christ was a bodhisattva. Particularly, I'd cite a 1911 lecture by Rudolf Steiner entitled "Buddha and Christ: The Sphere of the Bodhisattva." Steiner references Jeshu ben Pendira who a rather convoluted paper suggests is the historical Jesus as a bodhisattva. A notable piece of Steiner's lecture (and one section that gives me pause for a reason I'll get to below) is the following:

In our period of evolution, two streams of spiritual life are at work; one of them is the stream of Wisdom, or the Buddha-stream, containing the most sublime teaching of wisdom, goodness of heart and peace on Earth. To enable this teaching of Buddha to permeate the hearts of all men, the Christ Impulse is indispensable. The second stream is the Christ-stream itself which will lead humanity from intellectuality, by way of aesthetic feeling and insight, to morality. And the greatest Teacher of the Christ Impulse will in all ages be the successor of that Bodhisattva who incarnates again and again and who, in three thousand years from now, will become the Maitreya Buddha. For the statement contained in Oriental chronicles is true: that exactly five thousand years after Gautama Buddha attained Enlightenment under the Bodhi tree, the Maitreya Buddha will incarnate on Earth for the last time.

I think it's safe to say that Steiner, if he were still alive, would see that Christ Impulse in Phil Connors. And, Phil, it is safe to say, is living in line with both the Buddha-stream and the Christ-stream in the latter days of the time loop (i.e. act three).

My problem with a lot of this bodhisattva stuff, and that passage above in particular, is that it's an example of a relatively un-supernatural religion--Buddhism--at its most supernatural. The idea of a bodhisattva, an enlightened guy who does good for others--that's something I can not only understand but also try to relate to because I would love to do good for others whenever possible if, well, I weren't so often distracted by the trappings of modernism. But, you get into the reincarnation stuff and prophecy and it plays more like fiction.

Not that I, obviously, have any problem with fiction.

It also gets a little confusing when I'm reading Steiner's lecture and thinking (as I've suggested above) that he's saying the Biblical Christ was a bodhisattva, and then I get to the following:

The succession of Bodhisattvas and Buddhas has no relation as such to the cosmic Being we call Christ; it was a Bodhisattva — not the Christ — who incarnated in the body of Jeshu ben Pandira. Christ incarnated in a physical body once, and once only, for a period of three years. The Bodhisattva appears in every century until his existence as Maitreya Buddha.

Taking Jewish tradition, Christian tradition and Buddhist tradition here, I see this as saying Jeshu ben Pandira was a bodhisattva but he was not the Biblical Jesus. Except, the whole point to the stuff about Jeshu ben Pandira is to explain away where the Christians got a lot of their Jesus story. So, either Jeshu was part of a line of bodhisattvas (even though lineage is not necessary to be a bodhisattva) or he was the son of God.

Or they're all fictional constructs anyway and my equating each of them in some fashion to Phil Connors is not only valid but just as meaningful. I think I've mentioned before an idea I had for a t-shirt since starting The Groundhog Day project: PHIL CONNORS DIED FOR YOU.

(I also recently, prompted by my son, have wondered about getting rubber bracelets that have WWPCD etched into them.)

The thing is, on the one hand it's obviously a joke, and a deliberately provocative one at that. On the other hand, if any of us learn anything about how to be better people after watching Groundhog Day, or if we've even just been entertained in the 100 minutes or so it takes to watch the film, then Phil Connors has died for us. He has died for you.

I wrote a screenplay about a decade ago called Fugue. In it, the protagonist, alternatively known as Persy or Leandress depending on which world she's in, Earth or Bas, suffers a great deal for a cause she doesn't understand. Ultimately--and huge SPOILER follows, not that any of you will be seeing a copy of my screenplay or a film made therefrom anytime soon--Persy realizes that she is the victim not of her circumstance in the fictional world of Bas or the "real world" of Earth but in the cinematic realm of the movie we're watching her in. In the end, she strips off her clothes to show the wounds she has suffered for the sake of a story for the audience and she proceeds (or maybe the stripping comes after; it's been awhile since I've looked at the piece) to climb onto a chair so she can reach the top corner of the screen framed around her and tears down the film around her. Then, left in the empty space that remains with the movie around her torn away, she gives a brief sort of speech then turns and leaves, rejecting the audience and what we have put her through.

I say all that to point out that I take fiction seriously. And, I understand that inside each story there should be a reason for suffering, a reason for pain, and a motivation for what characters do in response. But, I also believe that fundamentally, a lot of what characters go through comes down to choices made by a writer typing away like I'm doing now.

(Not to exclude those who write longhand or those who predate typewriters or computers, of course.)

And, after over 100 days of watching Groundhog Day and pulling out of it so many layers of meaning, I would be remiss if I didn't say that the film is trying to tell us something about who we are and how we are when we are selfish and how we can be when we are not. I would be remiss if I did not value Phil Connors as more than just a character in a film from twenty years ago. When I came up with that t-shirt idea, it was meant purely as a joke, one that might provoke or offend but that should still be funny. I think it makes as much sense to me now, though, as a shirt that says JESUS DIED FOR YOU.

Today's reason to repeat a day forever: to see how many other religious figures I can reduce to fictional terms so as to equate them with Phil Connors.