Backtracking just slightly, I can't believe I neglected to mention, in regard to #24 ("verbal tags") yesterday, that Ned also says, "Oh God! It is so good to see you."

Foretracking back into the present--no, foretracking isn't a word, but it should be--I just watched Time Freak (2011) again. It's an Oscar-nominated short about Stillman, a guy with a time machine who has spent 3 days (real time) and year and a half (his time) going back in time to yesterday. Just yesterday. See, he had a run in with the dry cleaner because the shirt he planned to wear for photos in Ancient Rome wasn't ready. So, he went back to try it again, and again, and again. He tells his friend he was just trying to change his reaction to the situation. Since you probably won't ever see the film unless you find me and ask me to show it to you or you buy a copy yourself on iTunes, I'm going to get right into SPOILERS.

He ultimately (that time) ends up hugging the dry cleaner instead of fighting with him because "it's only a shirt." But, then he runs into the girl he likes and while they have a cute bit of interaction at first, the conversation gets awkward, so he travels back to do it again, and again, and again... in explaining it, he tells his friend that "after a few hundred tries, Debbie and I had a meaningful conversation." But, then Debbie convinces him that he should stand up to the dry cleaner so he heads back there again.

The movie isn't long so there's not a lot more to it. But, out of only a handful of threads on IMDb about the short, at least two of them mention Groundhog Day.

(For the record, I saw Time Freak back when it was nominated for the Oscar because I get obsessive about the Oscars. Hard to believe, I'm sure.)

Anyway, there's a great line--that also reminds me of the movie Primer which I might need to watch again for this blog--about having conversations that Phil Connors would surely understand. Stillman tells his friend:

Conversations tend to get pretty awkward after you've had them twenty-five times. It takes a lot of work just to get 'em back to normal.

But, more important than Time Freak is this: somehow I never looked up Andie MacDowell on IMDb in the three months I've been doing this project so far. I suppose I would have gotten to her eventually, but in my actor profiles--which I still hope to get to at some point--I was starting with the obvious Bill Murray, and I was going to watch a bunch of Bill Murray movies, other than Groundhog Day and blog about them and him and, well, whatever goes in an actor profile. For the record, I have managed to squeeze in only the original Ghostbusters so far. So, Andie MacDowell, Chris Elliott, Stephen Tobolowsky, etc. will have to wait. But, anyway, my son asked how old Phil Connors was tonight and I told him Bill Murray was about 42 when they filmed Groundhog Day. Then, he asks how old Rita is and I look up MacDowell and learn a shocking piece of information. 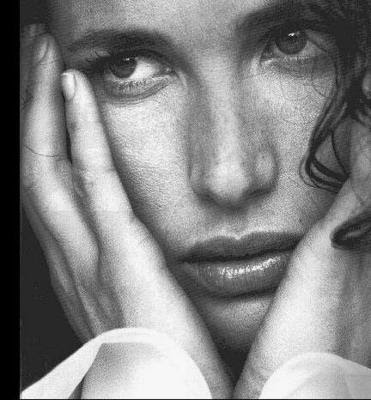 But, let's backtrack slightly first. See, My son and I had just been discussing the film as romantic comedy and how, in the immortal words of Larry the Camera Man, "there is a heck of a lot more to it than just that." I started to explain my theory about why Phil was dressed like a cowboy and Laraine was dressed like a French Maid and as I look up Andie MacDowell, my son references her name in relation to the whole gender thing. But, that's not the big thing. See, Andie is short for Anderson, which would be really weird if that were her first name. But, it's her middle name. And, her first name is Rosalie.

Imagine a big dramatic drumbeat or gong or something, and my sister who reads this blog regularly and maybe a couple other people will get why that's a big deal. And, don't worry, I will clue the rest of you in as soon as this particular sentence has ended. Rosalie is my mother's name. So, then my daughter asks if Rita and Phil are my parents. Without a pause, I tell her yes, since they got together in 1993 and that's when I graduated high school, that makes them my parents. I explained further (when she realized that made no sense) that they were the parents of my adult self, spiritually. I think that made enough sense for her.

Now, I must look up Bill Murray again to see if by chance his name is Robert William Murray (Robert being not only my name but also my father's; you people are going to have to do a better job of keeping up.)... It's not. His name is, according to Wikipedia which we can trust completely, William James "BillFreaking Murray. I'm guessing that " is some sort of glottal stop.

Anyway, I had intended to write about the Christ- or Messiah-Complex to complement the last two days of writing about Phil as Christ-figure, but finding a list of symptoms on short notice proved... well, not difficult, but the two sources I found pretty easily proved to not really be about what I thought they were about.

Today's reason to repeat a day forever: to make conversations so awkward they circle back around to normal... which is probably what I do quite often in real time.