and sees his shadow

Just noticed and my mind is blown by: opening scene, Phil says he's "gonna go out on a limb" then at the end of the time loop, he saves a kid who has literally gone out on a limb...

Ok, my mind wasn't really blown. But, hey, if there are more examples like that, I could certainly make an argument about the mirrored structure.

In other news, a mistake--or just evidence that Phil is a fantastic performer: the news footage showing in the newsvan at the beginning of the date night sequence-- 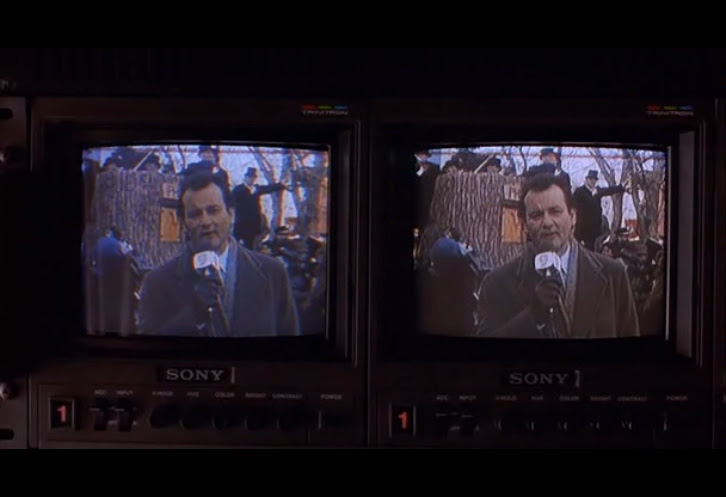 --is the same footage shown on Day 1. 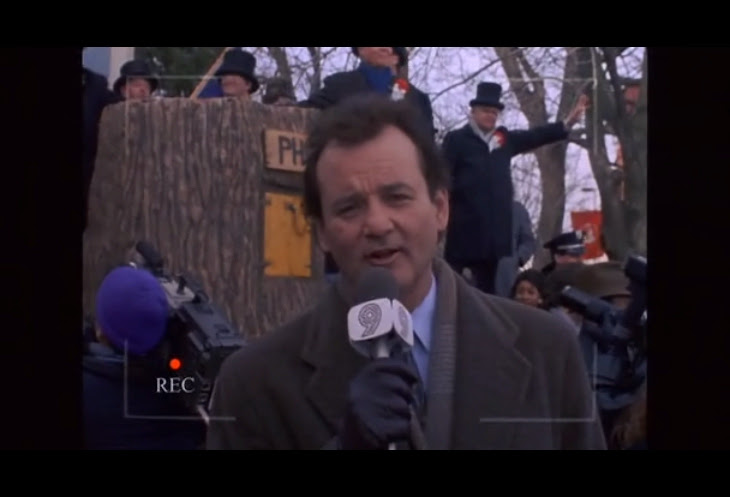 But, that's not what I want to talk about today. Today's business:

Phil Connors may be a Christ-Figure, but that doesn't mean he's nothing else. I've spent plenty of time talking about other things Phil represents of course. Today, I wanted to get started down the road to the Bodhisattva, even though I've got a binder of articles on cinematic Christ-Figures and a paper I could be drafting about that very topic. In particular, before I can even get Phil to the role of Bodhisattva, I've got to deal with a little bit of Phil as Siddhartha Gautama. In particular...

Hold on, got to interrupt. I've been considering for the purpose of my upcoming paper either or both of Phil's cold showers represent his baptism--the John the Baptist figure along with baptism is one of Kozlovic's 25 elements of the Christ-Figure--but I just came up with a much clearer baptism for Phil. Out in the snow, having gotten out of the van to top to the state trooper, Phil is told, "you've got that moisture on your head."

So, one of the things that changed the life of Siddhartha Gautama on his path to becoming the Buddha was what's known as the four sights. Siddhartha comes from a rich family, so his experience is limited. Phil Connors also lives a privileged sort of life off in Pittsburgh. So, out on the road one day, Siddhartha comes upon an old man. On his way to Gobbler's Knob, Phil Connors passes O'Reilly probably every morning (pastry day, not to mention other days we don't see in the film, he might take a different route). Siddhartha has to have the concept of old age explained to him. I'm sure Phil doesn't need it explained, but he also doesn't really pay any attention to the old man when the time loop is new. It's not until after date night and the depression that Phil finally gives O'Reilly money.

The second sight is not an old man but a sick man. The Siddhartha version involves a man covered in sores, if I remember it correctly, but for Phil, this correlates with finding O'Reilly in the alleyway, cold and alone.

The third sight follows soon thereafter, a dying man. For Phil, it follows immediately after, at the hospital where he--but, notably not we the audience--see's O'Reilly's dead body in the hospital bed. The third sight is when Siddhartha learns about mortality. On some objective level, Phil knows about mortality, but maybe he hasn't experienced death on a personal level (not counting his own death, of course).

Another interruption. I mentioned in a recent entry that Andie MacDowell's name is actually Rosalie Anderson MacDowell. Well, the brand of rocky road ice cream Phil presses to his cheek after Rita slaps him is Anderson's. Coincidence? Well, maybe--

(My son compared some of what I do watching this movie now to the crazy people that made Room 237. I take that as damning with faint praise.)

--or maybe the prop person thought it was funny. In the universe of the film, it doesn't mean anything, so I'm not that interested... yet.

But, back to the future Buddha. Siddhartha gets to wondering about life, like how do people live life in the face of these three sights--old age, sickness, and death? And, then came the fourth sight, and here's where Phil Connors departs from Siddhartha Gautama. Siddhartha sees a peaceful man, a guy who had given up his worldly possessions to be happy (like Siddhartha (not the same guy) in Hesse's novel). Siddhartha then leaves his wife and son to go figure out life's meaning. I remember one description of the fourth sight that I read someplace being that it's specifically an enlightened man, and I don't think Phil sees an enlightened man, or even necessarily a poor man, at least not after O'Reilly's death. In the film, we go from O'Reilly's death in the alley to the final day of the time loop. But, I would argue that Phil himself takes that step that Siddhartha Gautama took. Maybe I could put Rita on god day in the role of that peaceful figure that inspires Phil; that would put the four sights a little out of order, but they'd still be there. Except, I don't think Rita knows the meaning of life. I think she's just doing what she wants to do--working in television even though that's not where she started off in college--and so she's relatively content. For Phil, though, as discontented as he is with his empty pre-loop life, Rita is certainly a dramatically different kind of person than what he's probably used to.

Four sights behind him, Phil, like Siddhartha Gautama, sets out not to figure out what life means but to do something better with the life he has nonetheless. One of the oft specified bits of Siddhartha's purpose in setting out was to figure out an end to pain, and end to misery. Phil certainly does this in the latter days of the time loop. And, the final resumption is all about reducing the misery and pain around him. He doesn't just save lives, he makes lives better in little ways as well. The single scene that most exemplifies Phil's new purpose is when he enters the restaurant, saves Buster from choking then lights a woman's cigarette. I've suggested that the conflation of these two acts as being worthy of his time might be an indicator of Phil being insane, but this could also be taken as Phil doing anything and everything to make every life better. If he had been in the time loop even longer, he would be not only lighting cigarettes and changing tires but tying shoes and carrying groceries. He'd be helping everyone in Punxsutawney if he could.

In other news, and because I'm pretty much done comparing Phil to Siddhartha Gautama with the four sights--though beware the implications in future entries--my daughter had a few questions for me tonight about this blog; she's writing about it for her journalism class. In the immortal words of another Bill Murray character, "I've got that going for me."

Anyway, today's reason to repeat a day forever: to not leave my family like Siddhartha but to stay with them and appreciate them forever... or some less cheesy way of saying the same.