In their essay, “Terminators, Monkeys and Mass Culture," Dimitrakaki and Tsiantis give us a slightly different take on Phil’s experience than Daughton’s (1996) notion that “Phil’s situation… parallels that of the economically disenfranchised, the Other”; Dimitrakaki and Tsiantis tell us “what comes under attack” in the film “is a particular manifestation of cyclical temporality that actually exists in capitalist societies.”

One essay’s take on the “cyclical temporality” implicit in Ralph’s line, “That about sums it up for me” matches up with another’s take on Phil’s trap linking to him the disenfranchised, which arguably includes Ralph. That “arguably” of mine is a key point where many might disagree, though. Usually, we would only use “economically disenfranchised” to describe people living, say, below the poverty line, people without many options in their lives, people stuck… well, see, I’m already blurring the definition just enough to be sure I can include the likes of Ralph, with whatever day-to-day job he’s got. But, that’s not quite what Dimitrikaki and Tsiantis write about, though; instead they use this specific interpretation of meaning in Groundhog Day to make a larger point about the representation of time in science fiction films.

(They also suggest that, despite being included in The Aurum Film Encyclopedia of Science Fiction, that Groundhog Day really shouldn’t be considered a science fiction film because “the different experience of time is not linked to technology and the machine… but to memory and consciousness.” I take this to mean—and I would agree…

(Because, agreeing with my own interpretation of something is a trick I learned doing impromptu speeches. Of course, to be fair, I don’t think this is a much of a stretch from what Dimitrikaki and Tsiantis are saying.)

I take this to mean that Groundhog Day is a fantasy film. And, really, I see the film as a comedy first, a fantasy second, and, reluctantly, a romantic comedy third. Underneath all these genres, the film is really a psychological journey or whatever you want to call it, and I think I’ve argued before that it relates to the male melodrama films of the 1950s. But, the reason all of this other stuff works, the reason we accept the time loop conceit, is because the film is funny. It’s Mary Poppins’ “spoonful of sugar” teaching us a few lessons about how we might approach life.)

Groundhog Day only comes in at the end of their piece, but Dimitrikaki and Tsiantis use it as a sort of anchor to what’s come before, a lot more straightforward time travel pieces--Time Cop, Terminator and 12 Monkeys for example. This position gives Groundhog Day the honor of proving “the centrality of time and the problematization of its construction in science fiction films.”

And, speaking of time, I think I’ve solved the reason there’s so much blue in Groundhog Day. But, first those two “continuity errors” I mentioned yesterday. And, I put “continuity errors” in quotation marks because the following argument will prove that these two “mistakes” may be entirely on purpose, there to clue us in to the hidden story beneath the surface of Groundhog Day. First this: This is Day 1, and no you shouldn’t be looking at Phil or Ned or O'Reilly but the kid I call Blueboy. This next image is from the very next shot. Blueboy has almost instantaneously jumped at least a dozen and maybe more like 20 feet. Then, there’s this one from Day 2: 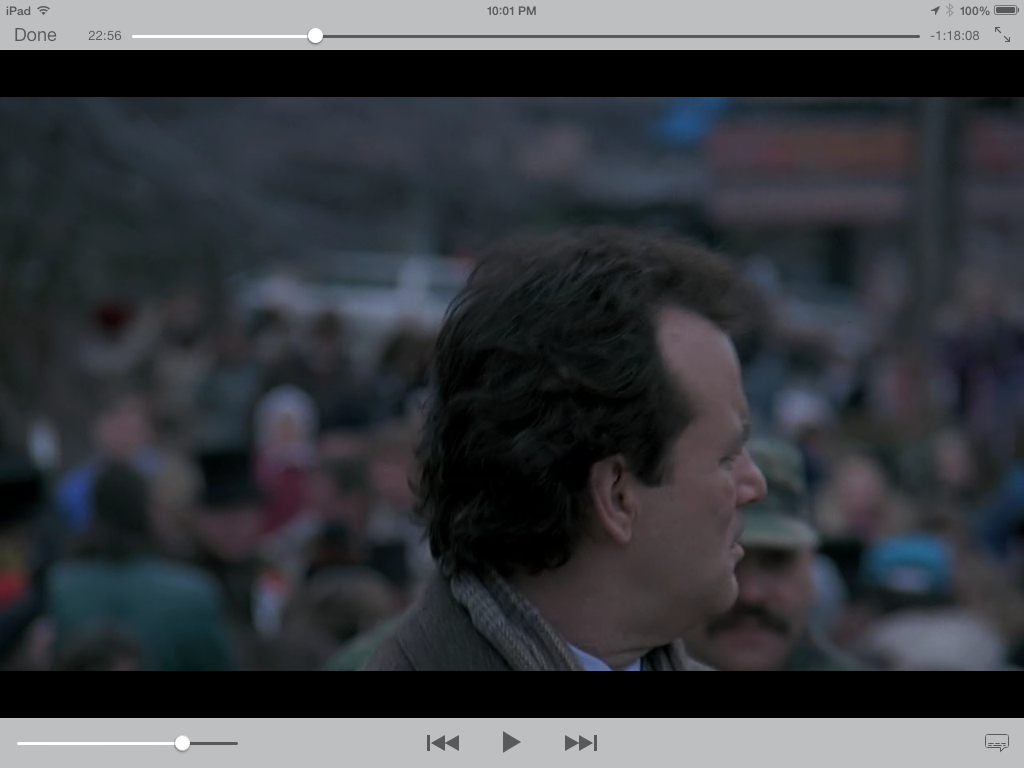 Again, look past Phil, note the soldier with the mustache. And, from the very next shot: Like Blueboy, Stache Soldier has jumped almost instantaneously from walking behind Phil to being ahead of him. The Soldier isn’t wearing blue, unlike so many people in the film. But, still, I think of blue things associated with time and one thing comes to mind immediately: For those of you who don’t recognize that thing, it’s the TARDIS from Doctor Who. TARDIS stands for Time And Relative Dimension In Space and it’s a time (and space) machine.

And, there’s a few particular Doctor Who details that are important to know here: