A note before I get down to business for today, though part of this deserves its own entry later:

First, an explanation. I still haven't purchased a blu-ray copy of Groundhog Day but I went ahead and replaced the copy I've got on my iPad with the HD version available on iTunes. Proceeded to watch the movie in an entirely appropriate non-linear fashion tonight. Had the DVD playing on the TV and on the iPad I started about 10 minutes ahead but was pausing and grabbing screencaps (not my usual method but my desktop computer hadn't loaded the HD version yet), occasionally backing up to get something I'd missed, and pausing to make sure I'd catch certain lines a second time as the DVD copy caught up. By the end, I'd paused so many times--over 150 screencaps--the DVD copy actually finished about 10 or 15 minutes before the iPad copy. But, anyway, I've got a whole lot of good screencaps now to deal with a piece about extras I've been meaning to get to, that piece about race I keep promising, a piece related to Doctor Who and probably a few more. I can finally track the car chase a little better, for example--which will be useful when I get to Woodstock in February, and I do really have to go now because a member of the Woodstock Groundhog Day Committee got back to me about attending the symposium on Groundhog Day on Groundhog Day, held at the opera house (aka the Pennsylvanian Hotel). I've also got some good shots for when I finally start profiling actors or lesser characters than Phil or Rita.)

I noticed an amazing juxtaposition that lends itself to a whole new philosophical and moral debate about suicide as presented in Groundhog Day. Have a look at this image and note the banner on the wall behind the nice family having breakfast. If you can't read it at the size here, it says "unselfishness." And, in case you don't recognize the scene, the lights are about to flicker as Phil, in the bathroom upstairs, kills himself. One of the more interesting things I noticed with an even clearer copy of the film. But, that's not what I want to talk about today...

Now, the business: I must humbly apologize (and blame the old blurry copy of the movie I was working off of before) for a mistake in my entry about tarot cards. Capturing a new image of the playing cards and the hat, I noticed something I hadn't noticed before. 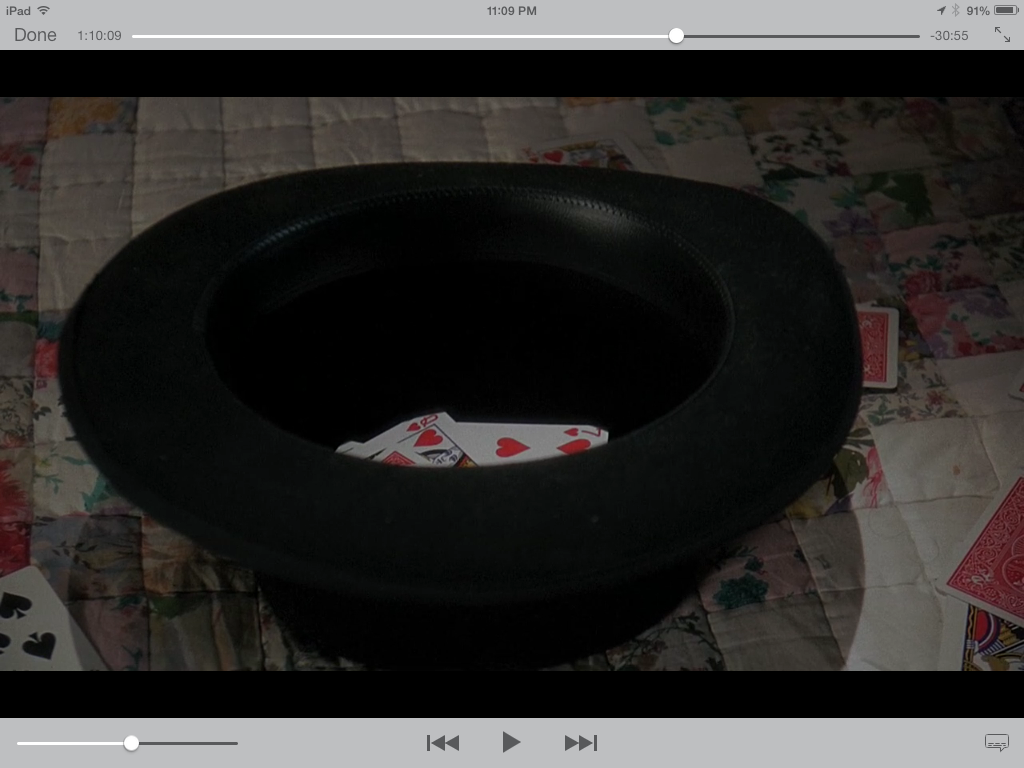 Before, I only noticed 4 cards face-up--and specifically wrote in Day 71 that, "out of all the playing cards we see when Rita's attempting to learn to throw them into a hat, there are only four cards face up"--and the two outside the hat took some pausing and extrapolating from incomplete images. Thing is, there's a fifth card showing just above the hat. Aside from not having as clear an image, I don't think I even thought to look above the hat. So, while we had the Eight of Spades (in Tarot, Swords) on the left, the Jack of Diamonds (in Tarot, Page of Coins/Pentacles) on the right, and in the hat the Queen of Hearts (Cups) on top of the Seven of Hearts.

You can read about those four cards in that Day 71 entry. The fifth card is the King of Hearts (Cups): 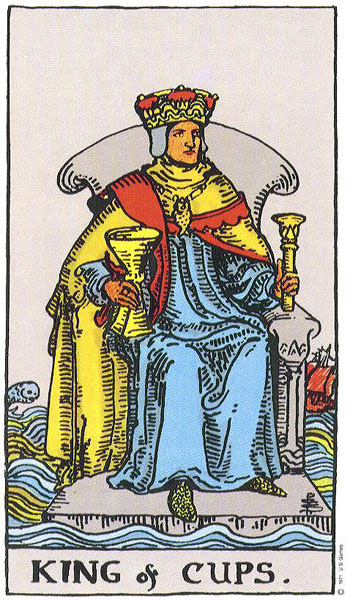 Similar to the Queen, he sits on his throne, there's water about. His necklace has a fish on it, and there's a fish jumping in the background on the left, a ship sailing on the right. And, if we assume that this cup instead of the fancier cup on the Queen's card--a lesson we should take from Indiana Jones and the Last Crusade--is the holy grail, there's a great deal of Christ imagery going on here. And, I've already linked Phil with Christ (and denied his search for God, but there's nothing wrong with a little contradiction from time to time; just ask Protagoras). Before I get into the less religious interpretation, here's how Biddy Tarot describes the card:

The King of Cups sits on his throne on a grey stone block, calmly in the midst of a turbulent sea and wears a necklace with a fish amulet. The fish is the symbol of spirit and creativity and represents the balance of the unconscious with the conscious. Behind him on his right, another fish jumps wildly from the tumultuous ocean, and, on his left, a ship sails steadily in the choppy ocean. These images are a sign that the unconscious has been allowed to break through and has been recognised by the King, yet it remains within his power and does not overwhelm him. The King of Cups does not repress his emotions and unconscious impulses but has learned to accept and deal with them in a mature and balanced manner.

...the King of Cups indicates that you feel very emotionally balanced and in control. You have a very deep understanding of your feelings and emotions, and are able to connect with this when necessary. As you deal with some of the scenarios that life throws at you, draw on this deep emotional maturity to help you navigate these challenges. Also, know that this is an incredible gift you have and be open to sharing your emotional stability and calm approach with others.

I've said the Seven of Cups represents Phil, faced with important choices in how he will take his life. I've said the Page of Pentacles represents Phil stuck on material things, in the natural world but not seeing it. I've said the Eight of Swords represents Phil having a way out even if he can't quite see it yet. I think, now, this King could easily represent Phil here on "god" day and beyond, with a far better grasp on not only his emotions but perhaps his very identity. And, like that second bit from Biddy Tarot suggests the card means in a reading, Phil, I think, shares his stability with the people of Punxsutawney with his good deeds. And, just watch him during the auction bidding and you'll see a Phil who's calm puts him slightly above the action.

There's also something Christlike there, I suppose, looking at the people around you, maybe even below you but not really looking down at them. Phil definitely doesn't look down at the people of Punxsutawney anymore; they are not longer just "hicks" but real people who he has come to know and care about. Phil is that King (or maybe even a representation of the Christ--there, I said it), recognizing the "unconscious" that has broken through but not overwhelmed by it. He has learned to accept his impulses, good and bad--he does still makes jokes, for example, when dealing with Buster's choking--and he has certainly matured.

Of course, I think I've just opened up a new debate in my head; is Phil a Christ-figure or a figure with a Christ-complex? I mean, maybe his savior ways are just the latest in a long line of ways to deal with the predicament of being in the time loop. It's certainly something positive, but does the film really give us enough information to say for sure that Phil is doing good for the sake of doing good? Or is that as much a presumption as when people say he's driven by his love for Rita?

Today's reason to repeat a day forever: to research some of the religions I don't know so much about to compare them also to Groundhog Day.

(Yes, if I was repeating a day forever right now, I would still be working on this project, watching Groundhog Day. Unfortunately, there would be no way to make sure all of my entries I write inside the loop survive beyond the loop. But, damn it, that entry I write on the last day of the loop would be amazing.)