along the side of your life

It's strange that Jonathan Safran Foer (Elijah Wood) is almost a cypher in his own story. He drives the plot, sure but he is not really changed by anything here... well, not very much. There is, arguably a change in that at the end of the film he not only makes a bag for someone else (Grandfather) but also empties his own bag of dirt from Trachimbrod onto his own grandfather's grave. (We don't actually see this happen, but the film cuts from the dirt in Jonathan's hand to dirt in Alex's hand at Grandfather's funeral, implying that Jonathan will let that dirt go.) He changes enough to give up an item from his collection to connect these two men. (To be fair, we have no particular reason other than presumption to think he has not given up an item before.)

The emotional beats in the story belong to Alex (Eugene Hutz) and Grandfather (Boris Leskin) and Lista (Laryssa Lauret).

They don't belong to Jonathan. He is an empty vessel. Storywise, and also character-wise; his need to collection items linked to his family, to bag them and catalog them--there has got to be a hole he is trying to fill, as the common parlance goes. Other than this need, he is little more than a string of punchlines and guesses, much like Alex. but, Alex is more expressive, and Alex has the emotional link to the ending of the story. SPOILERS ahead. Alex is the one who has lost his grandfather to suicide. Jonathan might as well be Kevin, Elijah Wood's character in Sin City, as inexpressive as he is most of the time. Also, he's got those glasses. Roger Ebert, in his review of the film, calls the "oversized eyeglasses so thick they make his eyes huge" a "distraction." 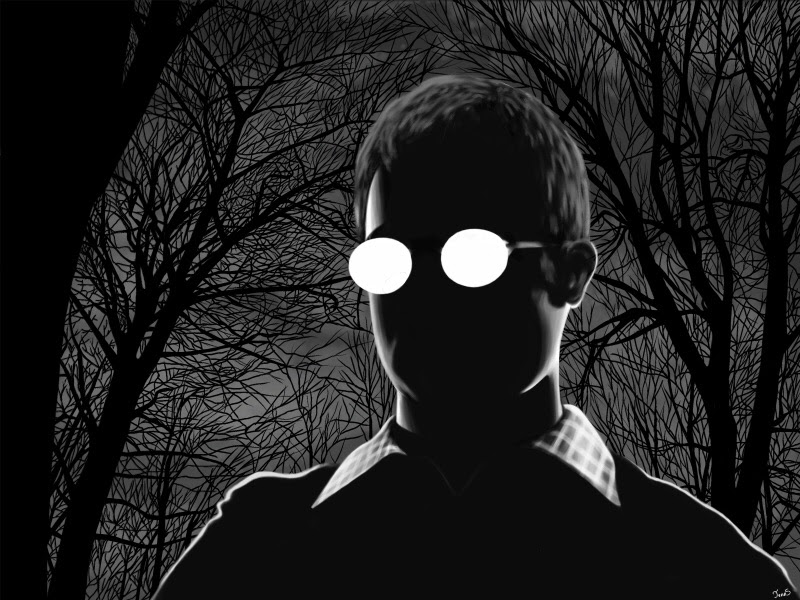 But, like Kevin's glasses, Jonathan's make him who he is for us. His eyes are big because he is on the "rigid search"--he is looking for something. But, his prescription is so strong because he really cannot see it. Not on his own, anyway. In fact, the moment it really becomes clear that Lista will be useful, that she really knew Safran and Augustine, she removes Jonathan's glasses so he looks more like his grandfather. As "Illumination" starts to arrive, he is without those lenses.

(He does have an inner life. In the deleted scenes, he imagines getting awards for his collection. Still, he barely smiles.)

From the start, Alex is clearly trying to figure out Jonathan. He is concerned about the history he is only learning now--that Ukrainians may have been anti-Semitic before the war, for example--after he may have been doing these "heritage tours" with Grandfather before. Maybe not. He is 21 and Grandfather hasn't done these tours since Grandmother died two years earlier. But, Father has. Alex specifically references these tour as the reason he "had the opinion Jewish people were having shit between their brains"--he just doesn't understand why they would leave America to "vacation" in Ukraine.

(Alex's big deleted scene involves more bragging about how great he is after the "premium dancer" bit. Like the other deleted scenes I've mentioned above, I think the film is better off without this flight of fancy.)

Though this began as the real Jonathan Safran Foer's fictionalization of the "rigid search" he might have gone on, the history he might have found, in this story--the film version especially--Foer is just a vehicle for the audience to come into these other people's lives. Alex's life. Grandfather's life. Lista's Life. Even Augustine's and Safran's.

This is not about Jonathan's life. His presence is incidental at best.

I wish I had read the novel--there's more of Jonathan in an invented narrative of the history of Trachimbrod and letters back and forth between he and Alex (or so I've heard)--because Jonathan might be less of a cypher. Still, there's something of a discovery about self for Jonathan, even if he doesn't express much of a response to it, and there is certainly a discovery about self for Grandfather and for Alex. Alex tells us that he "was of the opinion that the past is past and like all that is not now, it should remain buried along the side of our memories." He doesn't think about the past. Grandfather even more deliberately does not think about the past. He erased his past when he removed his coat with the yellow star. Returning to it is something he probably would not have even done if not for the depression that followed the death of his wife... when, he began to wear dark glasses and claim he was blind.

And, thought he kills himself, I don't think we are meant to see it as a negative thing. He is at peace. He finally got to be himself again after half a century of living a lie, and he was, I suppose, ready to go.