George's post-firing rage bit reminds me of Johnny Baxter's in Snowball Express, a little over the top... a lot over the top, but still understandable. And, Snowball Express is a movie that very much ties into my childhood, a movie we had on video and watched often.

Life as a House, on the other hand, is a link back to a very specific moment in my life. Movie came out October 26, 2001. The next Wednesday, Halloween, I would meet in person for the first time the woman I would marry the next March. I knew she was coming. I was probably in a good mood. But, I'd spent a good part of my 20s depressed and/or lonely. I don't know really know if this film goes too far into the realm of schmaltz (the bit with the nurse, maybe) or if it offers up a nice even portrayal of damaged people and damaged relationships in the face of grief and death. I just know that it felt genuine when I saw it then, and it feels as genuine when I watch it now. I may have been headed into something good, may have been looking forward to a better life than I had been having, but the sadness, the brokenness, here--I felt that deeply. My previous relationship had lasted about a year, had ended five months earlier. Some of that pain was probably still fresh, even if new feelings and new hope for the future were dulling it.

I had made a habit of seeing movies by myself since I was a teenager. The week before I saw Life as a House, I saw From Hell, its opening weekend. Pretty sure I saw that one by myself, but I also had seen Riding in Cars with Boys with my sister that weekend. The weekend I saw Life as a House, that was (apparently) the only movie I saw in the theater. I was living in my parents house, most of my stuff squished into what used to be the dining room, the rest of my stuff (books mostly) stored in the garage. I was writing and drawing a comic book called Wannabeheroes at the time. It never went very far. I wasn't consistent enough in my artwork to have time or the inclination to keep up with the pages I needed to put out if I wanted to really go somewhere. Ended up scripting nearly 20 issues, outlining a bunch more, only fully drew two of them, plus part of the third. Perhaps naively, I would have copies of the first two issues for sale, along with some other minicomics, at my table at the Alternative Press Expo in San Francisco a year and a half later. I had a temp job over the summer since I'd gotten back to California, but wasn't working that October. But, I had some money, and that meant I could afford the occasional movie. (Plus, I had to make up for seeing almost no movies while I was living in Tennessee and Arkansas the year before.) The next weekend, Sarah and I would see Monster, Inc. opening night. Our first movie (in the theater) together.

I was only 25. I didn't feel old yet. I wasn't a father yet, or a husband, certainly not an ex-husband. But, something in this film clicked for me. I don't know. It just seemed more thoughtful, more meditative, than other films like it. Plenty of films about people dying, plenty of films about broken families healing, probably plenty that combined the two, though I can't think of any at the moment... Marvin's Room, I suppose. In the movies (and presumably in real life), dying always teaches you something about life. Something profound. It makes sense. I've argued in this blog before--no link because I really don't know the specific entry(s)--that everything in life that matters only matters because it is temporary, finite. What better perspective than knowing that you are close to death to really focus in on that finiteness. 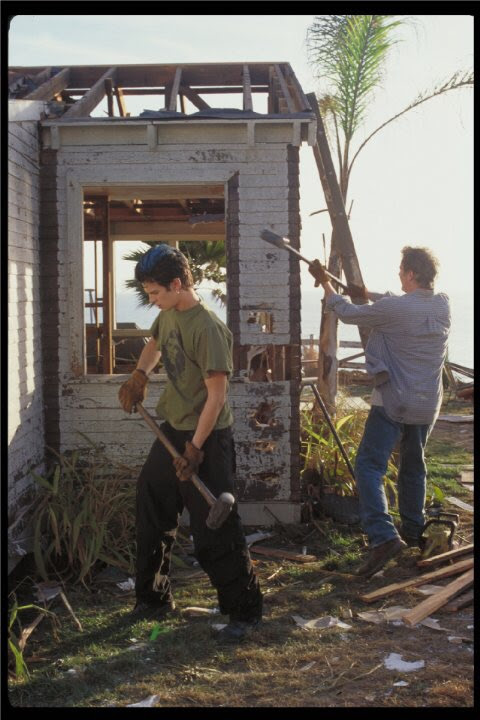 But why wait for your mortality to rear its ugly head to look at life and figure it out?

Seems too late (though not too little).