Honestly, though I'm a vegetarian or whatever, I don't much care, as PETA did, that the cast ate wolf stew to get into the mood for the film. Now, I don't know the status of wolves in Alaska currently, endangered or what have you. There was a bit of a controversy at the time, though. Liam Neeson, unlike his fellow cast members, went back for seconds. PETA complained: "Neeson's stance on kindness to animals is sorely out of step with the rest of the world." Out of step with PETA maybe. The rest of the world? Not so much. The rest of the world seems to be just fine with torturing animals to get some meat to eat.

A couple notes: the film was shot in Smithers, British Columbia. It is legal to trap and kill wolves in British Columbia (or was at the time; maybe that's changed. I don't know). Wolf stew (or the use of wolf carcasses in the film) was not illegal. I was going to point out that Liam Neeson also is not an American citizen (while PETA is an American organization) but apparently, he became a US citizen after his wife died (i.e. not long before this film was in production).

Dick McDiarmid, the trapper who sold four wolf carcasses to the production was "surprised that people would want to eat a wolf" according to The Examiner. "He also was surprised that the movie portrays a wolf pack relentlessly hunting a group of humans. That just doesn't happen in real life, he said."

National Geographic talked to Daniel MacNulty, a wildlife-ecology professor at Utah State University. In 16 years studying wolves at Yellowstone, he says, "I have never been approached by a wolf or wolf pack." Asked about Ottway's suggestion that the wolves "a) have a 300-mile hunting radius, b) will attack anything that comes near their den, and c) 'are the only animal that will seek revenge'" (To be fair, Ottway does not offer that last one.) MacNulty replied: "No. Nonsense, all of it." The omega testing the men's defenses is "pure fiction" according to MacNulty. And, finally, asked if the mini liquor bottles would give Ottway a chance against the alpha, MacNulty replied:

If I was lucky enough to encounter a large gray wolf in the wild, he would turn and run before I could tape the first bottle to my hand. Most people don't realize this, but wolves are wimps. 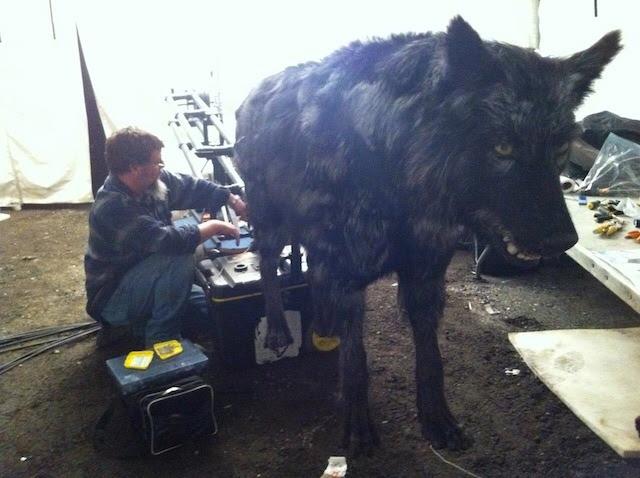 These aren't really wolves in The Grey. And, I don't mean because they used CGI and animatronics. I mean because within the context of the story, these just aren't wolves. Not really. These are something bigger, badder, meaner, something that plans and connives and comes at men and make them doubt. These are demons. You know, forget everything I said yesterday about this being an atheist film or whatever. This could be taken almost as readily as pro-faith. These men have been tempted to evil--Ottway tells us in voiceover that they are "ex-cons, fugitives, drifters, assholes, men unfit for mankind"--yanked out of regular, everyday, life. These are the dregs of us. They should be more readily beaten by these demons, more readily destroyed because they have already turned to darkness. So, as long as they keep fighting, it gives us hope. If they can manage against this satanic horde, we certainly can.

Even without God or demons or faith or what have you, there is this sense with The Grey not necessarily just of bleakness but something... else. These men keep going even when all is clearly lost. They walk away from a plane crash. They walk away (in increasingly small number) from wolf attack after wolf attack. They leap from, then dangle from, a rather high cliff. They keep going. This doesn't have to be taken as a story about the inevitability of death, but the inevitability of life. I've quote before, Hemingway's line: "Every man's life ends the same way. It is only the details of how he lived and how he died that distinguish one man from another." The key to The Grey is not that they all (presumably even Ottway, but we'll cover that another day) die, but that they all keep living. Diaz (Frank Grillo), the only one who really gives up, only does so when every step hurts. Even then, he admires the view. "I feel like that's all for me," he tells Henrick (Dallas Roberts), "How do I beat that? When will it ever be better? I can't explain it. I don't have the words." The beauty of the natural world is enough for him just then, injured enough that the wolves will get him. With death before him, he chooses to see something more beautiful.