(I'm not even sure that it's a coincidence that both of Foer's novels involve an old Jewish man who was close to two young women when he was younger; when Lista says her mother thought Safran should marry Augustine because she was older, it reminded me very much of Anna and her sister in Extremely Loud and Incredibly Close. Both of the primary plots are driven by objects, as well--the photograph in Everything Is Illuminated, the key in Extremely Loud and Incredibly Close, but I don't think I'm dealing in objects today.)

These people look alike because this story is universalizing. It seems a part of the human condition that we want to know where we come from, and that's vital to the story of this film. But, also important is the idea that we all want to understand others and be understood by them as well. We want to relate our stories to their stories and vice versa. The book Everything Is Illuminated is built even more than the film is on Alex and Jonathan getting to know one another.

It's more than just Alex and Jonathan. It is all of us. 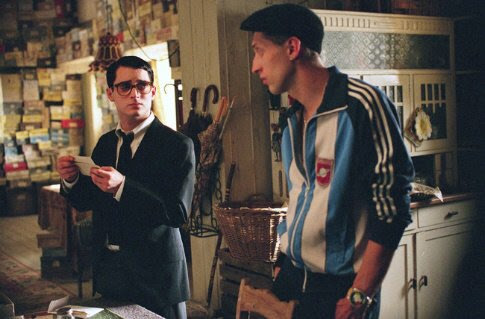 It seems a specific comment on the doppelgängers and interpersonal links through space and time that Grandfather's dog is called Sammy Davis, Junior, Junior. Sammy Davis, Junior, of course, is already named after someone else, his father. The dog's name is an echo of an echo. And, (in the deleted scene and, I assume, in the book) the dog is enamored with Jonathan Safran Foer, who is an echo in face and name of Safran Foer.

Viewing note: they have just driven past the same group of four goats at least three times. One could take it to mean they are lost and keep passing the same location, but I don't think that was the point. Sure, practically-speaking, it probably just means that the production did not have an endless supply of goats, but I choose to assume in context of today's topic that these goats are echoes of one another just as the boy tending to the goats is echoed at the airport at the end of the film, just as the woman at the hotel and the men at the dig site are also echoed at the airport.

One of the most important echoes in the film is the two grandfathers. Safran left Trachimbrod a week before the Nazis came, so he lived, but he lost Augustine. Baruch, by luck really, survived the gunfire (drowning in the book) and denied his Jewish heritage to escape afterward. Each man left something vital to who he was in Trachimbrod. We can see that Baruch is a sad old man; maybe that comes from his wife's death two years ago, or maybe he's never been able to truly be happy because he denied who he was. (The moon--the first thing he saw when he woke among dead bodies--seems to haunt him when he sees it in the present.) Similarly, though the movie tells us nothing of Safran except that he clearly found another woman to marry in America, I imagine him to be much like Thomas Schell, Senior in Extremely Loud and Incredibly Close, a man who lost his ability to speak because he hurt too much after the girl he loved was killed. Thomas' grief, like Baruch's anger, suggests a deeply rooted pathology built on pain.

Taking this pain outward, metaphorically, it is like Foer is attempting to express a ethnocultural pain much larger than this personal story. Go back to the discussion the other day about poetry after Auschwitz. How better can the pain of a thousand dead (in this specific, fictional story) or six million dead be expressed than in a story--or go to a Holocaust Museum or the USC Shoah Foundation and listen to numerous stories. A book like Foer's, or a film like this one--it boils that down into less time, makes it available to more people, potentially. Schindler's List may be a better example. It opened at #14 at the box office, though only showing on 25 screens. It went on to win numerous awards, including seven Oscars (for Art Direction, Cinematography, Film Editing, Original Score, Adapted Screenplay, Director and Best Picture). I was out of high school by then, but I know the next year my school was one of many to show that movie to students. It made the holocaust--if in a simplified package--more accessible, more relatable, and it turned an almost unfathomable concept into something not only self-contained enough to be understood but also something entirely moving. After making that film, Steven Spielberg established the previously mentioned USC Shoah Foundation. From 1994 to 1999, the foundation collected 52,000 interviews. It now has some 107,000 hours of video testimony, and it has expanded to other genocides. While such a database is an invaluable resource, it is also much bigger than most people will have time for. For those with less time, there is--just taking a few popular ones since Schindler's List--Life Is Beautiful, The Pianist, Defiance, The Reader, The Boy in the Striped Pajamas... and so many more. One little known one that occurred to me was The Last Butterfly (which, I think, Life Is Beautiful may have drawn on for inspiration), and a quick google search for details found me a poem by Pavel Friedman, written (apparently) while he was at the concentration camp Terezin (he would later be transferred to Auschwitz, where he would be killed).

The last, the very last
So richly, brightly, dazzlingly yellow,
Perhaps if the sun's tears would sing
against a white stone...

Such, such a yellow
Is carried lightly 'way up high.
It went away I'm sure because it wished to
kiss the world goodbye.

For seven weeks I've lived in here,
Penned up inside this ghetto
But I have found my people here.
The dandelions call to me
And the white chestnut candles in the court.
Only I never saw another butterfly.

That butterfly was the last one.
Butterflies don't live in here,
In the ghetto.