i told you, call me bronco

(No recap today. The last one was Day 608 - teens tonight. I should have one today--got 28 days of identity movies and 32 days worth of Westerns to recap--but I did not have time to prepare the list of links ahead of time. For my thesis work, I'll have a complete list of every entry and all the links put together within the next month, so expect a good recap on Day 730... which may be the last entry of this blog.)

For today, though, the approach is simple: Groundhog Day is a Western. 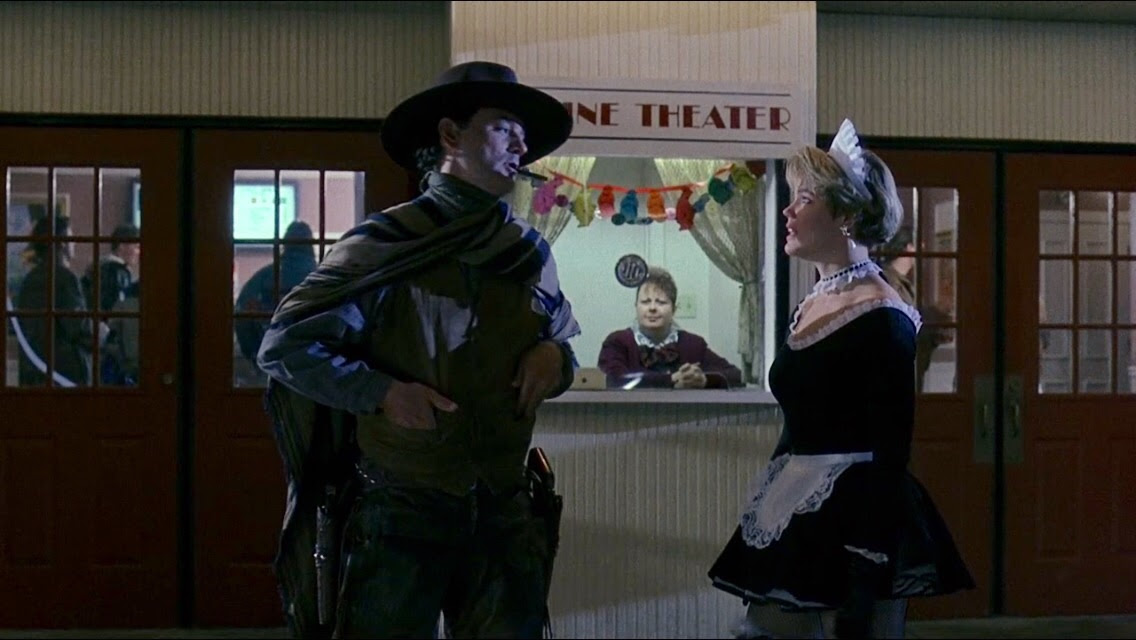 (First, I suppose I should explain something. Phase 2 of this blog ends after this month, just today's viewing of Groundhog Day, four weeks with four different movies, then another viewing of Groundhog Day. And, I'm mulling over options beyond that. I could continue as I have been--but no more variant* months like that last one; different movie every day, but same theme, and I've got to pay too much attention; it's exhausting. I could quit. Give myself some free time... but for what? You know what my impulse was when I thought I'd have a couple hours free every night? To watch some movies. So, then there's the other blogging option, watch a different movie every day...

I don't know. I'd like to do something different. I would love to go back to some ideas I had when Phase 1 was ending--do a YouTube thing or a podcast thing--still movies but not daily and not so much writing. I have learned, by experience but also in recent research about blogging, that longer entries mean less chance of an expanding readership. And, short entries... I'm not inclined toward them. Unless I were doing a different movie every day, maybe movies I'm watching for the first time; then, I'd be inclined toward shorter entries because I'd likely write after the movie instead of during.

On the one hand, more time would be good. On the other hand, what would I do with it? On the third hand--because I have three hands in this scenario--the point to my thesis is (going to be) that blogging has helped me keep a handle on my life these past two years, that I've used it (and others could use blogging as well) to maintain my self, to create my identity. A habit of two years will be hard to break, anyway. But, I think I'm also afraid that without this blog, I might have less of a sense of control over my life.

(Or, I could just watch Groundhog Day every day again.)

I've got a month to figure it out.)

As I was saying, Groundhog Day has the classical plot of a Western. With one very notable distinction, which I will explain as I go.

1. The hero enters a social group.

Phil Connors arrives in Punxsutawney. Of course, pre-loop Phil wants nothing to do with these people. But, he hasn't a choice.

2. The hero is unknown in the society.

In Pittsburgh, maybe Phil is somewhat well known. He's local weather, dreaming of bigger. In Punxsutawney, though, he's just another reporter on the job for Groundhog Day. Doris does seem to at least think he's attractive if she doesn't actually recognize him.

3. The hero is revealed to have an exceptional ability.

Time loop covers this, but as the resumptions continue, he gains more abilities.

4. The society recognizes a difference between themselves and the hero; the hero is given a special status.

I suppose this step comes out of order in Groundhog Day. Phil's difference is unknown to the people of Punxsutawney, and he is really only given a special status on the last day of the loop. But, taken in order, I suppose one could argue that Phil's special status comes on Day 3, visiting the doctors and hanging out with Ralph and Gus. Just because they can't remember his special status doesn't mean it goes away...

5. The society does not completely accept the hero.

6. There is a conflict of interests between the villains and the society.

Here's where Groundhog Day gets tricky. See, there is no exterior villain. Phil Connors is both hero and villain, battling against his own selfish interests and pseudo-adolescent whims. So, the conflict here is both early-loop Phil's hatred of the town, and his manipulation of it. Now, the people of Punxsutawney might not even know there's a conflict, but within each of those resumptions--and I'm typing this as he's Phil Connoring Nancy--they are being used.

Well, yeah, they're hicks, Rita. Of course they're weak. Nancy falling for Phil's schtick serves as case in point. She's just naive enough, or shallow enough, or she has low enough self esteem that she would rather believe him outright than admit that she can't really remember him from Lincoln High School. And then, she finds his proposal of marriage as anything other than creepy? Yeah, he's got the advantage.

8. There is a strong friendship or respect between the hero and a villain.

Since they are one and the same--see my discussion of Bacha's (1998) idealizing mirror--the relationship is not something that we get to see explored too explicitly. Without the voiceover of the original script--and let us be glad that is gone--we can only gauge Phil's transformation (and the status of the conflict between his good and bad side) by his actions. Recall, if you've been here long enough, my entry about the Jungian shadow, in which I argued that Phil's shadow is internal. Phil's shadow, then, is the villain.

9. The villains threaten the society.

This one is weird. Phil cannot really threaten Punxsutawney. But, that doesn't mean they wouldn't feel threatened when he steals their prized groundhog and kills it and himself in a fiery explosion.

10. The hero avoids involvement in the conflict.

This would correspond to Phil's depressed period, electrocuting himself in the bathtub, stepping in front of that truck, diving off the hotel tower. The hero and the villain are in conflict because villain Phil has been toying with the people of Punxsutawney, Phil Connoring them into who knows what. Hero Phil hasn't figured out how to do anything about the loop yet. He's at a loss and he opts out.

11. The villains endanger a friend of the hero.

This comes before the previous point for Groundhog Day. This is villain Phil not only Phil Connoring Rita into his room but then trying to physically keep her there. Hero phil barely exists at this point, but since most of this film takes place within that same day (repeated), he does exist. Third Act Phil exists simultaneously with First Act Phil. Rita is a friend to Third Act Phil, even if neither she nor he knows it yet. But, villain Phil has lumped her in with everybody else; she is usable.

12. The hero fights the villains.

Internally, of course. After hitting his rock bottom, villain Phil just has nothing left. But, hero Phil has nowhere to go but up.

13. The hero defeats the villains.

Which he does. By reading books, by learning the piano, by ice sculpting, and then by--

--helping Zacchaeus when he falls from the tree, changing the three old ladies' tire, saving Buster from choking, even fanning the flames of Debbie's passion for Fred, he makes the society safe. Sure, he cannot save the old man O'Reilly, but he does his darnedest to save everyone else.

15. The society accepts the hero.

And, they embrace him for it. In the end, Phil Connors is beloved in Punxsutawney.

16. The hero loses or gives up his special status.