at the end of the world

Not everyone goes to Alaska to be free. Ottway (Liam Neeson) does go there to escape a painful life, though, which isn’t that much different from Chris McCandless. Not everyone goes to a movie to escape. I go to movies sometimes to identify with characters or plotlines, to feel great joy or great sadness when real life is offering the opposite or is offering nothing. 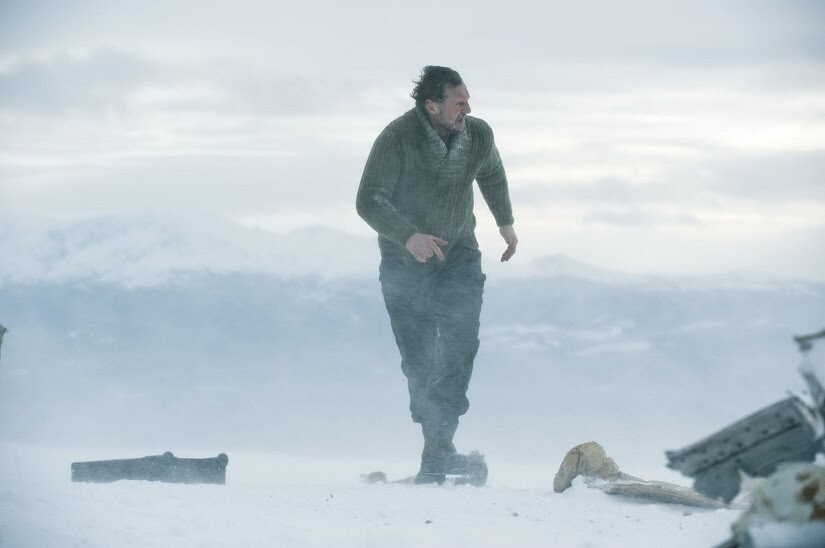 The Grey movie puts me in time and place. Two of them, actually. Well, same place, two times. Though this movie came out just before my wife and I separated, I didn’t see it until a few weeks later. Winter quarter is a busy time in forensics and there were speech tournaments almost every weekend for a while there. Hell, the day after I was out of the house, my birthday in fact, I was at a speech tournament. My dark mood made one of my interpretive pieces go very well, and my other stuff not so much.

The death of Lewenden (James Badge Dale) lets you know early on that this will be a painful film to watch. Death isn’t glossed over. It’s felt.

When I saw this movie a weekend or two after my wife and I separated, and I was sleeping on the floor of my sister’s apartment, I was just fine with feeling that pain. This movie appealed to me a lot. Two, three weeks later, I’d go see it again (at what was for those several months of our first separation my regular theater) with my son.

The thing is, this movie didn’t just hit me because of the throughline of Ottway being without his wife. It hit me for bigger reasons. The movie isn’t just a generic survival-in-the-wild movie; reviewing the film for The Guardian, Philip French describes the immediate aftermath of the plane crash that gets the story rolling as

initially commonplace: exciting survival stuff, if a trifle talky, in which the freezing , frightened group alternately bicker and bond. An hour in, the half-time score is “Wolves 2, Oilfield Roustabouts 1”. [I think the wolves are ahead by more than that, at that point.] Then the tone steadily changes , and it’s apparent the filmmakers have something more ambitious in mind than a conventional survival thriller moving towards a triumphalist ending. This is an existential, God-baiting fable where the wolves are agents of destiny and the isolated protagonists must confront their individual fates, and the effect is as chilling as the weather.

I think the tone was already set as something other than a basic survival picture. Reference to the movie Alive suggests a self-awareness that indicates deliberateness, as well. Ottway intends to kill himself at the start of the film. Lewenden’s death freezes the action to create a moment that sort of meditates on death and dying. The tone is already leaning toward something different.

(I’m looking at the box office, the weekend The Grey took #1. Despite a busy January (and February), I had managed to see a few of the films on the list. Extremely Loud and Incredibly Close. The Descendants. Mission: Impossible: Ghost Protocol. The Artist. Hugo. Sherlock Holmes: Game of Shadows. The Girl with the Dragon Tattoo. War Horse. We Bought a Zoo. And that’s just in the top 20. (Top 40 adds Tinker, Tailor, Soldier, Spy, The Devil Inside, Puss in Boot, A Separation, The Muppets, Shame. Top 60 adds Real Steel, We Need to Talk about Kevin, Young Adult, Moneyball and In Time.) Those weren’t all seen in January. Some of those were Oscar hopefuls, got early releases in December. Some I probably didn’t see until February, as the Oscars approached... actually, I just checked and the awards were February 11th that year, so there wasn’t much approach left. I’d been watching the Oscars every year since I was a kid, had started making a concerted effort to see as many of the nominated films as I could since the mid-90s, had been having an Oscar viewing party at home for a handful of years. There would be no party that year.

Even now, watching this movie again after not having seen it for a while, I find myself just sitting here watching it more than writing. It is—and maybe this isn’t the best word—captivating.

One more note before I go for today. This movie includes actors from several movies I’ve already watched for this blog. Dallas Roberts (Henrick) was Grayson Butterfield in the remake of 3:10 to Yuma. Joe Anderson (Flannery) was Max Carrigan in Across the Universe, Dermot Mulroney (Talget) was Dirty Steve Stephens in Young Guns. Like old friends come by to visit.

Come by to visit with a nice depressing existential tale about the struggle that is life.