nobody showed me how to do this

Sometimes I have very little interest in writing about film because film reminds me of life and life is, of course, more important. I saw Creed tonight (and I'll offer up a brief review in a moment) and it got me thinking about my pet subject here since the Groundhog Day days--identity, how we choose (or don't choose) to be who we are. Creed hinges on both identity and the much simpler--or far more complicated--Hamletian dilemma, "to be or not to be." Or, on a more literal level within this story, "to fight or not to fight." To fight in the ring or--and, not this is not much of a SPOILER because trailers already gave away the film's second "pinch"--to fight cancer.

The film hits the same basic beats as the original Rocky, with a few nice echoes of beats from other films in the franchise--notably Rocky III and Rocky IV... probably the others as well, but I have seen those two entries more times than the others, so I am more familiar, and can more readily recognize nods to those stories. If you do not know the premise, Adonis "Donnie" Creed nee Johnson (Michael B. Jordan), illegitimate son to the late Apollo Creed moves to Philadelphia to get Rocky (Sylvester Stallone, in an occasionally painful (in a good way) performance) to train him to fight legitimately--he's been fighting in backroom fights in Mexico and really, that's the heart of the story--Donnie looking for legitimacy and acceptance from a father he never knew, Rocky looking for family when he no longer has anyone. These men find their selves in (and around) the ring. The good thing--and I think I remember them already heading this direction in Rocky Balboa--is that Rocky no longer resides in a mansion, and Donnie quickly abandons his own (he has been raised for half his life by Apollo's wife (Phylicia Rashad)). The movie sets itself in the Philly of the original, in old gyms, in dingy apartments, in the streets. It mostly keeps itself honest to its story and you may get the sense that, like in the original, Donnie may actually lose his big fight in the third act.

I will not SPOIL it. Even though, like many a sports film, it would not be very much ruined by SPOILERS. 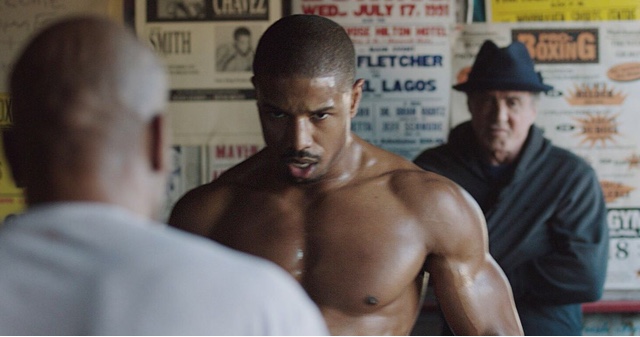 What interests me tonight is not the film itself but the...

I'm thinking about self. About my self. We're coming up on December next week and soon people will be making New Year's Resolutions. I don't make those, but I do make new week's resolutions, new day's resolutions. I make plans to change who I am for the better, and I usually just end up maintaining the man I've become lately. Take this morning, for instance. I woke up ready for the day, had some energy and didn't mind that my usual stop before my 8am classes--Starbucks--had no parking spaces, just drove on past, got on the freeway and headed for school. Figured--along the way--who needs caffeine anyway? New Day's Resolution: taking a break from caffeine. The quarter's almost over, then winter break, time to get some sleep and relax. But, I get to campus and walk past the Starbucks there and the line is short for a change, and soon as can be I'm drinking down some caffeine in my office and forgetting all about the new me.

Not that the current old me is all that bad.

And, I like the setup in this phase three of the blog, choosing movies as I go, choosing me as I go. I can watch Ex Machina for 1 2 3 4 5 6 days, or watch some old 80s movie that has not stood the test of time--I'm looking at you, Wisdom--or a new movie in the theater, and the thing is, I do not need to invent a theme and find movies that fit it. Every movie fits every theme. Every theme fits every movie. It's simple.